Star Wars: The Force Awakens syncs up to Pink Floyd’s Dark Side of the Moon

Move over, Wizard of Oz, there's a new album sync in the galaxy 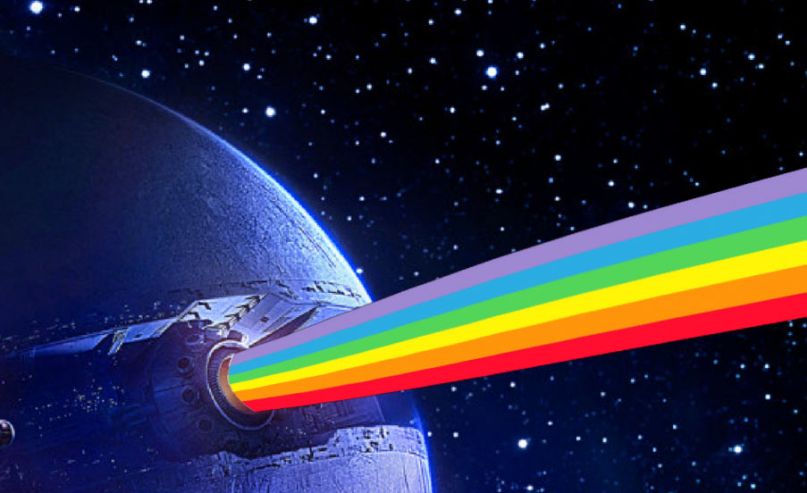 For years, Floydians have been syncing up Pink Floyd’s classic Dark Side of the Moon with Wizard of Oz. What’s affectionately referred to as Dark Side of the Rainbow sees the record played simultaneously with the film, revealing some pretty fantastic musical and lyrical coincidences that fit like cues to the movie. Now, Redditors have discovered another incredible sync-up for the album, this time in a galaxy far, far away.

Apparently, three replays of Dark Side of the Moon in its entirety becomes the perfect soundtrack for Star Wars: The Force Awakens. (The Floyd Awakens? Dark Side of the Force? Too easy?) According to Reddit, pressing play as the film’s opening scroll ends and the camera pans to the spaceship starts a synchronization that almost lines up perfectly with each act in the movie.

Here are some examples, though obvious spoiler warnings ahead:

– When Poe (Oscar Isaac) wakes up in Kylo Ren’s (Adam Driver) torture chamber, the lyrics of “The Great Gig in the Sky” go, “I’m not afraid of dying/ Anytime will do,” and the song’s scream happens right as Poe opens his own mouth.

– “Time” plays while we witness the repetitive mundanity of Rey’s (Daisy Ridley) life making a living by scavenging old electronics.

– The “Us and Them” lyric “And after all, we’re only ordinary men” is sung right as Finn (John Boyega) tells Rey that Resistance fighters look like him. “Some of us,” he says. “Others look different.”

– Twice during the “Keep your hands of my stack” line in “Money”, someone grabs a lightsaber: First it’s Rey taking hold of Luke Skywalker’s (Mark Hamill), then Han Solo (Harrison Ford) grabbing Kylo’s.

– “Us and Them” again syncs with the battle of Battle of Takodana. As Finn surveys the battleground, the lyrics go, “God only knows/ It’s not what we would choose to do.” Then, as David Gilmour says, “Black,” the camera focuses on Finn receiving Luke’s lightsaber (oof). Just as Gilmour says, “Blue,” Finn ignites the blue blade.

– In what turns out to be his final scene, the camera focuses right on Han Solo as the lyrics, “I never said I was afraid of dying” are heard.

– During Kylo and Rey’s final fight, the “Us and Them” lyrics go, “Black and blue/ Who knows which is which and who is who,” echoing the fight between going to the Dark Side or staying with the Light Side of the Force.

– “Brain Damage” in almost its entirety seems to fit up with the movie’s final scene as Rey makes her way towards Luke: “The lunatic is on the grass/ Remembering games, and daisy chains and laughs/ Got to keep the loonies on the path.”

Since Star Wars: The Force Awakens hasn’t hit a home release yet and we’re not ones to condone movie pirating, we haven’t been able to test this supposed sync by itself. As soon as this hits DVD though, we’ll be ordering out some, um, salad and trying this for ourselves. For more breakdowns of how the film and album lineup, check out the original Reddit post.