Tribeca Film Review: A Hologram For The King 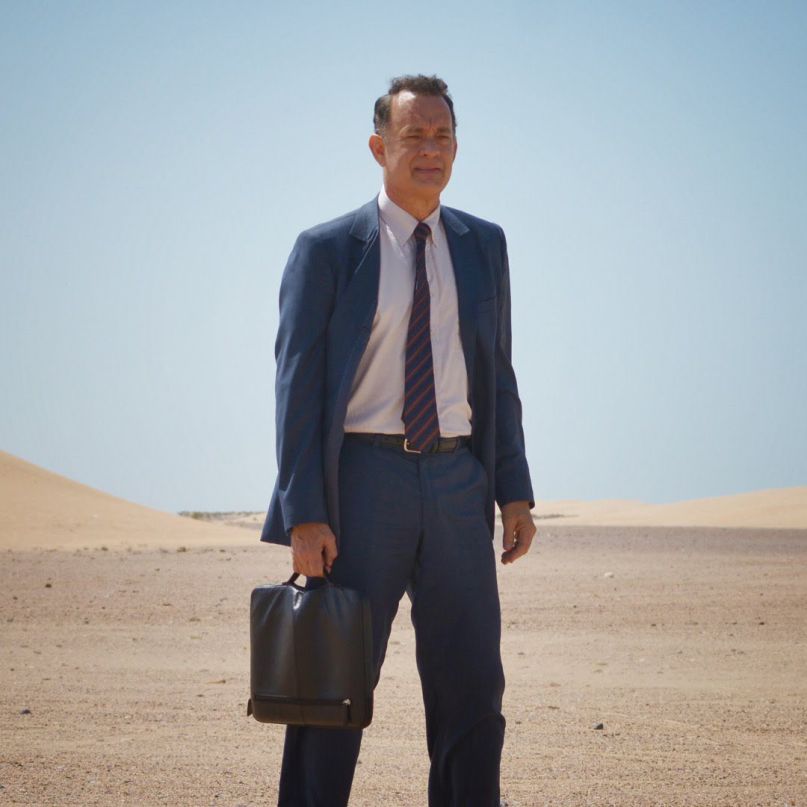 A Hologram for the King belongs to a select subcategory of cinema one could call the “Meh-stige Film.” These are the movies that look great on paper. They are serious films of sound pedigree from directors whose previous work you’ve likely admired. Prominent examples include All the King’s Men, Nine, and Goya’s Ghosts, each made for intelligent, discerning audiences. They are also not particularly remarkable.

And A Hologram for the King certainly sounds like a slam dunk. The film is adapted from the acclaimed 2012 novel by Dave Eggers, which was a finalist for the National Book Award. Its author has also been shortlisted for the Pulitzer, as well as nearly every other major literary honor. The project is helmed by Tom Tykwer, the German director behind the cult classic Run Lola Run. A Hologram for the King also stars two time Oscar-winner Tom Hanks, the very embodiment of professionalism and dependability. So why isn’t the movie better?

Like Danny Boyle’s Steve Jobs, A Hologram for the King is marred by the tension between its director and his source material. Tykwer, a kinetic auteur of limitless energy, struggles to marry his sensibilities to Eggers’ prose. His style is at odds with the film’s premise: after his divorce, Alan Clay (Hanks) accepts an offer to go to the Middle East. His company wants him to sell a futuristic video conferencing technology to the king of Saudi Arabia, who plans to build his own city in the middle of the desert.

There are, however, a few problems with this scenario. The King’s Metropolis of Economy and Trade (KMET), designed to rival Dubai, will be completed around 2025. You could call it a ghost town — that is, if anyone had ever lived there to begin with. When Alan arrives, the king’s hired hands are sweeping sand to stay busy. The royal himself is never around. One day he’s stuck in Jeddah. The next day he’s in Yemen, where he plans to stay for three weeks. Karim Al-Ahmad (Khalid Laith), his assistant, insists that the king will be able to visit soon enough. Alan wants to know just how long he will have to wait. Will it be days? Weeks? Months? “I hope not,” Karim responds. He doesn’t sound hopeful, but hope appears to be in short supply in KMET.

If Eggers’ novel is an elegiac tragicomedy, A Hologram for the King is too polished for its own good. The film is sleek where its source material is soulful, frantic where Eggers was content to let his images linger. KMET, a literal representation of the emptiness of global capitalism, is a powerful visual metaphor that its director never fully explores. If you’re going to build a giant city on a pile of sand, why not let the characters roam the terrain?

A Hologram for the King leaves itself little time to settle down, giving the audience no less than four different movies at various points. (It even makes room for a recurring motif involving the Talking Heads’ “Once in a Lifetime.”) The film is The Money Pit by way of Samuel Beckett at the same time that it’s a lament for the American Dream, a road-trip buddy comedy, and an opposites-attract romance. Only the latter lives up to its director’s breathless ambitions; after stabbing a mysterious growth on his back after a night of heavy drinking, Alan lands in the hospital. There he meets Zahra (Sarita Choudary), herself in the middle of a nasty divorce.

Throughout the film, Hanks has a difficult time selling himself as a sad sack. The audience is supposed to believe that Alan is a faded Willy Loman type at the end of his professional rope. As a member of its board in the 1980s, Alan was behind outsourcing Schwinn’s manufacturing to China. The decision destroyed the once-successful bicycle company, and it has haunted him. In the years since, Alan has racked up a failed marriage of his own and a daughter whose college education he can’t afford. But Hanks, the closest thing modern cinema has to Jimmy Stewart, never comes off as defeated or spent. Even when he’s down, he always seems like he’s running the show with ease.

In his scenes with Choudary, however, Hanks finally syncs up with his character — at the same time that his director comes down to earth. After an operation to have his cyst removed, Alan complains that the procedure was too successful. “I don’t have anything to blame my problems on,” he laments. After getting the courage to ask her on a date, Zahra invites him over to her home, nestled on a picturesque shoreline. Their conversation hints at unspoken longings. Alan observes a painting of a mountain in her living room and comments that it’s “strange in a beach house.” She responds, “Everyone wants to be somewhere else.”

Shot by cinematographer Frank Griebe, Tykwer’s longtime collaborator, there’s a gorgeous sequence of the pair going for a dive that’s almost worth the price of admission alone. Zahra explains that to avoid being seen by the neighbors, she’ll have to go underwater wearing only a pair of men’s trunks. Should they be spotted, onlookers will mistake them for two men. While submerged, Alan and Zahra are enveloped by a school of fish as they share a secret kiss. The moment is a total stunner.

A Hologram for the King finds itself busy with so many themes and disparate ideas, trying hard to live up to the high expectations set by its dream team of collaborators. But in its final moments, the film finally remembers to aspire to something higher than prestige. It makes the viewer care.