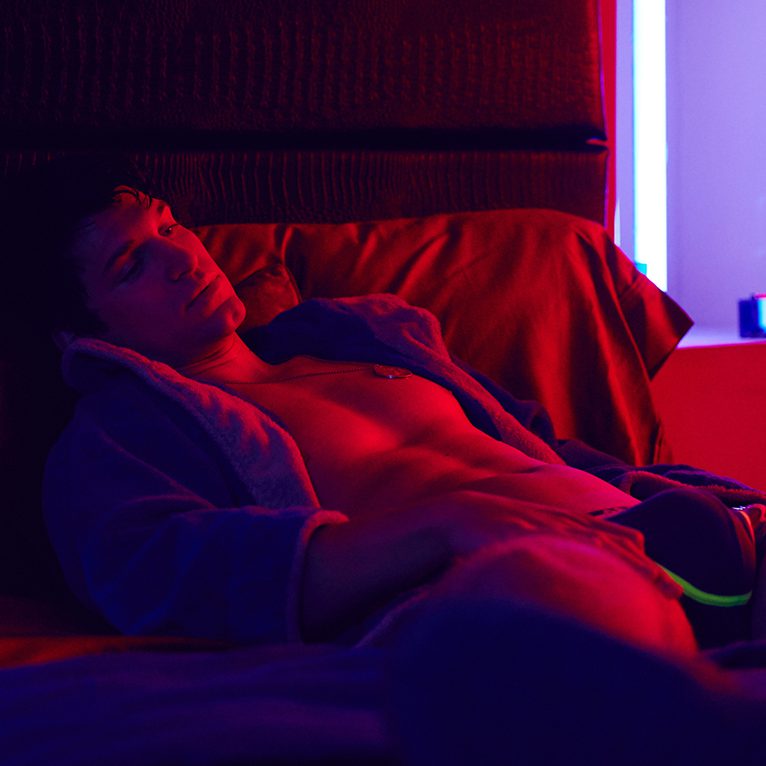 It’s within the same storytelling tradition as All About Eve and the backstage showbiz dramas of the 1940s and ‘50s, in which a woman’s ambition was a weapon of mass destruction: an aspiring actress leaves home to become a star. In order to ascend to the throne, the protagonist must depose the queen that came before her. Where the duplicitous, cunning Eve Harrington knew how to play the game, the wide-eyed, innocent Corrigan is in over his head. The budding talent meets with other producers to sign with them, but the problem is that, as Kocis reminds him, Brent Corrigan doesn’t exist. He’s Kocis’ legal property.

Like Dirk Diggler in Boogie Nights, Corrigan is less a person than an object onto which others project their desires. For Kocis, the young man represents an opportunity the producer never had. Kocis, who was 45 at the time of his death, came of age during the HIV crisis, a terrifying, isolating time to be gay in the United States. “You’ve got the Internet to so you never have to feel alone,” Kocis tells Corrigan. “I feel like I’m just making up for lost time.”

If the baby-faced Clayton is a capable blank slate, it’s Christian Slater who makes their scenes together pop. In movies like Heathers and True Romance, the star spent his early career imitating Jack Nicholson. When Slater hosted Saturday Night Live back in 1991, he defended himself against accusations that his onscreen delivery, always with a wry smirk, was intended to rip-off the beloved actor. Two and a half decades later, Slater appears to have taken the criticism to heart. Now 46, his former heartthrob looks have grown into something far more distinctive and interesting. His weathered features have taken shape and definition, his high cheekbones turning razor-sharp with age.

The Slater of today cuts an inscrutable, slightly fearsome presence. He’s become the kind of man you wouldn’t want to meet in a dark alley. And coming off his Golden Globe win for Mr. Robot, he’s rarely been better than he is here. His Bryan Kocis is both carnivorous, eyeing Corrigan like a panther hungering for a field mouse, and wounded. The character could have been a cartoon image of a seedy producer who preys on young men, but Slater gives him a soul.

Outside of these scenes, however, King Cobra is hobbled by miscasting. Alicia Silverstone’s appearance is enjoyable as a piece of movie trivia: In Clueless, she played Cher Horowitz, who attempts to cheer up a forlorn friend by offering to take her to see the “new Christian Slater.” But as Corrigan’s supportive mother, who thinks that her son has landed a coveted internship, Silverstone is implausible. Silverstone is a decent comedienne, but she has no eye for camp; if the film constantly tows the line of kitsch, her performance is the wrong kind of bad. Eighties icon Molly Ringwald also pops in as Kocis’ sister, but her presence is distracting; she’s simply too famous for such a minuscule role.

Allen and Franco are better at playing vapid killers driven by desperation, and it’s clear that Kelly sees this story as In Cold Blood set in the adult entertainment industry. Harlow and Joe hope to launch their own porn empire, called Viper Boyz, and they know that snaring Corrigan will make their website into an A-list destination. They are determined to get him, at whatever cost. A scene-chewing Franco, who helped produce the film, is clearly in General Hospital mode. His performance is intentionally over the top, twisting his proverbial moustache with abandon, but it’s intermittently enjoyable. Franco knows what kind of movie he’s in.

As a visual filmmaker, Justin Kelly certainly gets the look and the feel of this world exactly right. Defiantly unpolished, King Cobra is filmed in low-gloss hues. Set in the fenced-off backyards and swimming pools of Southern California, all of the expensively seedy décor (a kind of nouveau retch) isn’t nearly as glamorous as its characters seem to believe. Tim Kvasnosky’s electronic score, reminiscent of Drive, is effective at highlighting this discrepancy.

What the film lacks is much of any commentary on the adult entertainment industry itself. As a satire of SoCal gay porn subculture, King Cobra could have been a little blacker, a little funnier, and a lot naughtier. Kelly often holds back when he should be digging in, afraid to get too close to his characters. During a scene where Corrigan discusses working with Viper Boyz — and potentially gives them the greenlight to kill Kocis — Kelly films them in a long shot that feels overly detached. King Cobra never goes more than skin deep, but at least the surface is nice to look at.