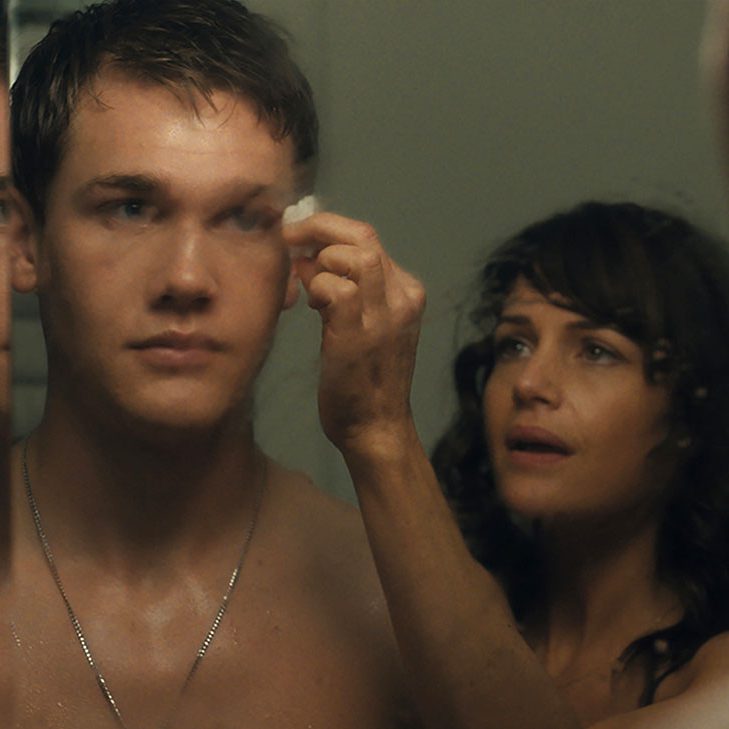 Wolves is something you’ve seen a million times before. The sixth feature from Bart Freundlich (The Myth of Fingerprints) is so by-the-book that you can practically hear its director calling the plays. The film doubles as a predictable sports yarn about a Very Special Young Man overcoming the odds and an overwrought tragedy about fathers, sons, and the half-baked plot devices that come between them. Wolves is more affecting than it should be by virtue of its cast, who deserve better, but the drama is so schematic that their Herculean efforts leave little impact.

The film is roughly sketched like the first draft of a short story in a freshman creative writing class. Anthony Keller (Taylor John Smith) is the star player of his high school basketball team. Anthony dreams of going to Cornell, but after reviewing his tapes, the recruiter warns that Anthony lacks drive. Rather than going for the shot, he’s content to pass the ball to another player. Anthony has the skill, but he doesn’t seem to want it badly enough.

Aiding Anthony in his quest for greatness is a former pro basketball star (John Douglas Thompson) who appears, as if out of nowhere, to teach Anthony important life lessons and tell him to believe in himself. The character — whose name is billed as Socrates but may as well be “Bagger Vance” — is so devoid of depth or nuance that it would actually make more sense if he were merely a friendly ghost. For instance, if you have to ask whether Socrates shows up just in time to root Anthony on for the Big Game, don’t let me ruin it for you.

Wolves isn’t just over-reliant on cliches, it’s made of almost nothing but them. Anthony’s seemingly perfect home life is shattered when it’s discovered that his father, Lee (Michael Shannon), has racked up more than his fair share of gambling debts. Shannon’s patriarch could be described as a domineering Great Santini type, who loves through discipline, but he’s clearly abusive. Wolves shows its hand in its opening scenes: Lee, a college professor, gives his son a lesson in how to evade defenders on the court by socking him in the chin. No one appears to find this odd.

Shannon is characteristically good here, but it might have been wiser to cast someone against type. In Wolves, Shannon looms over each scene like an impending storm. After deciding to sell his wife’s cabin, Lee plays the world’s most portentous game of basketball with his son. The match’s violent conclusion is so foregone that you wonder why his wife (Carla Gugino) would allow her kid within 50 yards of this guy. Gugino, an underutilized actress who exudes emotional intelligence, does the best she can with a character who helplessly watches her family unravel, but she’s simply too smart to play a bystander.

Smith, a dead ringer for Logan Lerman, is much better than he needs to be in an oddly underwritten role. Freundlich’s screenplay mistakes throwing obstacles at his lead for dramatic texture. Anthony accidentally impregnates Victoria (Zazie Beetz), his ever-understanding girlfriend. She loves him, but Victoria isn’t sure whether she wants to go to school in the same state as Anthony, let alone raise a kid with him. Smith’s work in these scenes is wisely interior. Anthony is written as a Tobey Maguire-type, a blank slate who says little and exudes even less, but the young actor’s performance suggests volcanic reserves of anger his character isn’t ready to express.

If Smith carries the film with ease, the film’s shortcomings rest squarely on its director. After the success of The Myth of Fingerprints at Sundance 22 years ago, Freundlich has yet to mount a worthy follow-up. He was the director behind Trust the Man, a grating relationship dramedy that also skated by on its actors’ merits. His last film, the Catherine Zeta-Jones rom-com The Rebound, went straight to DVD. If Wolves escapes the same fate, it’ll be an at-the-buzzer upset more interesting than anything in the actual movie.