Islands – Taste / Should I Remain Here at Sea?

Nick Thorburn and co. release two albums that together mend the fractured halves of a broken heart 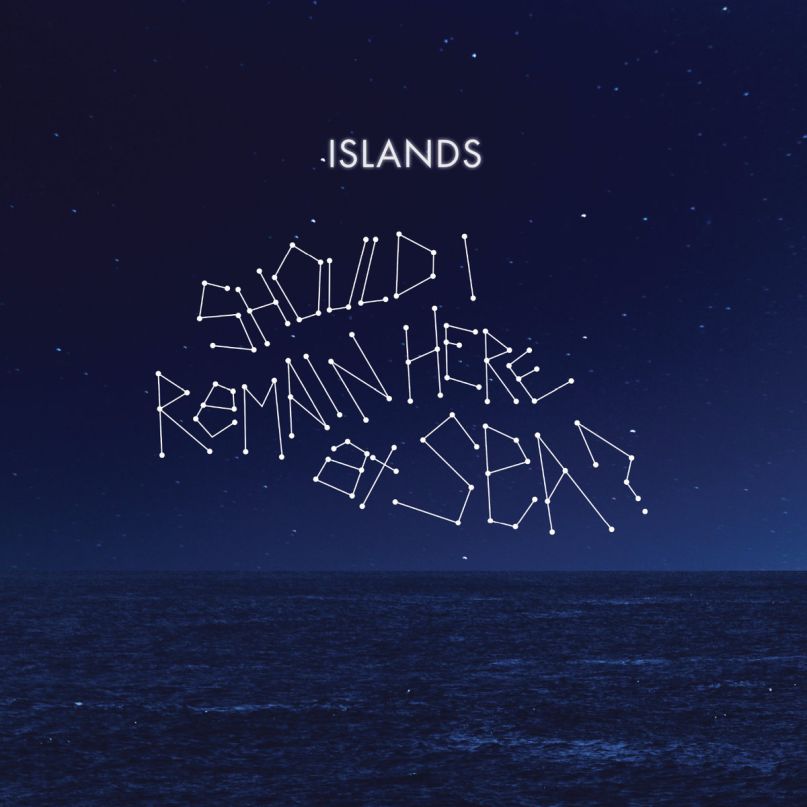 The risk of releasing two albums simultaneously, though declared from the get-go as separate entities, is massive. Many times the result feels bloated, an indulgent result of the artist’s unwillingness to edit, while other times one title overshadows the other in potency. None of these pitfalls have stopped Nick Thorburn, who as the main force behind Islands has created two albums that work on their own but together mend the fractured halves of a broken heart.

Taste, with its artwork of a woman’s lips, is the more mischievous of the two. Opener “Charm Offensive” sets the scene, as foreboding notes give way to a bubbly bass line and the bleat of synth horns. Electronic sounds wash over the record, from the space-age keyboards in “Pumpkin” to the purring percussion and flirty guitar line of “Snowflake”. Lyrically, Thorburn sings of the world’s woes, both microscopic and catastrophic, a break-up album in which the object of his disdain is the advent of the modern world.

The strongest thread running through the many sounds of Taste is Thorburn’s voice: a shot of whiskey in the hot cocoa sweetness of the record’s often upbeat tunes. On stand-out “Carried Away”, he affects a strained falsetto as he lays out a course for how to feel malaise. “So steal a little moment, lose it like you own it/ Know just what it’s all about, let it carry you away,” Thorburn sings as an emotive catharsis builds in the melody, a horizon of gray clouds heavy with the rains to come.

On Should I Remain Here at Sea?, things get decidedly more barren. These are guitar songs, numbers that channel the “record it live” feel of garage rock embellished with the flourishes of Islands’ musical toolkit. “Fear” is moody blues by way of Spoon, while “Fiction” is a short track that frames worried thoughts against warm surf guitar. On the slow and serene “Christmas Tree”, things are stripped down to just Thorburn’s voice and the bare strum of a guitar, and features lines of poignant ennui like “They said I’m shopping for a coffin/ I said, ‘Everyone get off of me.’”

When Thorburn joined forces with Man Man’s Honus Honus to create Mister Heavenly, they described their sound as “doom wop,” a clever chemistry of ’50s harmony pop and a mood of seething melancholy. The label fits on Taste and Should I Remain Here at Sea as well, two discs whose shared DNA comes in the form of Islands’ quirky approach to the pop structure. When it works, it’s a wonder.

On Taste’s “No Milk, No Sugar”, the inviting notes of a dance-friendly guitar line form a thin skin stretched across a skeleton of harrowing strings that eventually dissipate in a cascade of bright noise.  When it falls short, like on Should I Remain’s “Cool Intentions” — an anemic ballad in need of ballast — it does bring to mind that most lethal term: filler.

The good news is that the filler is minimal, relegated to a couple of tracks on Should I Remain and the triple false ending of Taste. The latter, which opts for a trio of ethereal-minded closers in “Umbrellas”, “The Weekend”, and “Whisper”, ends on somewhat of a whimper, a shame for a record that otherwise stands strong on the shoulders of Thorburn’s creative compositions and graveled croons.

Should I Remain falls much closer to earlier Islands’ efforts like their 2006 debut, Return to the Sea. Indeed, the band acknowledges this new record as a “spiritual sequel” to their first offering. This fact does nothing to assuage the feeling that it’s a slightly rehashed assemblage, a collection of tracks unworthy of Taste’s sound that were given a new hastily assembled roof over their heads. The rollicking campfire tale “Innocent Man” and lo-fi ditty “Back Into It” are pleasant enough, but fail when compared to their more realized, complex siblings on Taste.

“Sun Conure” may be Should I Remain’s highlight, strong harmonies set against an unhurried drum sample and a soft drawl of guitar. It calls back everything that has made Thorburn, from Islands, to the Unicorns, to his work composing the score for the Serial podcast, a forceful talent. To use the water metaphor so prevalent In his work, “Sun Conure” is still but deep.

“I don’t care for you/ I let you fly away/ Why are you still in the cage?” asks Thorburn, but he seems to know the answer. We may still be trying to figure it out, but with Taste and Should I Remain at Sea?, we’ve gotten a little closer.

Essential Tracks: “Carried Away”, “Sun Conure”, and “No Milk, No Sugar”