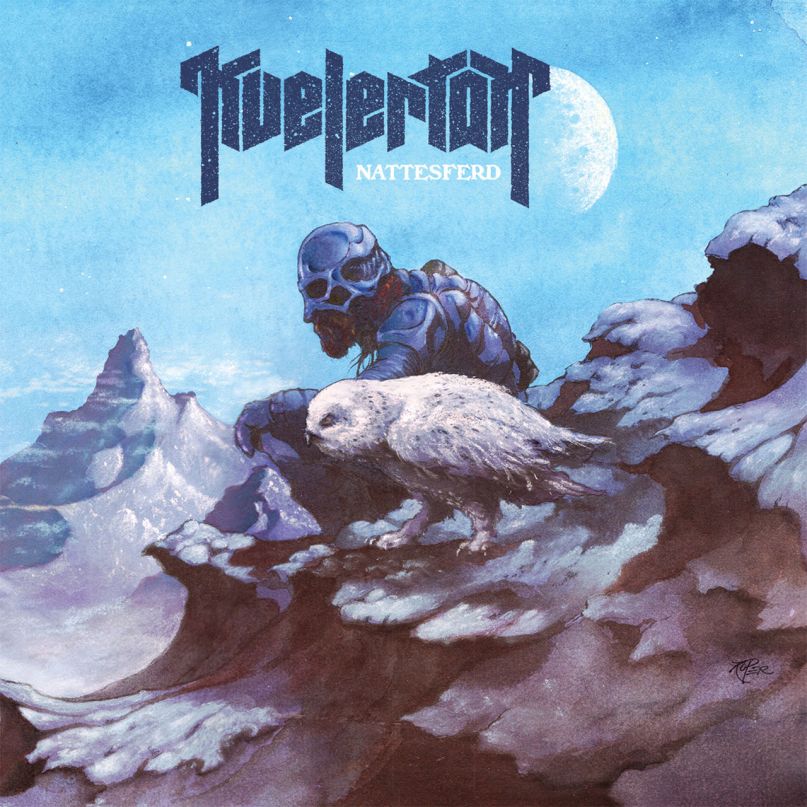 Any metal fanatic worth their salt keeps tabs on the vast and encompassing Metal Archives, a site which classifies and organizes almost all known metal bands, both active and inactive. That being said, I was surprised to find Norway’s Kvelertak hasn’t made the cut. I thought that the Scandinavian brand of headbanging hard rock these guys were playing was surely metal. Or at least they had come to fit within the parameters that I had assigned to heavy metal myself. And with a name that literally translates to “stranglehold,” wouldn’t most people categorize Kvelertak in the same way? Listen to their new album, Nattesferd, though, and it becomes clear that Kvelertak defy the very idea of categorization in favor of just playing some damn good rock ’n’ roll.

That being said, Nattesferd begins with a noticeably black metal-inspired tremolo riff. But before you can toss Kvelertak in with the Norwegian black metal scene, the band’s adroit trio of guitarists throw some brightness and technicolor into the melody. In an interview with Kill Your Stereo, vocalist Erlend Hjelvik boiled the band’s message down: “We’re all gonna die someday, so we might as well have fun on the way down.” And maybe that’s what prevents Kvelertak from being categorized with their present day contemporaries who deal in dark music and even darker themes: They like to have fun. Kvelertak clearly don’t fear that many of their songs would be considered catchy, even if they are dealing with some potentially philosophical or mythological themes lyrically. (All lyrics are in Norwegian, and faithful translations can be difficult to come by.) “1985”, for instance, begins with bright power chords à la ’80s Van Halen and favors catchiness and jamming over beating listeners over the head with nihilistic ideas and sorrowful contemplations.

Most impressively, Kvelertak are able to traverse across sub-genres and pull from dozens of influences within four minutes and still maintain purpose and direction confidently. The party rock in “1985” is immediately countered with the punk melodies, fuzzed solos, and Norse folk-tinged viciousness of “Nattesferd”. And no track proves the band’s ability to flex their heavy rock universality better than “Berserkr”. The song begins with thrashing tremolo picking and blast beats before progressing into Mötorhead riffs full of flanger. The track’s all over the place, and yet it remains captivating. It ends with a hardcore-style breakdown and Hjelvik raspy as all hell, a complete and definable departure from how the song began.

Nattesferd focuses on the journeying spirit of rock ’n’ roll. “Ondskapens Galakse” is adventurous, star-gazing, and spatial within its five-minute run. It feels a lot like the fantastic soundtrack for Guardians of the Galaxy, which placed ’60s and ’70s pop hits within the context and vastness of space and science-fiction, soundtracking the interactions of extraterrestrial species that would never know who Marvin Gaye might have been. Despite all the familiar/strange terrain, the music remains confident and comfortable and still makes sense. “Ondskapens Galakse” (which translates to “evil galaxy”) sounds like something terrestrial that’s bent somewhere out of this world.

Kverlertak expose their core on “Hekesbrann”, which at nine minutes is nearly twice as long as any other track on Nattesferd. The song takes its time to form, build momentum, and catch the attention of listeners. Ideas are allowed to expand and work through different shades. The track shifts perpetually, but like Hjelvik’s vocals, it’s confident and adaptable throughout any new environment. And after six years and three studio albums of developing their own identity, that furious refusal to fit into any one sound is about as metal as it gets.