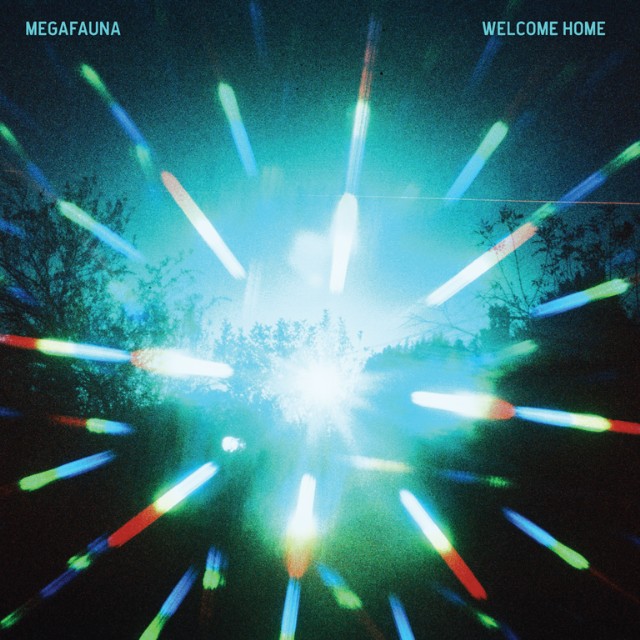 Megafauna refers to the massive animals that have thundered across the face of the earth, from elephants and rhinos all to mammoths and dinosaurs. It’s a fitting name for the Austin, TX, trio, who have been writing albums bursting with gargantuan riffs since their 2010 debut, Larger Than Human. Every two years since, the band has returned with a new record, further exploring the boundaries of their combination of psychedelia, proto-­metal, art rock, and blues. 2012’s Surreal Estate was often understated, with quiet, meditative moments dotting the landscape of crushing guitars, while 2014’s Maximalist was an unrelenting pummeling from some of the band’s heaviest songs to date. Now, on their fourth record, Welcome Home, Megafauna find themselves once again in that more intimate space, experimenting with sparse, spacey guitars and synths under frontwoman Dani Neff’s gorgeous, airy voice.

The album is still full of ass­kickers like “Doubt”, which shudders forward like a train gone off the rails, and “Hogs Out” with its steel-­toed stutter ­step in 10/4 time. But this time around, they’re cut with warbling psych ­pop reminiscent of Lilys or Jim Noir. The mid­-album “Interlude” is a bubbling bit of acid pop with its wavering, tremolo-­twinged synth melody, while “Don’t Ask Questions” would feel at home on a Lush record until it explodes into a wall of overdriven guitar. Moments like that hammering twist suggest a shortcoming in the band’s moniker: sauropods weren’t exactly known for their agility, while the way Megafauna hurtles through transitions laced with off­-kilter grooves and angular riffs is light­-footed and athletic. Think less Black Sabbath and more Deerhoof, not so much stoner rock as stoner rock’s brainy, well-­read cousin.

From the rumbling war drums of “Panpsychist” to the dreamy shoegaze of “It’s So Simple”, the band lunges and lurches with deft precision. The weaker moments come when they flirt with the cheesier aspects of their sound, like the Stevie Ray Vaughn-­ish intro to “Gaia” or the dance groove bass line of “Keep Learning the Same Thing”. Even still, Megafauna manage to weave these sounds into strange, new structures, deconstructing chord progressions and pulling apart grooves to examine what makes them tick. Credit for holding things together is due to the clockwork rhythm section of drummer Zack Humphrey and bassists Will Krause and Bryan Wright, but it’s Neff’s sublime axe-slinging that steals the show. She constantly changes gears as she rips through huge solos only to dive back down into warm pools of reverb and delay before building back up into bizarro arena rock riffage once more.

Those startling change­-ups make the trio so special, refusing to fall into the obvious riffs and tired song structures of similar heavy bands. And they do so with remarkable consistency, not just in the quality of the songs but the tone of them as well. A collection of songs as wide-­ranging as Welcome Home can fail in its ambition, but with Neff’s striking Björk-ian voice uniting everything, most of the angles come together.

There are some odd choices here and there, as you’d expect with a band pushing against the boundaries of their sound. “Keep Learning the Same Thing” is probably the album’s weakest track, while the eight­-minute-­long title tracks meanders about a bit too much in prog atmosphere to give it any punch. Strangest of all is the overwhelming compression on the drums, making them sound like they’ve been recorded in the vacuum of space. For an album so clearly focused on tone, dynamic, and presence in all other aspects, the drums have virtually no room sound at all, making them seem lifeless and weak despite Humphrey’s obvious skill.

With its wild turns, halcyon harmonies, and roaring guitars, Welcome Home is Megafauna’s most ambitious and imaginative record to date, like St. Vincent for people who love the Melvins. It’s also their best. As fantastic as Maximalist was with its hammerheaded riffing, the darkly expansive experimentation of Welcome Home takes the crown for sheer originality and scope. It may be just a little bit too weird to be truly perfect, but this is some goosebump-­raising, eye­-watering psychedelic rock and roll.