PUP – The Dream Is Over

On their sophomore effort, the Toronto punks are a ball of anger slowly gravitating toward something bigger 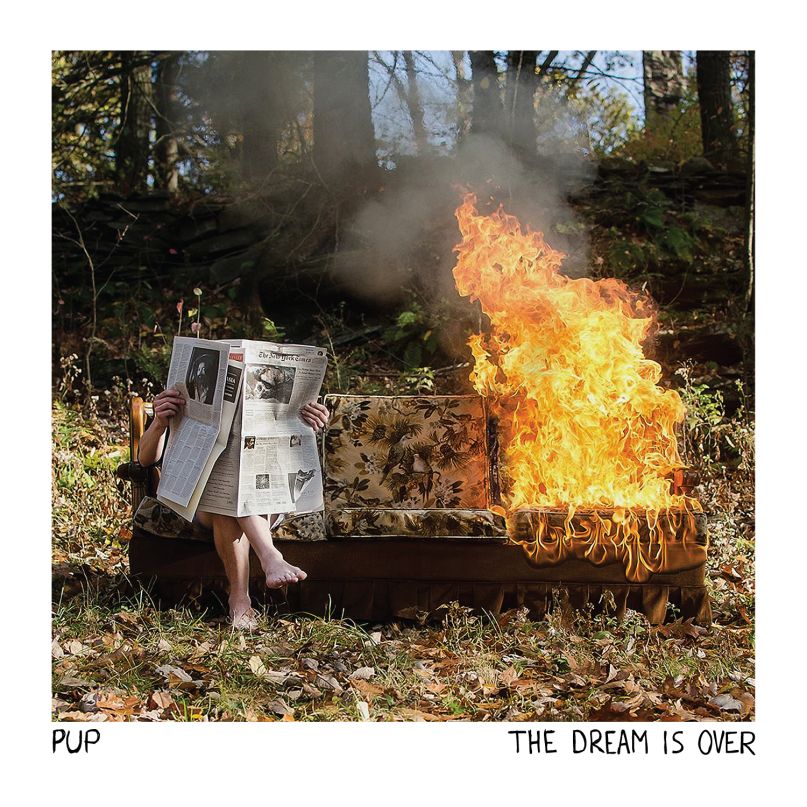 The music video for “Reservoir”, the lead single off PUP’s self-titled 2014 debut, begins as a sweaty punk show and ends up a horror movie. Broken bass strings slash across faces, shattered cymbals slice their way into flesh, and blood splatters across the floor of the venue. The whole scene is a jarring affront to the “safe spaces” policy that has become so prevalent in the punk scene in the last few years. Though they’re having a bit of fun with it, PUP’s idea of punk is a space that welcomes everyone but isn’t safe for anyone, least of all themselves.

To this Toronto quarter, “Live Fast, Die Young” isn’t so much an ethos as it is a challenge. They accept it with a kind of religious zeal, throwing their bodies around like rag dolls on stage, entering themselves in lopsided demolition derbies, and, in the case of vocalist/guitarist Stefan Babcock, literally shredding his vocal chords (the title of the band’s new LP, The Dream Is Over, is what his doctor said after inspecting his throat). When Babcock ignores the doctor’s orders on the album’s opening track and screams, “Every goddamn syllable that you say/ Makes me want to gouge my eyes out with a power drill,” it’s not entirely clear that he’s using figurative language.

All punk music is visceral in the sense that it appeals just as much to the id as to the intellect. Sure, it may occasionally deal with heady concepts and the enemies it targets often exist in the realm of the abstract, but one thing that can be said about nearly all punk music is that it demands the listener to be physically present. PUP take this quality to its logical extreme, calling attention to the body at its breaking point.

With its gritted teeth and threats of violence, “If This Tour Doesn’t Kill You I Will” sets the tone for the rest of The Dream Is Over, a feral animal of an album that frequently lashes out without warning. Lyrically, the song traces a band’s deteriorating relationship as they transition from friends to mortal foes, confined in a claustrophobic van for days, weeks, and months on end. The first 30 seconds or so find Babcock alone with his guitar, alienated from the rest of the group as if he’s seething in the corner of a club before soundcheck. But then something unexpected happens: The rest of the band kicks in, the lights go up, and this ballad of the disenchanted becomes a twisted kind of anthem — and anthems, of course, only work when you have friends to play and sing along with.

The Dream Is Over embraces this contradiction to its fullest extent, feeding off the frustrations of the individual while gathering its raw power from the group. Oftentimes Babcock’s lyrics paint a picture of his own private hell, an interior landscape dominated by self-hatred and regret. “You know I’ve never been good at anything/ Except for fucking up and ruining everything,” he screams on hardcore ripper “Old Wounds”, the album’s aggro centerpiece. Elsewhere, he laments a relationship gone south (“She says that I drink too much/ Fucked up and she hates my guts!”) and expresses a desire to call it quits on social interaction (“It feels like I can’t win/ I couldn’t wait to be alone again”).

The irony at the core of PUP is that Babcock never really is alone. Even his most cynical, embittered lyrics are accompanied by a drunken choir of gang vocals, making them sound more like rowdy bar sing-alongs than missives from the abyss. Every “Woooooooh!” that stands in for a chorus is a shout of tacit support, and a reminder that loud music can’t ever really be about loneliness, because you can’t make all that noise without the help of a few sympathetic friends.

It makes sense, then, that so many of the songs on The Dream Is Over come across as positively euphoric, even when their subject matter lands squarely in the mind’s gutter. “DVP” might be the best party punk song to come along this year, while “Can’t Win” layers seesawing guitar riffs under a shout-along chorus to induce the maximum feeling of togetherness. Never has it been more fun to spend time with a bunch of twentysomethings who can’t stop complaining about getting drunk and stoned all the time.

For the most part, The Dream Is Over doesn’t advance the agenda PUP laid out on their self-titled, though it does hone it to a sharper point. If there’s any sign here that PUP is growing up and maybe — just maybe — slowing down, it lies in a pair of songs that shine a starkly confessional light on the band’s Canadian origins. With its imagery of dead bodies floating beneath icy lakes, “The Coast” seems to acknowledge that certain things are out of one’s control (“No one can seem to accept the fact/ The lake gives us life and she takes it back”).

“Pine Point” also deals with the inevitability of death and decay in a small Canadian town, though it suggests that life doesn’t have to be a lonely wasteland. “I kept my eye on the prize, and it was you,” Babcock sings, finally stepping outside himself. Coming at the very end of the album, it’s the moment that showcases PUP in their truest form — a ball of anger, slowly gravitating toward something bigger.