On their ninth studio album, Thom Yorke and co. release old favorites under a somber light 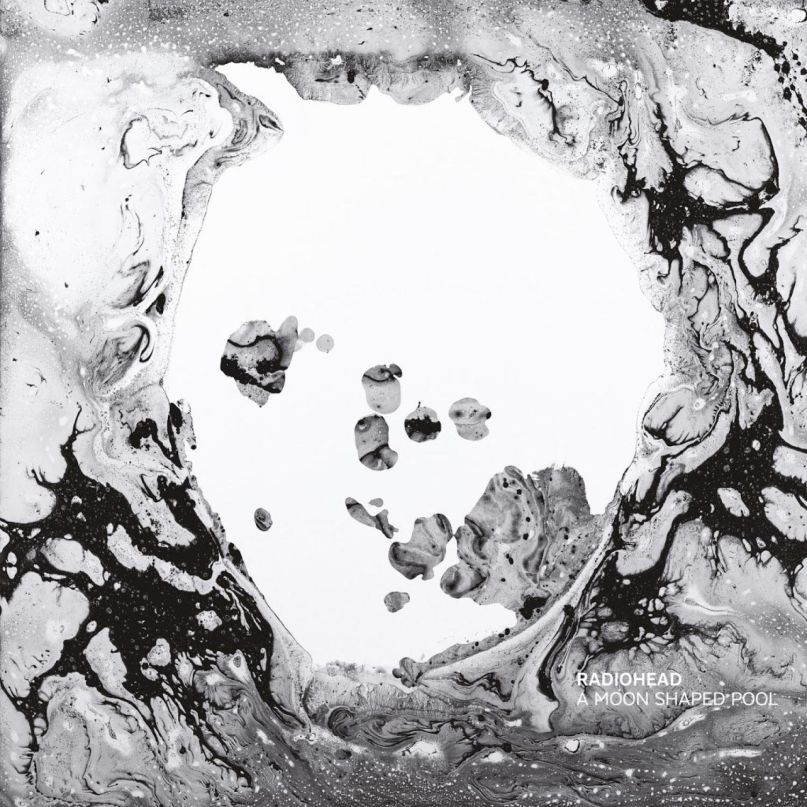 Of all the potential titles circulated during the wait for Radiohead’s ninth album — Dawn Chorus, Burn the Witch, Silent Spring — A Moon Shaped Pool comes as a petty disappointment. It reads like a typical Thom Yorke tweet about global warming and how rising sea levels will turn our planet into an amorphous blob of water held together by gravity. Other readings exist, be it nature repelling corporate oil (a literal take on Stanley Donwood’s album artwork) or heartbreak instigating musical inspiration (a literal take on the “Identikit” verse it appears in). But they feel cheap, too. It’s less straightforward than past titles, but given the album plays out like the band is floating on calm seas, trembling at the endless stretch of black nothingness above but taking deep breaths to stay calm, the name feels like an adequate understatement.

There’s no sonic reinvention on A Moon Shaped Pool, nor is there a rally against a monolithic issue. Erasing their social media accounts wiped clean the slate. That much is clear: Radiohead’s commitment to concept ended. There are instances of those big ideas, of course, but they don’t shape the image as a whole. And yet, what the band offers on A Moon Shaped Pool is equally affecting: an acceptance of time’s power. Rather than confronting something looming in the future or nipping at our heels today, they address an issue that’s worn us out for years, causes anxiety in the now, and, as if to mock us, repeats itself on the regular. “This is a low-flying panic attack,” Yorke sings on opener “Burn the Witch”, while Colin Greenwood’s bass sneaks about, Philip Selway rocks a modest drum pattern, and Jonny Greenwood’s recent scoring experience blossoms with help from the London Contemporary Orchestra. It’s a look at the way time frustrates our repeated attempts at change. Whether in politics, relationships, or personal life, time drains — and it doesn’t take long for that to result in mental exhaustion.

(Ranking: Every Radiohead Song From Worst to Best)

But then they focus on the act of watching change occur. Radiohead react with unusual tranquility, as if embodying the crying minotaur on Amnesiac’s cover along with the album’s musical themes. When life begins to speed up this time, they don’t try to catch it, but rather watch it from bleacher seats. There’s a dour acceptance of that on the electronic sigh of “Tinker Tailor Soldier Sailor Rich Man Poor Man Beggar Man Thief”, especially in its closing strings. When they do try to outrun it on “Ful Stop”, Radiohead spark with energy from a menacing bass line, complete with Selway and Portisthead’s Clive Deamer hammering away on drums. But even that feels like a mental chase rather than a physical one. Others like “Decks Dark” and “The Numbers” (previously “Silent Spring”) lose their way in dampened atmosphere. Somber tones have never been absent from their music, but that one track of refuge — think “Give Up the Ghost”, “Videotape”, “I Will”, “Pyramid Song”, “How to Disappear Completely”, “Street Spirit (Fade Out)”, “Let Down”, “Lurgee” — expands into 11 here. It’s an act of selfishness, drawing slower and softer.

After 30 years as a band, it’s about time their music benefited themselves. Intricate melodies and grooves replace the band’s usual hooks. Those subtleties could easily be misread as vacuities. For one, the alphabetical tracklist reeks of laziness, of defeat, but its sleek transitions prove it was engineered in a precise order, building towards an experience in line with Kid A. Partially recorded in the south of France, A Moon Shaped Pool captures an odd form of contentedness combined with the rambling structure of Jim O’Rourke or Cul De Sac, but without reliving the uneasy neurosis of their rock-heavy days. It’s not so much that Radiohead built up a resistance to anxiety, but rather that they’ve come to terms with anxiety’s role as a necessary evil, and that no number of months or years will ever slow its roll.

(Read: Why Radiohead Is the Only Rock Band to Perfect the Surprise Album Release)

In 2015, Yorke and his partner of 23 years, Rachel Owen, separated. While by no means an autobiography, the album does act as refuge for the songwriter. Its shortest number, “Glass Eyes”, follows an alienated character who fears civilization as he feels “this love turn cold.” On “Present Tense”, he watches his world crumble, singing, “I won’t slack off/ Or all this love will be in vain,” in an impossibly cool voice. But it’s with “Daydreaming” and its accompanying video that he narrates the damage done. Piano trudges through a swamp of haunting strings, glistening guitar notes, and spacious synth until Yorke’s exhausted, deadpan repeating of “Half of my life” is backmasked, violins splintering from its side.

In some ways, A Moon Shaped Pool plays like a Thom Yorke solo album for that reason, akin to a Tomorrow’s Modern Boxes successor, with personalized invitations mailed to both Greenwoods: “Jonny, I was hoping you could pen some of those monstrous There Will Be Blood strings here. And, Colin, perhaps some lines too subdued for the spotlight that are still rather thick? What do you say? xxx.” But there’s communal pain in Yorke’s words, in everyone’s playing. When he uses an acoustic guitar on “Desert Island Disk” for pastoral finger-plucking, it could easily stop there as rework of live solo material, but whirring electronic waves and light drumming turn it into Radiohead’s version of full-blown English countryside folk, their own “Hazey Jane I”. Perhaps they realized Yorke’s pain could speak for the band as a whole. That’s not necessarily true in a literal sense — the rest are still happily wedded and working — but in that detached emotion universalizes itself when time modifies love, youth, and fear with impossible speed.

(Ranking: Every Radiohead Album From Worst to Best)

Waiting five years to hear previously released tracks is worth it precisely because Radiohead finally feels connected enough to perform them with meaning. The lyrics and imagery of “Burn the Witch” dotted the internet for over 15 years, but the darkness of Jonny Greenwood’s strings never could have been predicted. “Present Tense” was performed live in 2009 as a sparse number, but here its bossa nova rhythm expands into a rich pool of echoes and romantic choir notes. Live versions of “Identikit” stuttered through the motions of a wringed The King of Limbs session, but the studio version wiggles out of that shell, complete with a groove breakdown and dream-like backing vocals. Radiohead actively chose to rework these old songs at this point in time for this specific album.

Nothing proves this more than “True Love Waits”, a song first performed in 1995 and recorded live in 2001 on acoustic guitar. It guts the listener with harrowing sincerity. Yorke transferred the music to piano, minimalist despite overdubbing chords, its notes pressed so gently that the creaks of each key’s mallet can be heard. What was once a song of intimacy and surviving on lollipops and crisps now becomes melancholy, begging not to be abandoned. Over nearly five minutes, the refrain (“Don’t leave”) transforms from promise to instruction to plea. Yorke utters the latter without expecting an answer, and the last piano chord rings out until silence swallows it whole but refuses to offer Yorke that same easy exit. Instead, both he and the listener have to rise from the piano stool and re-realize that, more often than not, no one else is there in the room. At the very least, waiting to release a studio recording of a song over two decades old allowed Radiohead to peel its words when riper than ever.

My first listen to A Moon Shaped Pool was on a commuter rail train in a seat facing backwards. It’s strange to experience vivid emotions — even those of someone else through song — while making eye contact with dozens of strangers staring straight through you, but it became optimal. A Moon Shaped Pool should be heard when watching time pass before you, when realizing the terror in accepting that a big, red button with “STOP” stretched across it doesn’t exist. The band knows this, but only now does it seem to sting with truth. Only now does it seem like Radiohead, a group too big to break up, could call it quits after pouring everything into their music, ending with a record of personal exhaust examined through leisurely means. The last five years humanized Radiohead in a way unheard on previous records. To process something of that weight, excess time is needed — and we can’t rush that. At least that’s one of the few pleasures time guarantees in years to come.