Pop stars' return is better than it needed to be, full of real heart and energy 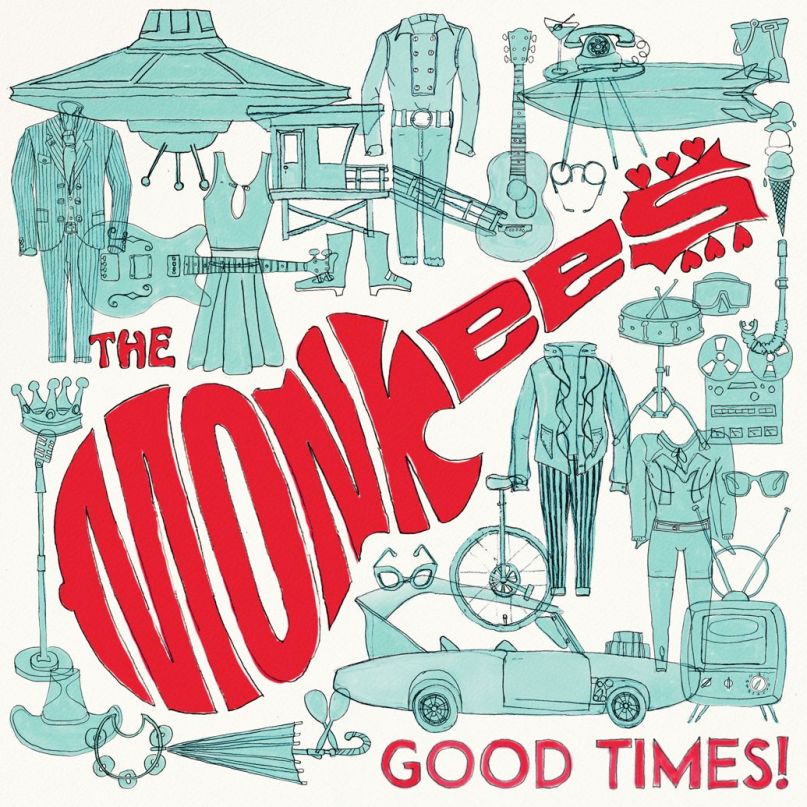 The central conceit of Good Times!, the first album in 20 years by ‘60s pop icons The Monkees, is not a new one. Match an artist in the autumn of life with a much-younger producer/songwriter who is an unabashed fan of the veteran’s older work and a goal of splitting the difference between the sounds of the past and present. It worked so well for Loretta Lynn/Jack White, Johnny Cash/Rick Rubin, and Mavis Staples/Jeff Tweedy, that it’s bound to work for Micky Dolenz, Mike Nesmith, and Peter Tork as they hit the studio with Adam Schlesinger, right?

On this count, Good Times! succeeds handily. The Fountains of Wayne multi-instrumentalist and The Monkees ably right the wrongs of the band’s previous reunion albums (1987’s Pool It and 1996’s Justus) by almost entirely ignoring the sound of modern pop and rock. Instead, they charmingly approximate the feel of the group’s 1967 heyday, when they released three #1 albums that were a delightful mishmash of styles and sounds, aided by some of the era’s best songsmiths. Good Times! sounds as buffed and polished as a digital recording often does, and the Monkees sound their age (all three are in their early 70s), but otherwise the mood of the album sits nicely alongside the band’s vintage classics like Headquarters and The Birds, The Bees & The Monkees.

At first blush, the album is an exercise in seeing how well the modern songwriters could do in bringing The Monkees’ creative peak back to life. All of them come fairly close but understandably can’t get past themselves in the process. Every song bears the obvious marks of these support players’ day jobs.

The best of the bunch, Andy Partridge’s “You Bring the Summer”, winds around the guitar jangle and ebullient wordplay of XTC’s 1992 album Nonsuch. Similarly, the gently folksy “Me & Magdalena”, written by Ben Gibbard, would slot nicely into the tracklist of his 2012 solo release Former Lives. “Birth of an Accidental Hipster” carries the psychedelic/glam spirit of a late period Oasis B-side thanks to co-writers Noel Gallagher and Paul Weller, and is elevated here by a lively arrangement and a spirited vocal turn by Nesmith. And “She Makes Me Laugh” is the kind of spritely power pop that Rivers Cuomo seems to be able to write in his sleep. It also boasts the kind of earworm, singalong chorus that has keep Weezer in the popular consciousness for 20+ years.

Not even Schlesinger could avoid this. Even as he melds together the essences of “Daydream Believer” and “You Told Me” on the bouncy “Our Own World”, it still comes out like a Fountains of Wayne outtake. But give The Monkees a lot of credit for their willingness to move with the tide of Schlesinger and Rhino Records’ vision for this album and sounding like they’re enjoying themselves as they do.

The album also allows the individual Monkees to show off their songwriting acumen in small doses. Surprisingly, those are the songs that take on the most emotional resonance upon deeper dives into the album. In particular, Tork’s spotlight “Little Girl” is a sparkling, shuffling little gem. The perfectly executed love song is burnished with the bitter truth of time’s forward momentum: “Come away, take my hand/ Leave your castles in the sand/ We cannot save them from the sea.” Nesmith, the Monkee who had the most successful solo career, plays to his marked strengths with a piano-driven ballad with a softly spiritual bent.

In both cases, we see these Monkees acting their ages on record. Dolenz, though, has never seemed too comfortable doing that. He’s been the one who has strenuously tried to either catch up with the times (quaint as Justus was, it also features some particularly painful attempts at modern rock) or stay planted in the past (his most recent solo albums have largely stuck to covers of Broadway tunes or hits from other ‘60s popsters like The Beatles and The Archies).

That’s likely why he sounds so lively here. With a producer that actively wants to recreate a classic Monkees vibe, Dolenz dives right in. That enthusiasm helps bring to life all the songs where he is placed at center stage. The Harry Nilsson-written title track or the wonderful Jeff Barry/Joey Levine garage pop of “Gotta Give It Time” allow him to break out that little growl that we heard on “Words” and “Randy Scouse Git”. The rest of the album is aided by his chirpy croon that has stayed remarkably strong despite his age.

For what was essentially created to promote the group’s upcoming tour and the Blu-ray box set featuring (among other treats) all the episodes of their TV show and their delightfully bizarre feature film Head, Good Times! is better than it needed to be. Unlike the tossed off albums by most legacy acts, there’s real heart and energy to this, not to mention some rather great tunes. But what it likely won’t do is connect The Monkees with a modern audience.

While their legacy has been rescued by their more famous fans and a cadre of critics, The Monkees are still looked at with derision by many ‘60s cultural historians. The essence of the band as being a gang of puppets cobbled together by TV execs desperate to cash in on the success of The Beatles is something that has kept them from reaching the heights of their contemporaries. You’re not going to see The Monkees added to the bill of the Desert Trip Festival any time soon. Knowing that, though, we can at least appreciate what Schlesinger helped The Monkees accomplish here: reaching one last high note before their last ride into the sunset.

Essential Tracks: “You Bring The Summer,” “Little Girl,” “Gotta Give It Time”