Thrice – To Be Everywhere Is To Be Nowhere 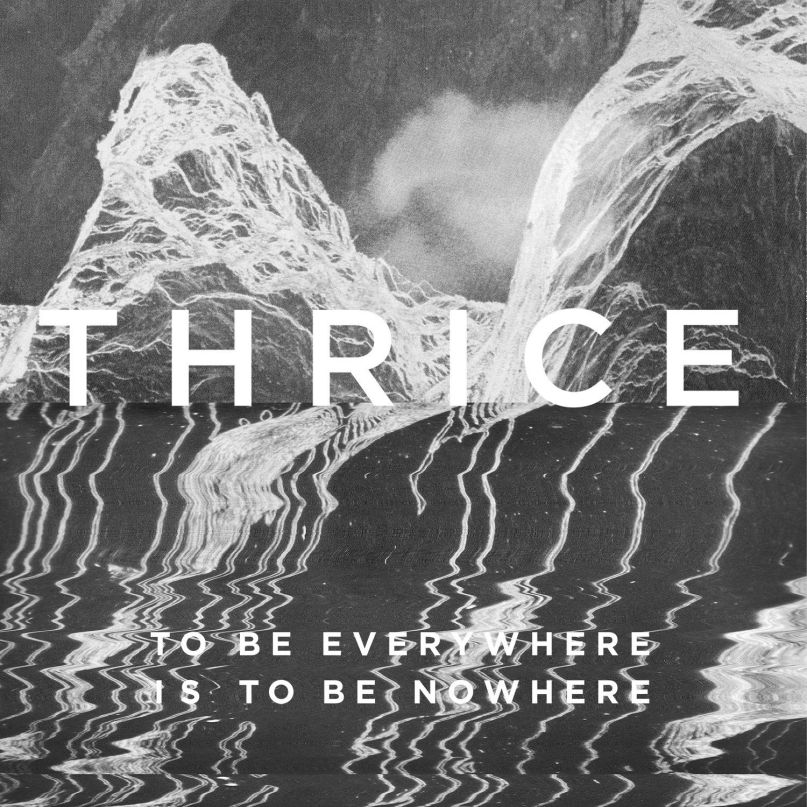 Many hardcore Thrice fans have been bitching about the band changing their sound ever since Teppei Teranishi scaled back and slowed down his guitar solos on 2005’s Vheissu. That’s not to say that most of their audience hasn’t come around — latter-day works like Major/Minor and especiallyThe Alchemy Index are viewed in a positive light — but there will always be dissenters whose musical values boil down to “Faster! Louder!”

Generally, I don’t agree with that type of complaint. Bands are free to do whatever the hell they want, and a refusal to sever one’s roots can lead to diminishing returns. But for the first time on any of Thrice’s post-Artist In the Ambulance releases, I’m siding with the naysayers. It’s not because I think they’re a band who’s only good when they’re fast and loud. But they are a band who’s good when tethered to complexity, whether through an album’s concept, its elaborately technical musicianship, or both. Vheissu may not have had the snarl or speed-freak time signatures of The Illusion of Safety, but it more than made up for that with its epic scope and genre experimentation.

But their ninth album, To Be Everywhere Is To Be Nowhere, has neither the charge nor the depth of anything that came before it. Thematically, it’s political in the most halfhearted sense, with frontman Dustin Kensrue railing against forces like government oppression, war, and breaches of privacy throughout. But his criticisms and character sketches are too general to become suitable rallying cries. “Whistleblower” — told from the POV of Edward Snowden — actually does a disservice to its subject, the cliched sloganeering (“Who made you judge and jury?”) making its narrator sound more like a pissed-off high-schooler than someone who leaked some of the NSA’s most classified information to the public. “Wake Up” suffers the same fate by never defining whatever ominous force Kensrue is wailing about, instead latching onto passé imagery of foxes stalking a garden to convey dread. He doesn’t fare much better with hope either: “I believe there’s a way through the fire/ I believe there’s a joy that blooms beyond these walls,” reads “The Long Defeat”.

But no musician lives or dies by their words alone. Plenty of artists can make up for tired phrases in their musicality. Thrice even did it themselves on Identity Crisis, elevating the largely overdramatic lyrics through loud/soft contrast and brain-rattling thrash. To Be Everywhere has no such energy, relegated to medium pacing and chord progressions that usually find the bass and guitars linked together in a monotonous crunch.

The few successful songs manage to offset the words with ear-twitching dynamics. Lyrically, the antiwar anthem “Blood On the Sand” is about as artful and subtle as the title suggests, but its raspy interludes and the range of Kensrue’s voice — moving from croaking to clean singing to his early-career scream — give it considerable power. “Black Honey” achieves a similar effect by using a muffled guitar line as its anchor, as if the recording’s being fed through a military walkie-talkie. It’s also the sole song where Kensrue manages to be unconventional in his metaphor, dreaming up an unsettling vision of someone swatting their way into a beehive to get to what’s inside. The airstrike of stings, along with the confusion over why the bees are attacking him in the first place, paint a nightmarish picture no matter how you interpret its meaning; no matter how much of a departure it is from their older sound. That kind of power, imaginative, lyrical, or musical, though, is all too rare on the album.