Twin Peaks – Down in Heaven

While striving for maturity, the Chicago youngsters lose a lot of their raw energy 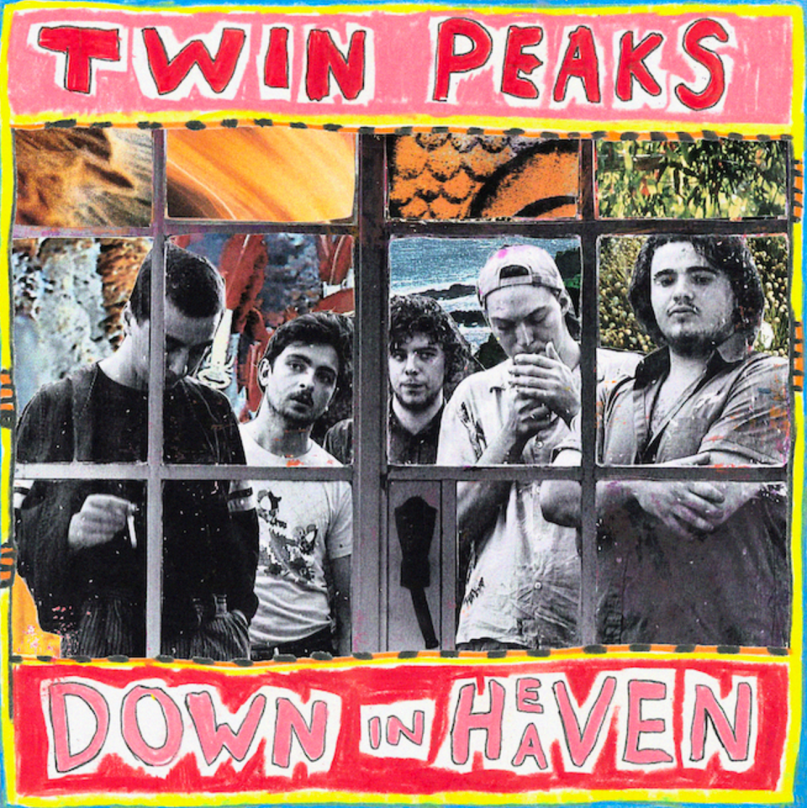 Twin Peaks are the kind of band everyone wishes they started in high school. The group spent their teen years channeling all that energy and angst into a rowdy debut, and soon caught the attention of critics and punk peers. As a live act, they were equally spirited, and soon tours with major groups and high-profile festival dates followed — all before the memories of lockers and geometry homework even had time to fade. They had amassed a career’s worth of success before their second album was even on the horizon.

While the members are still young, the band is now getting up in years, and on Down in Heaven they aim to demonstrate they are not merely older, but also wiser. Their second release, 2014’s Wild Onion pointed to this new maturity with its larger scale and production. While their debut was short and punchy, they came back with a bigger and more thoughtful album, proving they have the stamina for longer work, and therefore a longer career. On this latest release, they look to further explore a newfound adulthood with more ambitious songwriting, a growth that is more internal. For better or worse, the group digs more seriously into new influences and styles, hoping to evolve their sound.

The result is an all-around calmer release. Gone is the crashing waterfall of guitar noise and guttural singing that characterized their debut. Cadien Lake James can truly sing; that’s been clear since early singles, and this release seems to want those vocals more front and center. Yet this comes at the cost of some of the unbridled instrumentation, a loss that Twin Peaks grappled with on Wild Onion as well. This new sense of equilibrium doesn’t benefit the band when it comes at the cost of their heart, and the biggest challenge for the group seems to be moving forward while maintaining some of the firecracker spirit of their debut.

This album veers even further away from punk, looking for a sound that is more melodic by taking on a whole slew of new influences. The subtle wrinkles of slide guitar and keyboards definitely add new texture as well. Even the pacing and tone are new; “Heavenly Showers” is a rare full-acoustic jam. Slowly, the group seems to be cracking open the door beyond power chords and antics. The whole record seems to switch back and forth between breezy rock and slower ballad-y songs, but it never reaches the kind of chaos that the group originally cut their teeth on. This departure is responsible planning for their future, but it is also proves to be a bit dull. Twin Peaks get lost on songs like “My Boys” and “Keep it Together”, where they seem to lack enthusiasm for the new sounds they are trying on.

One development that does help is the intelligent use of vocals. The versatility of the group’s four voices peaks on this record, as it shifts between Lou Reed monotone, melodic bridges, and low bass growling. The harmonies, including the punctuation of Clay Frankel’s rougher background vocals, are also used cleverly as the band tries to capture something more vintage. This works particularly well on the first half of the album, with opening tracks “Walk to the One You Love” and “Wanted You”. The call-and-response harmonies are especially satisfying, some of the strongest moments of the record.

The road to adulthood is full of highs and lows, and it’s unlikely that a band so young will find perfection on every release. Sometimes, their search for maturity undermines the raw strength that came from their amateur days. Many of these tracks certainly evoke something older, plucked straight from a dad’s record collection, but Down in Heaven carries some of that mustiness. The record ends up being too careful, even occasionally uninspired. Yet Twin Peaks seem to know where they are going, and will continue to find the right way to walk that tightrope between youthfulness and maturity.

Essential Tracks: “Walk to the One You Love”, “Wanted You”

–An early draft of this review incorrectly credited which band member performed lead vocals on multiple tracks. We apologize for the error.