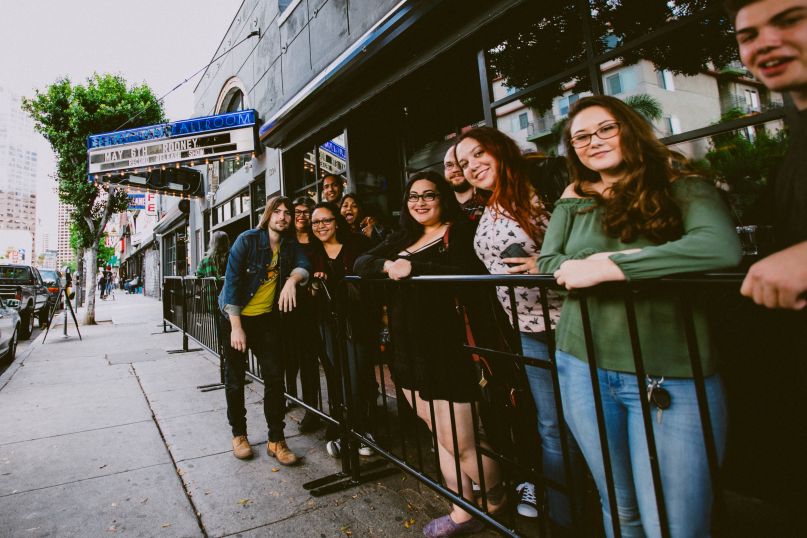 “I’m about to see this band Rooney,” I say to my inquiring Uber driver. “I’ve loved them since high school, so I’m really nervous.”

“Oh, they’re from the UK, right?” he responds, going on and on about how much he loves them, too.

He’s wrong, but I don’t bother correcting him because we’re almost at the Teragram Ballroom, near Downtown Los Angeles. And I wasn’t lying; I was very nervous. It’s always a little nerve-racking meeting the object of decades of adoration. No one can possibly live up to the standards set inside the mind of a rabid fan.

Rooney entered my consciousness in the early 2000’s with the super-catchy “I’m Shakin'”. I remember my infatuation with the band was mostly due to Robert Schwartzman’s voice. I could never listen to a band for too long no matter how great everything else is if the vocals are weak. Robert is a damn good singer. I knew it then as a teenager, and I am so sure about it now as I listen to him rehearse backstage.

It’s not the proper way to do things, but a good way of predicting how nice a person is going to be is going off how nice the people around him are. So when I meet Hunter, Robert’s tour manager, my nerves calm down a bit. It’s a crazy night for the band. Apart from the show being sold out, their guest list is already at its highest capacity, and many last minute requests from friends and industry people are still pouring in. Not wanting to disappoint, Robert and Hunter personally check on who’s actually coming or not, a kind effort to accommodate as many people as possible.

Elsewhere in the room, band mates are going over the set list, stringing their guitars, and hanging out with their girlfriends. Occasionally, friends come in to say hi and then bye. One particular group of very attractive women catches the eyes of everyone outside backstage. They leave after a minute or so.

There’s still more than an hour left before doors open, and I tell Robert that there’s already a long line of fans waiting outside. “Want to go outside to the front?” he asks, quickly answering his own question. “Yeah, let’s go say hi.”

He waves to the early birds, and I take a couple of photos of him with them. Then, one by one, fans start approaching him for selfies. Eventually, he says hi to each person in line to make sure they get their photo.

Working in this industry gives me the opportunity to meet all kinds of people, many of them incredibly famous. I have this theory that people who have been famous their whole lives ultimately end up being the most grounded. Or, at least they are great at seeming so. Perhaps it’s because they’ve had all this time to sort through the craziness.

On the other hand, this isn’t an entirely fair assessment. Bands who catapult into fame after being obscure for a while, playing to sparse crowds, aren’t always equipped to deal with what fame can throw at them. If you’re new to the business, you open yourself up to new situations. This industry is cruel to mental and emotional weakness. Social anxiety? Pre-show nerves? None of it matters. To them, you’re just being a bitch and that’s that. It’s hard to keep in mind that our favorite artists owe us nothing because we always want everything from them and more.

Anyway, what I’m trying to say is, based on the couple hours I spent around him, Robert Schwartzman seems like an incredibly well-adjusted, all-around nice guy, and even the people around him acknowledge that. He makes little to no fuss backstage, and for someone about to play a sold-out record release show, he is chill as can be.

He has every reason to be. Washed Away just came out and it’s already on iTunes’ Top 100. The venue is packed tonight, and everyone is excited. It’s a great night in California and Rooney are back.

Listen to Washed Away on Apple Music.

Listen to Washed Away on Spotify.