An Adult’s Guide to Young Thug

Hey kids, be sure to make your parents read this list 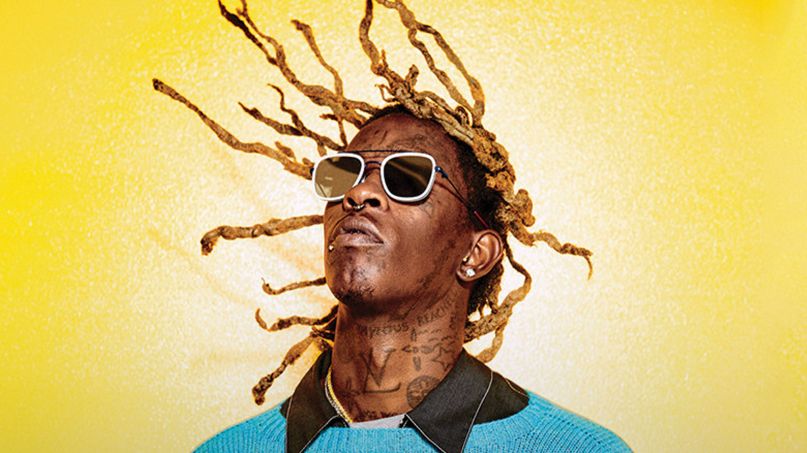 Once upon a time, the Wu Tang Clan was for the children. Those children have grown and are now paying mortgages, visiting farmers’ markets, and watching Showtime’s The Affair. As hip-hop has aged, early fans of the art form have aged with it, and some have become staunchly set in their ways, discrediting any contemporary rap that doesn’t pay homage to or sound exactly like the golden age of the genre (the 90’s). This is a dangerous game to play and one that aligns the old-school mentality with that of old rock ‘n’ rollers who are yelling at the clouds because they don’t like what’s popular (read: unfamiliar) now. The greatest example of this type of lightning rod in hip-hop today is Atlanta rap wunderkind Young Thug.

Young Thug’s voice is a vessel of human expression, akin to Da Vinci’s paintbrush, Hendrix’s guitar, or The Rock’s eyebrow. To attempt to corral it within the realm of socially acceptable culture is a fool’s errand. His point of view and lyrical stylings are like nothing we’ve seen before — a hedonist with the oral skills of a caffeinated auctioneer. These attributes are mostly lost on older generations of rap fans, though, with Young Thug falling into the category of things only young people seem to understand, like Snapchat or proper emoji use. In 2016, Young Thug is for the children, but he doesn’t have to be just for them. Assembled before you is a guide to eight Young Thug songs that can serve as a jumping-off point for any adults looking for a way in, a pu pu platter if you will. Kids, show your parents. Confused parents, recall that you let Frank Zappa happen, and listen up.

“Danny Glover” is possibly the greatest example Young Thug has given us of his unorthodox work ethic, seeing as the song is one of his most popular and memorable tracks and that it took all of eight minutes to craft. A brash run-through of the many ways in which he’s stunting (“I just bought a Bentley, and a bitch came with it”), “Danny Glover” is such an overwhelmingly confident track from an artist who was relatively new to the game. It may not be evident on first listen, but this song posits Young Thug as a new-school Roger Murtaugh (Danny Glover’s Lethal Weapon character), ready to save the girl he loves. That’s a romance we can all get on board with, even if you think you’re getting too old for this shit.

This is most likely the only Young Thug song that his skeptics would be aware of, due mostly to its ubiquity last summer. Maybe you heard an edited version while waiting in the checkout line at Old Navy, maybe you heard an unedited version blasting through the open windows of a teen’s car, but it’s a great possibility that you’ve heard this song before. Any parents should at least be able to crack a smile at the “I’m gonna ride in that pussy like a stroller” line, because it’s brilliant lyricism and you have presumably owned a stroller in the past. If that doesn’t do it for you, then it might be time to take a long hard look inward and find out what it is about you that makes it difficult for you to feel happiness.

This isn’t technically a Young Thug song, but he’s so deeply ingrained in the DNA of the track that it might as well be. The way he and Peewee Longway go back and forth on the verses is poetry in motion; the chemistry is undeniable, and their flows are so malleable together. It’s certainly not a shocker that two like-minded rappers from the same city would work so well together, but the quality of the work and the shared charisma is buddy-cop-franchise quality. I guarantee if some network was smart enough to give these two a show, it’d have NCIS ratings.

This is one of the most low-key tracks in all of Young Thug’s extensive catalog, a subdued piano riff accompanied by sparse drumming and some snap accompaniment backing the most mellow Thugger rhymes. Sure, he’s still getting as explicit as possible about his sexual endeavors, but there’s a restrained nature to his energy that sets this song apart. This is as close as Young Thug gets to a ballad, and while he’s definitely more in his element on high-energy tracks, this is a valuable look at the other side of the coin.

As a member of Rich Gang, Young Thug found himself in a bit of a strange position. Birdman was a known figure in the rap world, Young Thug was the up-and-comer and seeming heir to the throne of Lil Wayne, and young gun Rich Homie Quan was along for the ride as the most amateur member of the collective. Now that Rich Gang is no more, Young Thug seems to be the member that came out the strongest and has the brightest future ahead of him. “Lifestyle” was Rich Gang’s magnum opus, and Young Thug absolutely goes off. This is a period of Young Thug’s catalog that likely won’t appeal to too many elder hip-hop fans, but “Lifestyle” is an undeniably great track.

Sure, this song is about Young Thug fucking his friend’s sisters, but it’s also kind of brilliant. Young Thug plays around with some different flows on this track, departing from his usual high-energy tommy gun delivery for a more obtuse flow. Complicated romantic politics isn’t uncommon territory for hip-hop, but “Siblings” is a one-of-a-kind track that only Young Thug could legitimately put out.

As an Atlanta native, Young Thug is intrinsically tied to Gucci Mane in the same way that pretty much all rap that comes out of the city is. Thug and Gucci have worked together in the past, though, on Young Thugga Mane La Flare, so their relationship is a bit more complex. “Proud of Me” posits Gucci Mane as a sort of father figure for Young Thug, with Thugger rapping about the life he’s living now and that he knows Gucci would be proud of him and hopes that he will be when he’s freed from prison. Legitimately close relationships are few and far between in the rap world, and “Proud of Me” paints a picture of an enviable bond that these two share.

The music video for “Best Friend” offers a glimpse inside the mind of Thugger. In the video, he plays his own butler, his own lover, his own friends, proving to the viewer that the best friend he’s rapping about is in fact himself. Self-reliance on this level is essentially the apex of self-esteem. Young Thug can teach us all a thing or two about the importance of self-love, and that’s something any parent should be able to get on board with. Instilling a sense of self-worth in children is an important and vital part of raising them to be functional adults. Even Young Thug knows this!