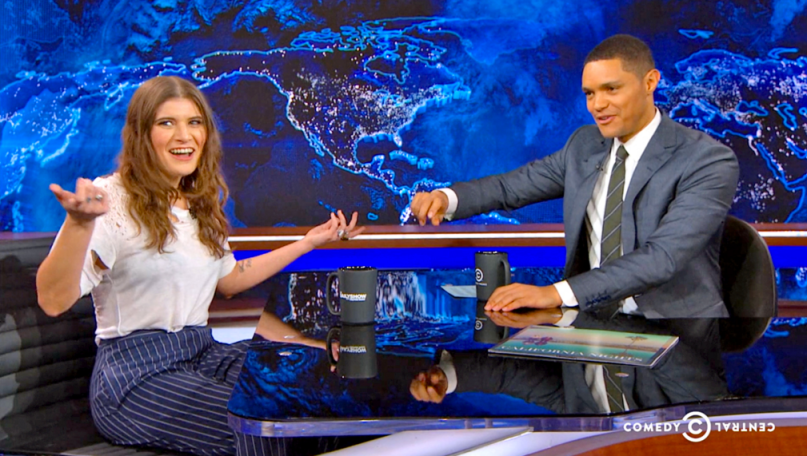 Bethany Cosentino of Best Coast found herself at the center of the discussion about music industry sexism when she spoke out against former publicist Heathcliff Berru. Though she initially entered the conversation in support of Dirty Projector’s Amber Coffman, who first opened the floodgates on Berru’s behavior, she soon found herself an unexpected but accepting spokesperson for women in music. Last night, she took that role national by appearing as a guest on The Daily Show with Trevor Noah.

In the six-minute interview segment, Cosentino highlighted that sexism and sexual assault aren’t issues localized to the music industry. “But as a woman, I felt it was so important to support my peer, my female peer,” she said. “I didn’t realize that it was going to become such a huge thing. I really didn’t. I thought, ‘You know what, I’m gonna back Amber because that’s what I feel that I should do. This is an incredibly important conversation that needs to be had.'”

She went on to talk about how fear of internet backlash might hold women back from coming forward with similar experiences, and how her speaking up about it could hopefully give others the motivation to do the same. She also added that while sexism isn’t a “top-down” issue, it is pervasive at all levels of the industry. “I work with a ton of men that are incredible… But there is a lot of people in the industry that do shady things. That treat you differently because you’re a woman. If I play a show at a venue — everyone else in my band is a man — there’s a sound guy that’s like, ‘You don’t know what you’re talking about, you’re a woman…’ It’s like, ‘You don’t know how to work an amp, you’re a girl.’ It’s like, ‘No, actually I do, watch.’”

See how easy it is to turn on an amp, and hear what else Cosentino had to say, by watching the interview below.