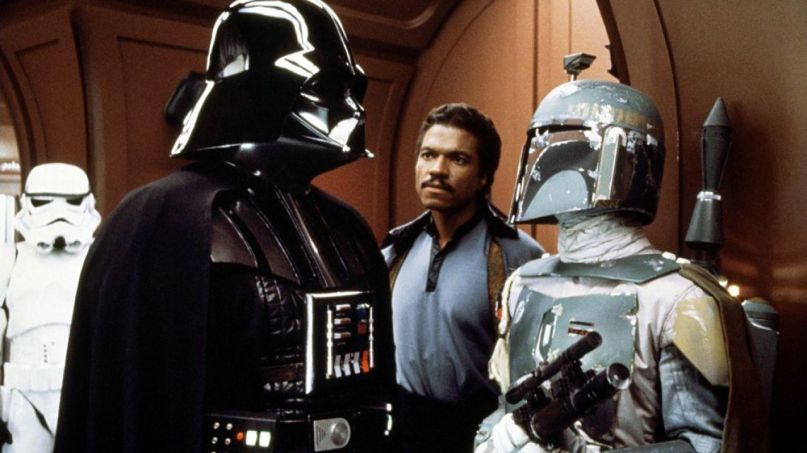 It just wouldn’t feel like May the 4th without a juicy tidbit of news from a galaxy far, far away. Craig Miller, Lucasfilm’s first official fan relations officer, offered up such a revelation in an interview with Inverse published this morning. It basically boils down to this: Boba Fett was supposed to be the main villain of Return of the Jedi, but George Lucas (in typical George Lucas fashion) changed the plot at the last minute when he decided he didn’t want to make a third trilogy.

Back in the late ‘70s, while Lucas was still in the process of writing and filming his blockbuster space trilogy, it was Miller’s job to keep fans interested and sustain the buzz between films. This was no easy task in an era with no social media and no renowned online film publications, and much of Miller’s work involved inventing strange rumors for fans to wring their hands over. He even went so far as to write a fake treatment for The Empire Strikes Back, which contained just enough details to seem credible (“like that there would be an ice planet”).

As Inverse notes, some of these rumors — originally published in Starlog Magazine — have been preserved online at Archive.org, including suggestions that Mick Jagger would compose the score for The Empire Strikes Back (!), Luke would convince Han to become a Jedi (!!), and the Millennium Falcon would enter a time warp and end up back in the Clone Wars (!!!).

(Ranking: Every Star Wars Film and TV Show From Worst to Best)

That Starlog column also contained quite a bit of information about Boba Fett, hinting at a more prominent role for the bounty hunter in Return of the Jedi than what we eventually got. Miller confirmed that there was some truth to those rumors.

“Originally Boba Fett was set up in Empire as a character, and the third movie’s plot was going to be more about Boba Fett, rescuing Han Solo, and all of that,” Miller explained. “Boba was gonna be the main villain… That was set up, why he was taking Han Solo away, why there was a thing with him in the Christmas special. When George decided not to make a third trilogy, he completely jettisoned that story line, which is why in the first 10 minutes, Boba Fett gets bumped into and falls into the mouth of a giant monster.”

“I remember sitting in a mixing room with George, working on Empire,” Miller recounted. “He told me he was just going to make the third movie, which didn’t have a title at that point, and then stop. He was going to retire from making big movies and make experimental movies. And that’s why the whole plot of the third movie, what became Return of the Jedi, completely changed.”

So let’s recount: We could have had a sweet-ass Fett/Solo storyline in Episode VI, but Lucas instead opted for a rush-job plot that resulted in the weakest entry in the original trilogy by far.

Considering how things turned out with The Force Awakens, maybe this was all for the best. But still, it’s hard not to begrudge Lucas for what might have been. Also, Jar Jar.