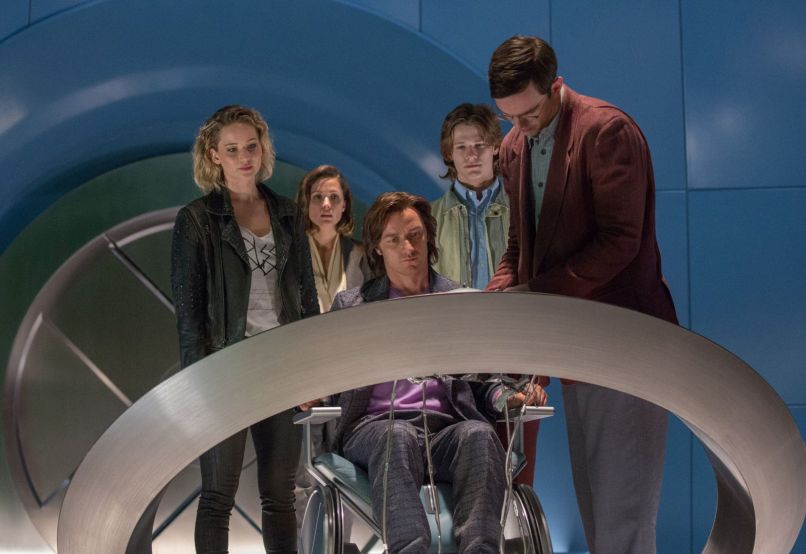 In 2014, Bryan Singer really cleaned his sandbox with X-Men: Days of Future Past. To be fair, he had a solid head start after director Matthew Vaughn did a lot of the heavy lifting with 2011’s X-Men: First Class. Nevertheless, all the time traveling and alternate realities offered a proper clean slate, especially after the franchise had become as twisted and gnarled as the cover of Steely Dan’s Pretzel Logic. What’s more, it stopped 20th Century Fox from hitting the reset button altogether — which they could have done with ease — and helped retain what’s currently the longest running comics-to-screen adaptation. Think about it. This sucker’s been nuclear since Friday, July 14th, 2000. That’s basically mutant-like endurance in this industry.

Yet the future’s still bright for the X-Men franchise, bright enough it might need some ruby-red shades. Yes, that slight Timbuk3 reference is totally intentional; it’s the ’80s for Charles Xavier and his School for Gifted Youngsters. A time when A Flock of Seagulls, Reaganism, Knight Rider, and Return of the Jedi are as popular as ever — so Summer 1983. But we’re not the only strangers in a strange, retro land as the world’s oldest mutant, Apocalypse (Oscar Isaac), has also stumbled into this decadent era. He’s a little cranky, too, considering he was supposed to dominate the world thousands upon thousands of years ago, so he’s out to do just that. Naturally, he needs a little help, which allows Singer to dip into Marvel’s rogues gallery.

Oh, does he ever! His latest sequel rivals 1997’s Mortal Kombat: Annihilation when it comes to the number of heroes and villains popping up, and he even nabbed Kitana’s costume for Olivia Munn’s villainous Psylocke. (Admittedly, the threads are straight from the comic — at her request even — but you can’t help but think of Liu’s squeeze.) She joins an overwhelming lineup that includes two squads of new faces playing familiar mutants: For Xavier, there’s Jean Grey (Sophie Turner), Scott Summers (Tye Sheridan), and Nightcrawler (Kodi Smit-McPhee). For Apocalypse, there’s Storm (Alexandra Shipp), Angel (Ben Hardy), and the aforementioned Psylocke. As one might expect, there are others on either side, but let’s not spoil everything, shall we?

There’s a lot to scour, too. Screenwriter Simon Kinberg works with one colossal story — dreamed up alongside Singer, Michael Dougherty, and Dan Harris — and admirably chews on everything he bites off. Trouble is, he spits it all out in the final act rather than swallowing it like a good boy. As he proved with Days of Future Past, Kinberg has some sharp instincts for how to take an ensemble cast and ricochet them across the world, but he leans too heavily on familiar conflicts and parades. How many times does Xavier need to draw Magneto into the light? When will any screenwriter learn that less is more? That maybe audiences are bored with the Roland Emmerich-stamped, Zack Snyder-endorsed explosions and chaos? These are yawn-worthy tropes.

Then again, if any villain warranted such madness it’s Apocalypse. He’s one of Marvel’s greatest threats and can crush the world unlike any foe the X-Men have ever encountered, but it’s only in the more intimate moments that he’s ever terrifying. Singer and Kinberg resort to all kinds of Cronenbergian body horror to underline his strengths as he literally decimates anyone who stands in his way. Sadly, Isaac doesn’t get much to work with, but the consequences of his pain and punishment are enough to shake the viewer. The issue is that when it’s his time to take center stage, namely during the not-so-rousing conclusion, he’s about as effective as Ivan Ooze, which is unfortunate given the potential at hand.

He’s not alone, though, as his accompanying Four Horsemen are also underwhelming. Munn hams it up as Psylocke, mugging the screen like, well, someone who stepped out of Power Rangers, while Hardy’s Angel never takes off and flies, even if he’s introduced to Apocalypse chugging vodka to Metallica’s “Four Horsemen.” That leaves Shipp’s Storm, a character who remains tragically underwritten and underused, and … okay, fine, I’ll say it … Michael Fassbender’s Magneto. (Was that even a spoiler? If so, apologies.) Once more, the Oscar-nominated star steals every scene he’s offered, and it’s his backstory that resonates the most, capturing a “What if?” family life in Poland that offers up the film’s most stunning scenery and drama.

That shouldn’t be too surprising. After all, when Singer has the time for more patient filmmaking, he knows how to deliver, and it’s during Fassbender’s early scenes that you start to remember the guy once made films like The Usual Suspects and Apt. Pupil. To that point, he does temper the action some, localizing many of the globetrotting setpieces to more economical measures. There’s an exciting cage match in East Berlin, a tense altercation at an Ohio high school, and an unnerving takedown in a sandy Cairo alley. These tighter, introductory portraits have always been one of this franchise’s strongest motifs, and Singer still finds a way to make them feel fresh some 16 years later.

Much of that success lies in the talent at hand. Faults aside, the series remains on-point in the casting chair, especially these post-2010 entries. Although Kinberg saddles them with some doughy dialogue, Xavier’s latest batch of students have way too much fun on the screen together. Sheridan, Smit-McPhee, and Turner work well as a team, matching their respective, older counterparts (James Marsden, Alan Cummings, and Famke Janssen) while also standing on their own two feet. Neither of them are as enthralling as, say, Nicholas Hoult’s brainy Beast or Evan Peters’ quick-witted Quicksilver, but they’re an admirable team that will grow as this series continues into the ’90s, which Kinberg recently confirmed.

Still, there’s a same ol’, same ol’ wash to X-Men: Apocalypse that wasn’t quite as apparent in the previous two entries. Save for the heightened gore and a couple arcs, there isn’t much that’s surprising in this installment. That feeling registers loudest when a certain government weapon is called upon for help, eliciting a ho-hum resignation that leaves you thinking, Oh, duh. Part of the problem is that we’re nearly two decades into this franchise, and there’s only so many times you can select a new character and get tossed into the next fight. Or, recycle the same themes of alienation, oppression, and goodwill. Because of this, X-Men: Apocalypse huffs and puffs a little, appearing less mutant and more human, but it’s still damn fun.