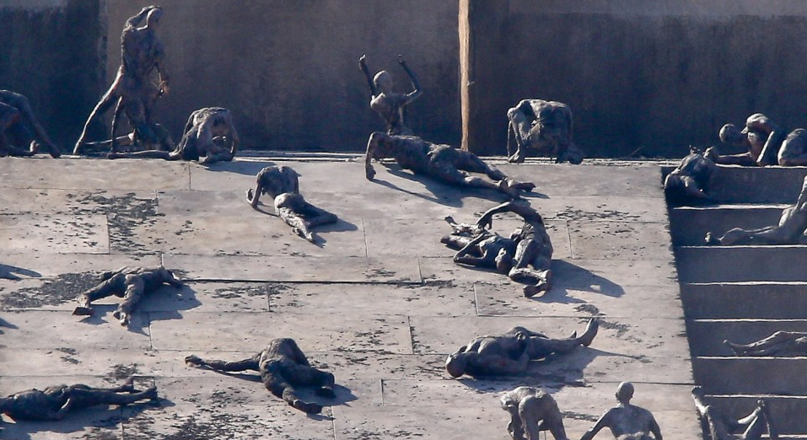 Right now, director Ridley Scott is busy at work in Sydney, Australia filming his sequel to Prometheus, Alien: Covenant. Although the story’s being kept under wraps and they’re shooting at various undisclosed locations, that never stops paparazzi from snapping up shots of the lavish sets.

Which is why we’re being spoiled with a handful of set photos from the upcoming sequel. As The Daily Mail reports, filming is underway at a remote quarry near the landmark city, and one savvy photographer was able to capture some of the magic — or, shall we say, nightmares. This stuff looks terrifying.

Judging from the photos, it would appear that the next unlucky flight crew in the Alien universe lands on a scorched planet of sorts, one that isn’t too different from the lava-leveled city of Pompeii. Those are burnt bodies, frozen in terror and panic, and if you look closely you can see they’re not exactly human.

Another shot hints of a large forest and the scope of those tree trunks are exemplified by nearby crew. Elsewhere, large stone structures and statues litter the area, falling in line with what actor Michael Fassbender recently dubbed “an old-school element where things look battered, like the original Star Wars.”

Ridley Scott returns to the universe he created in ALIEN with ALIEN: COVENANT, the second chapter in a prequel trilogy that began with PROMETHEUS — and connects directly to Scott’s 1979 seminal work of science fiction. Bound for a remote planet on the far side of the galaxy, the crew of the colony ship Covenant discovers what they think is an uncharted paradise, but is actually a dark, dangerous world — whose sole inhabitant is the “synthetic” David (Michael Fassbender), survivor of the doomed Prometheus expedition.