From Angst to Adulthood: What Happens When Emo Bands Grow Up?

Members of Dashboard Confessional, Empire! Empire! (I Was A Lonely Estate), The Get Up Kids, and others reflect on a genre they may have outgrown 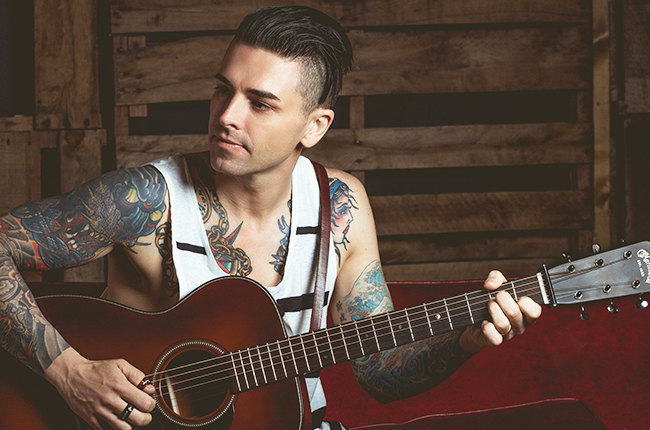 For better or worse, emo has always been labeled as a teenager’s domain. The reasons for this may never be entirely concrete. Some argue it’s because the music’s dominant quality is sincerity, and sincerity is most often associated with youth. Others say it has to do with a certain immaturity — an innocence, even a simplicity — that stems from being a teenager or early twentysomething.

So if emo isn’t “grown-up” music, the question then becomes: What happens when you’re still playing emo 10, 15, 20 years after you wrote the songs? Does the love for the genre carry over into old or even middle age?

This is a question Keith Latinen has struggled with at times. In 2006, Latinen was a 22-year-old who had been in his share of unsuccessful bands. He had even named his latest project, Empire! Empire! (I Was a Lonely Estate), after how out of reach things seemed; “Empire! Empire!” represented the dreams that were always out of reach, and “(I Was a Lonely Estate)” represented how incomplete those dreams felt.

In the decade since its founding, Empire! has become a staple of the so-called “emo revival,” but at the time no such thing existed. “When we started, no one was playing this type of stuff,” Latinen remembers. Ten years later, the genre is more popular than ever, but Empire! is coming to an end. Why now?

“It just felt like time to open a new chapter and close this one,” Latinen explains. “When our drummer left last time, I just stopped playing music. I wouldn’t pick up a guitar unless we had to, and then there was no reason because we weren’t playing any shows. I was sort of waiting for it to come back to me, because I don’t think you can force it.”

The music Latinen once loved eventually became a job rather than a creative outlook. It became a fun job, but it still became a job, and he simply didn’t have the heart for it anymore. This isn’t shockingly uncommon in any genre: There’s a reason Paul McCartney doesn’t play some early Beatles hits even though they rank among his best-known songs. What might make Latinen different is his willingness to pack it in and move on.

“There are certain jobs you can do and you don’t need passion and it won’t affect it, [but] having affection will always improve things,” Latinen says. He brings up teaching as an example. “If you lost your love for teaching, it would be an incredibly difficult thing to keep doing. And I would apply that to this band … it’s just that our priorities have changed. I don’t dislike any of it. I’m just not the person I was.”

Latinen’s not alone, but not every emo lifer shares his view. Chris Carrabba, the founder of emo powerhouse Dashboard Confessional and vocalist for Further Seems Forever, is best known for songs he wrote when he wasn’t quite an adult. He never intentionally wrote within a specific genre; he just set out to be honest. Maybe that’s why he still loves the songs.

“When I wrote the Dashboard songs, I was young,” Carrabba says. “I was experiencing life events for the first time, processing them as a young adult, and trying to come to grips with life.” Though his early songs might not be his most mature, they are some of his most immediate. “It was about not hem-and-hawing,” he remarks.

Bands drop songs from their setlists all the time. (Some even rely on the same setlist every night on tour, meaning once a song is out of rotation, it’ll never get played again.) This is an especially common practice among emo bands: The whole point of the genre is an honest examination of feelings, and it’s rare that those feelings are something you’d want to relive forever. But Carrabba has no qualms about playing any of his older songs.

“I’m still transfixed by [Dashboard songs],” he admits. “When you’re in the moment, you’re standing up in music and you get sucked up into that. It’s different than the day I wrote it. It’s like a tattoo.”

James Dewees, a 40-year-old musician who has been a member of Reggie and the Full Effect, The Get Up Kids, My Chemical Romance, and Coalesce, agrees. “It’s just like a tattoo,” Dewees says. “There’s songs that capture a certain moment in your life, whether you were 16 or 26 or 36. Music has that ability. The songs and music stay as a snapshot, and you never lose that meaning.”

My first thought after talking to Latinen, Carrabba, and Dewees was that their opinions might be influenced by the varying degrees of success they’ve experienced. Perhaps Dewees and Carrabba have had a joyful time performing because their bands draw massive crowds. While Latinen’s band is breaking up, Carrabba’s is playing amphitheaters across America this summer.

But then I also talked to Carly Comando of Slingshot Dakota, an emo band that has been around since 2003 and is still crashing on friend’s couches and living out of a van. Comando has stopped playing certain songs over the years, but she hasn’t lost her affection for the band or genre with age.

“There are some songs we don’t play anymore because of what they mean to me,” Comando explains. “[Drummer] Tom [Patterson] and I are married, and I have no interest in singing about some dude from 2004. But honestly, there are songs that fans request that we haven’t played in years, and we’ll try to play them even if we don’t know them.”

So if staying true to your emo roots isn’t simply a matter of how commercially or financially successful you are, how do things change?

The obvious answer is that age brings physical changes as well as mental ones. This is particularly true at the lower levels of success (Commando now has no shame in getting a hotel every few nights, because you can’t sleep on floors the same way in your 30s that you can in your 20s), but it holds up at the top levels, too.

“I don’t have the same amount of energy I had in my 20s on tour,” admits Dewees, “and I don’t have the same eagerness now that I’m 40.” On top of that, his priorities have shifted in adulthood. “If I had the same responsibilities I did at 20, I would live at home with my parents and still use their gas cards,” he says. “I’m a married adult now, and it’s my job.”

Both Slingshot Dakota and Empire! feature husband-and-wife members (Empire!’s guitarist, Cathy, is married to Latinen), and both bands often relate more to parents coming out to shows than kids. The feeling is often mutual; as you get older, the music becomes less primitive, less screamy, more mature, more accessible.

As bands age, their audience ages, too. Some bands grow while others are seemingly damned to be buried in nostalgia, a permanent trip down Memory Lane. What’s surprising is that the bands themselves are entirely aware of this.

John Galm, the songwriter of the defunct but still hugely popular emo band Snowing, agrees. “[Early Snowing] lyrics are almost like a diary,” he says. “If I was embarrassed, I’d be embarrassed about my entire life at that point. Instead, I look back and go, ‘Oh, I was going through this.’ And I think that’s good. I like having that as a reminder of how I once was and where I come from. It’s important to me, even if you become a little detached to it over time.”

It seems like even those who love the genre eventually grow beyond it. Carrabba has folk-rock band Twin Forks as another outlet, Dewees has almost as many musical projects as fingers, and Galm has already moved on to hardcore band The Beds and his solo project, Bad Heaven.

Empire! and Snowing each decided to play one final show before breaking up for good. Empire! just held theirs in Michigan on May 7th, and Snowing’s is at the Square of Opposition Records Anniversary show on July 16th. Even with other things to work for, no one in either band wants to write music like they used to write. Maybe, at the end of the day, it’s that same honesty and self-examination that causes things to end: When you age out of emo, you simply move on.

“Nah,” Carrabba refutes, stubborn as ever. “Sorority Noise and Beach Slang are two of my favorite bands of the past few years. My love for punk, pop-punk, and emo is never going to change.”