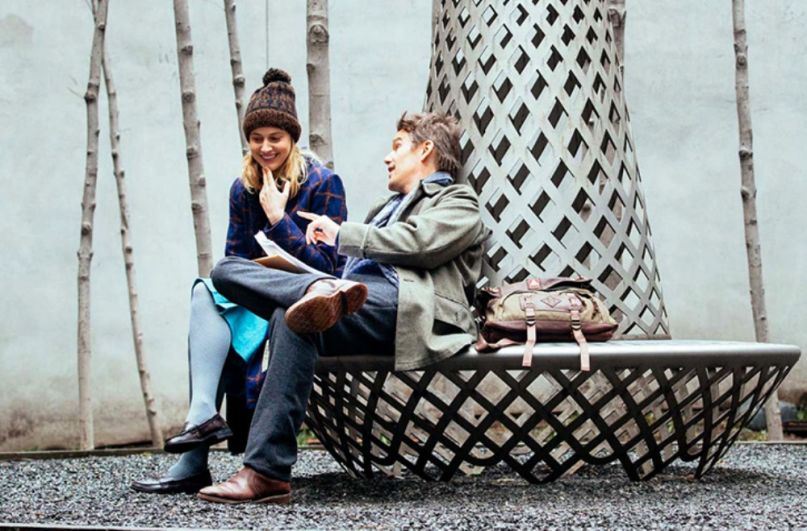 The following review was originally published as part of our 2015 New York Film Festival coverage.

In a way, filling out a cast with A-list actors frees the director of one of their most important responsibilities: delivering a story with a backbone. Just because you have the cast present for a great film doesn’t mean a film will become great, especially when it comes to coherence. While Maggie’s Plan—the fifth feature-length from writer-director Rebecca Miller—doesn’t suffer from muddled metaphors or grandiose themes, its scrambled plot and enunciated eccentricities lessen the importance of the comical story it’s trying to tell.

At its heart, Maggie’s Plan is a film full of plot. In fact, it’s arguably full of too much plot. Maggie, expertly played by Greta Gerwig, plans her life to the utmost degree, which means she’s taken it upon herself to have a surrogate baby from a pickle entrepreneur (he really does call himself that). After bumping into John (Ethan Hawke), she reconsiders those plans. The heartthrob adjunct at her workplace, the New College, starts a back-and-forth editing session over the novel he’s writing and they get smitten — despite his unhappy marriage with the insanely successful Georgette (Julianne Moore).

From there, the film doubles over and inverts itself, turning into a bizarre shape that doesn’t quite represent anything. Maggie’s Plan files vivid scene after the next with detail-heavy moments that feel very much like a chapter from John’s book. Given it’s a New York film, it boasts academia that’s both blunt in its humor and easy to guess. Here, “like” is a word condom, stacks of books don’t signify a well-read person, and becoming a pickle entrepreneur is admirable in its cheekiness. It’s a revival of Gerwig as her Lola Versus character—a charming but disadvantaged late-20s city girl making the most of her fraying life—with more personality and more confidence.

Miller designed this to be a plan, and she’s not ready to sacrifice certain footage. If the movie is meant to replicate their life in its structure, then Miller deserves props. It’s too unclear whether that was actually intentional, though. As engrossing as these characters are, the web tying them all together starts to bend under the weight of speedy cuts. The film takes large steps across the time spectrum, sending us soaring into a few transition clips before settling on the next scene where we are buckled down.

And yet, with each scene glued on to the next so abruptly, we’re introduced to more faces we recognize, more stars we love—Bill Hader, Maya Rudolph, Wallace Shawn—and with them come pre-associations that taint the film. When a comedy-based actor takes on a serious role, we box them in, fighting to keep them as the categorized person we’ve deemed them as. Maggie’s Plan fumbles with clarifications on what is and isn’t supposed to be a joke.

At times, it seems Maggie’s Plan plays into that. The opening scene—a tight shot of Gerwig’s back as she walks through a NYC park, slightly disheveled but forever endearing with an “Imagine there’s no fracking” pin on her backpack—is the quintessential Gerwig frame we’ve seen before (Frances Ha, Mistress America). Hawke toys with his glasses like the dreamboat dad he does best (Boyhood, Before Midnight). Rudolph nurses a wildly rebellious child between apathetic sighs like a continuous thread from one film (Away We Go, 50 First Dates) to the next (The Way Way Back, Grown Ups).

Hader is the snippy, anxious relative who’s still got heart tucked away beneath a hard shell (Inside Out, The Skeleton Twins), lest we mistake him for the comedian we used to watch on TV every week. Moore slips into the work powerhouse she’s been cast as with a helping of neuroticism, either by her own accord (Maps to the Stars) or that of fate (Still Alice). But they were cast for a reason–they do these characters well. Each star plays into their role with a coy awareness of who they are, the stereotypes they hold, and, like a less obvious They Came Together dynamic, the inner humor of their own stereotypes.

That’s just it. They’re funny, but it’s never clear if what they’re making fun of is what we’re laughing at. By the time Kathleen Hanna appears onscreen singing experimental tribal wails at one of Georgette’s work retreats abroad—it’s so out of place that I second guessed if it was the riot grrrl herself, verified only by the credits—the cast list loses its shine. What’s the point? The film moves with speed equivalent to a teenage girl’s rushed story summed up between classes.

It’s enjoyable when you’re caught in a character’s intricacies mid-scene, but when it shoots to the next, you’re wondering what there’s left to take away, why there was no pretty bow, and what’s the objective the film’s rushing towards. It’s messy beyond the control of the characters. The script, although endearing, is too poorly edited to lift its quirks to the next level, no matter how many stars show up for roll call. Maybe those hiccups in the storyline that see us zip from one pivotal moment to the next without the fancy glossed transition in between add to the charm. They would work best if we knew, for sure, that was the goal.