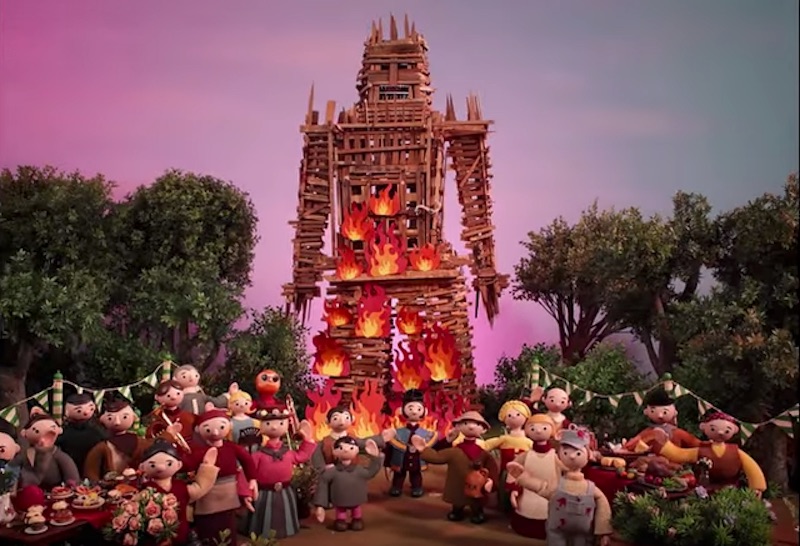 In case you haven’t been within a mile of the internet in the last 24 hours, Radiohead have released their much-anticipated new song “Burn the Witch”, along with a stop-motion video that’s best described as unsettling. In the eerie clip directed by Chris Hopewell and inspired by the British children’s TV series the Trumptonshire Trilogy, a man is given a tour of a picture-perfect town in which the residents do unspeakably creepy and violent things to each other. The video culminates in the man nearly being burned to death inside a massive wooden effigy — a clear homage to 1973 British horror film The Wicker Man.

In a recent interview with Billboard, the animator behind the video, Virpi Kettu, discussed the motives behind “Burn the Witch”. Interestingly, she believes the video was intended to be happier than the song. “They wanted the video to contrast with what they’re playing and to wake people up a bit,” Kettu explained.

Kettu also said that the band wanted the video to raise awareness about Europe’s refugee crisis and the “blaming of different people… the blaming of Muslims and the negativity” currently engulfing European politics. She brought up the cryptic postcard that some Radiohead fans recently received in the mail, which read, “We know where you live.” Aside from being downright terrifying, she opined that the band was trying to recreate the climate of fear that politicians have encouraged in response to Muslim immigrants.

Check out the video for “Burn the Witch” below.