The Hotelier Keep Fans Close and Critics at Arm’s Length

The Massachusetts punks want a real relationship with listeners, but what does that even mean? 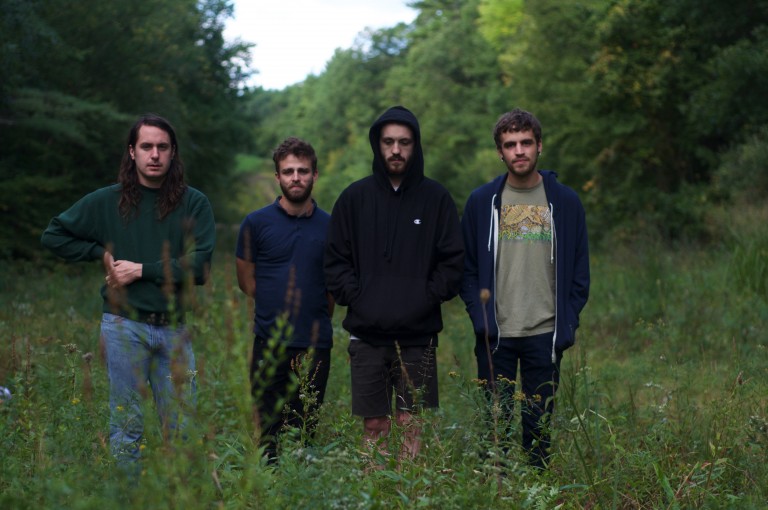 When Massachusetts punks The Hotelier perform a show, they more or less know what to expect: a night filled with passionate, communal shout-alongs. Watch just about any YouTube video of the band performing “An Introduction to the Album”, the opening track of their 2014 breakout, Home Like Noplace Is There, and you’ll see a highly invested group of young fans hanging on every word. And those fans don’t come from just one scene — part of Home’s grassroots success stemmed from how well it blurred the line between DIY punk, top-shelf indie rock, and heart-on-the-sleeve emo.

As I spoke with frontman Christian Holden over the phone in early April, his voice seemed a few steps lower than usual. Holden had been sick for a few days, which inconveniently overlapped with a run of practice shows ahead of The Hotelier’s European tour. The night before our phone call, the band had performed at Northeastern University and leaned more on crowd shout-alongs than new material — no accident, Holden joked, given the sorry state of his voice.

Still, one can imagine a situation in which the band’s entire show becomes one long, extended shout-along. The Hotelier will release their third proper record, Goodness, on Friday, and the quartet’s still-growing fanbase has grown more rabid than ever before. Consider this: In the months leading up to Goodness, Holden and his publicist had to fend off waves of predatory web vultures trying to snag mp3 files before anyone else.

It’s ironic that some fans have resorted to deception as a means to gain access to The Hotelier before everyone else, because the band has always made attempts to be as candid and as forthcoming as possible. Holden even pens an annual “State of the Union” Tumblr post each January, and in the past he’s hosted an ongoing AMA to address topics most bands prefer to leave off the table. That AMA stopped in 2015, partly because fan interest had become so unwieldy. “We don’t do asks anymore,” Holden wrote, “because y’all are exhausting.”

Exhausting is right. What else to call “fans” who actively try to steal unreleased content from their favorite band? Some impostors have gone so far as to pose as other band members, publicists, and journalists from reputable media outlets. It got so ridiculous that Holden’s friends began sending him joking requests on Twitter, posing as everyone from Blink-182’s Mark Hoppus to Kanye West. His favorite came from his friend Katie. “[She] just said, ‘Hey, it’s Rolling Stone! Just send over those files,’ which I thought was pretty funny.”

For a record that has inspired such convoluted internet scams, Goodness couldn’t be further removed from online culture. As its feather-ruffling, NSFW cover art suggests, the album looks beyond the suburban turmoil of Home and significantly widens the scope of what a Hotelier record can be. With its evocative instrumental interludes, expanded track lengths, and refined dynamics, this is clearly an airier and more adventurous work than its predecessor. It’s also more focused on the natural world, with many of the album’s field-recorded sounds originating on the eight miles of trail behind Holden’s house in Charlton, MA. “I’ll just go on a super-long walk,” Holden says of his writing process these days. “I’ll think about the concepts of the song, how it will develop, and how it fits into this whole narrative.”

A too-general narrative of Goodness would be that it’s a “love record,” as Holden cheekily called it in this year’s “State of the Union” post. The characterization isn’t wrong, but it doesn’t cut at all the knotty, universal truths that Holden parses about romantic and platonic love. Much like Pinegrove’s stellar debut, Cardinal, from earlier this year, Goodness strives to communicate in clear, meaningful ways with those who matter most. On the opening poem, which Holden says he wrote while working as a camp counselor in Vermont, he veers from the facade of sincerity: “I would smile, but it would be meaningless. I wouldn’t want it to be.”

This focus on authenticity — on realness — aligns with The Hotelier’s attempts to cut out the middle man when dealing with their fans. In an email Holden sent to the band’s mailing list, he politely implored fans to tune out any music critics tweeting about the album ahead of its release. “We are all really proud of this record,” he wrote, “but we would like to let you all have your own personal relationship and reaction to our new material.”

Of course, the lines aren’t always as clear as they seem. Music critics often double as passionate fans, and many develop personal relationships with the material they’re covering. Even so, Holden seems to have a grasp on music-industry power dynamics — namely, that a small crop of voices can stick out and influence the discourse in a positive or negative way. Until recently, just getting coverage had been half the battle for so-called emo revivalists; these days, it seems they expend more effort trying to limit that coverage.

This time around, at least, The Hotelier are playing the game, debuting a few singles before the album drops and agreeing to interviews like this one. But Holden is still wary of fragmenting the record and presenting it as something other than a complete, finished product. “I want to feel more in the reins of this thing we’re showing to the world,” he explains, “not just [release a single on] some site at noon, on a Monday.” It’s not how most bands are doing it these days, but Holden is right to stick to his guns. Goodness is simply too large and too emotional a work to take in piece-by-piece. But really: Don’t take our word for it.