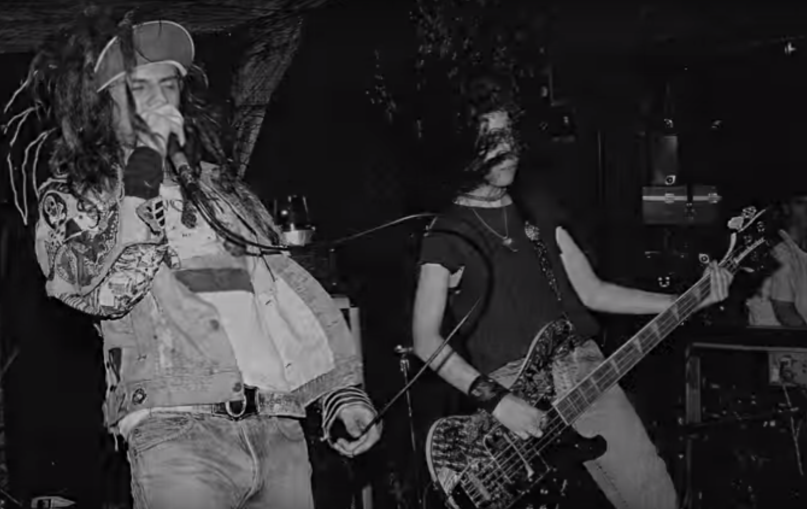 Before “Thunder Kiss ‘65” became an MTV staple and long before Rob Zombie’s film career took an unfortunate turn at the fun house, White Zombie was at the top of the class of New York City’s underground noise-rock scene of the mid-1980s. Led by Zombie and co-founder Sean Yseult, the group pioneered a weirdo brand of horror punk that borrowed enthusiastically from The Misfits and Bauhaus without sounding too much like either influence. The group’s early stuff is truly the work of art-school rejects: sloppy, visceral, and wholly unconcerned with polish.

On June 3rd, White Zombie will release a retrospective box set featuring 39 tracks from the band’s early career, all remastered by guitarist Jay Yuenger. Coming via the Numero Group, It Came From N.Y.C. will include five LPs (or three CDs) along with a 108-page hardcover photo book. The first taste of the set comes via the Wall Street Journal’s Speakeasy, which has premiered the previously-unheard “Scarecrow #2”.

The track instantly distinguishes itself from White Zombie’s later, more radio-friendly work. Yuenger’s guitar jams along in what is essentially a nonstop solo, while Zombie’s snarling vocals sound fresher — and more dangerous — than ever. “We knew exactly what we were doing,” Yseult tells Speakeasy in reference to the track’s loose, jammy vibe. “That’s what we were going for. There’s some really cool stuff in there.”

Check out the remastered version of “Scarecrow #2” via Soundcloud below.

It Came From N.Y.C. Trailer: