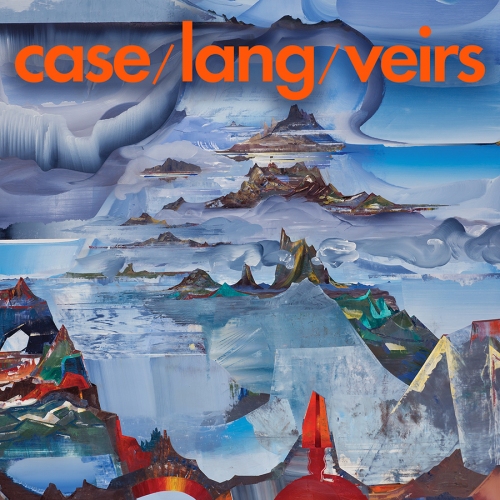 There’s a warm, diffuse glow to the self-titled debut album from case/lang/veirs, the understated supergroup (can there be such a thing?) composed of Neko Case, k.d. lang, and Laura Veirs. Each of these songwriters has an impressive legacy and a spotlight to call her own if she wants it, but their current project seems uninterested in chasing individual accolades. With little left to prove as musicians in their own right, they have turned in a record that seeks out meaning in life’s quieter places. The result is something of a contradiction: a collaboration defined by its stunning intimacy, in which the coming together of three distinct voices does little to dilute the raw confessionalism of their solo careers.

It’s difficult to imagine someone more capable of handling the interpersonal dynamics of a supergroup than Case, whose stint with The New Pornographers has shown her how to make her presence felt alongside similarly talented musicians. But lang and Veirs seem just as capable of sharing the stage, and at no point on case/lang/veirs does one seem in danger of stepping on the other’s toes. This is likely the result of thoughtful design; in naming their project case/lang/veirs, the three singers likely sought to establish a baseline of equality that eliminates the traditional roles of lead and backup.

As if to hammer that point home, the album’s opening song, “Atomic Number”, features all three singers trading lines in the verses and converging in the chorus. Case’s voice sticks out as the most piercing of the three, but lang’s lends a warmth and a strength that supports without undermining. It would be a fool’s errand to say which of the members is the most indispensable, as moments like this show the extent to which case/lang/veirs is a package deal.

The rest of case/lang/veirs gives each singer her own moment to sparkle, and they manage to spread the highlights fairly evenly. Case turns in possibly the album’s strongest vocal performance on “Delirium”, a song that stands up to the highlights from her 2013 solo effort The Worse Things Get, the Harder I Fight, the Harder I Fight, the More I Love You. Though she’s singing from a spiraling state of mental confusion, Case seems remarkably in control of her delivery and vocabulary, molding words such as “kaleidoscoping” in the way that only she knows how.

Though the three singers wrote these 14 songs together, one gets the sense that Case is responsible for most of these tiny, magical moments. “From the garbage to the stars/ We’ll make new constellations,” she sings on the quiet, contemplative “Behind the Armory”, putting her own spin on the famous line from Oscar Wilde’s Lady Windermere’s Fan.

The group follows up this moment of vivid poetry with the effervescent indie pop gem “Best Kept Secret”, a song that delights in turning the hipster cred of L.A.’s Silver Lake neighborhood into an unironic celebration of love and friendship. “It was done in one or two takes, and it went down super-fast,” lang said of the song when it debuted in Lena Dunham’s Lenny Letter newsletter. “We were all dancing. It just had so much joy. Then Neko came up with that ba-da-da ba-da-da ba-da-da ba-da-da. It just kind of unfolded in this really joyful, celebratory way.”

case/lang/veirs tempers this joy with plenty of moments that seem — if not quite sad — wistful in the manner of classic country ballads. Veirs, who is perhaps the best narrative lyricist of the three, stretches her talents to heartbreaking lengths on “Song for Judee”, in which she recounts the story of folk singer Judee Sill with such gut-punch lines as, “They found you with a needle in your arm/ Beloved books strewn about your feet.” In a less pointed way, lang echoes that grief on “Blue Fires”, a song that suffers from a weak central metaphor (“Why does the heart of the flame burn blue?”) but features a stunningly evocative vocal performance nonetheless.

Though it’s not short on moments of aching beauty, case/lang/veirs is never quite as arresting as the strongest material from its constituent artists. It doesn’t particularly try to be. The album registers as a wave softly lapping at the listener’s conscious, asking politely to be let in rather than bursting down the door. Songs like “Down I-5” revel in the poetry of the mundane to such an extent that they risk falling in the dreaded coffeehouse genre, but even the weakest moments here are harmless. Pleasant is the most damning descriptor that comes to mind.

case/lang/veirs is certainly a cut above whatever record is playing in your local Starbucks at the moment, but it’s also content to steer clear of grand statements in favor of something more real-life. Erring on the side of unambitious is a smart move for a supergroup to make, and it opens up room to explore the smaller truths that help these singers relate to one another and to the world at large. If you learn anything from listening to this record, it might be that we aren’t so alone after all.