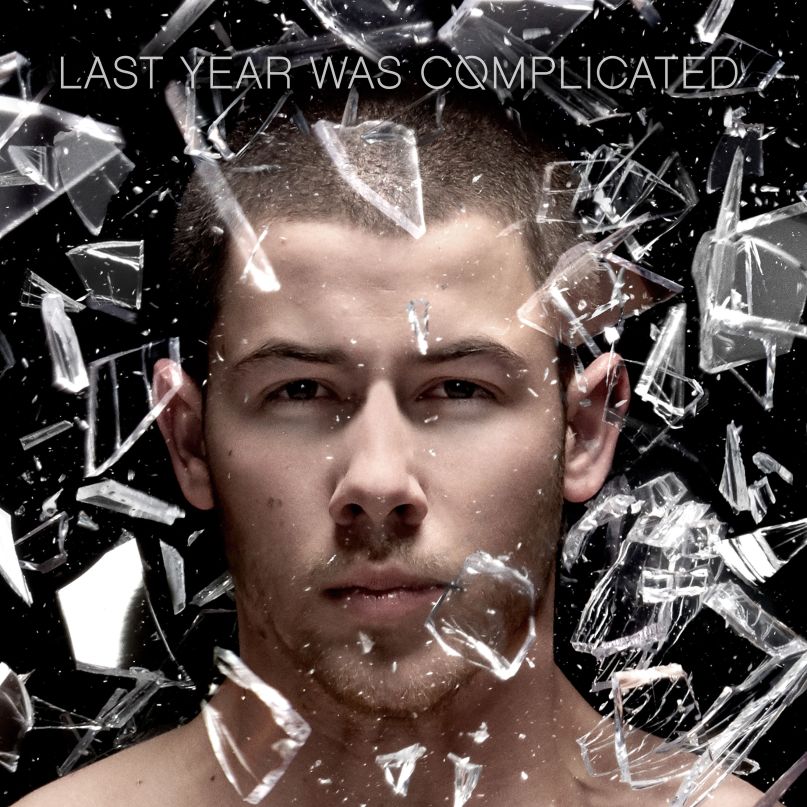 Last year was a big one for the most beloved Jonas Brothers alum: Riding high off the success of monster pop hits “Chains” and “Jealous” Nick re-released his self-titled sophomore album with another engaging single, “Levels”. For a minute, it looked like Nick Jonas was positioning himself as the next Justin Timberlake, a former child star able to break away from his bubblegum aesthetic and demonstrate real artistic merit that still functions in a pop context.

Timberlake collaborator Jay Z seemed to believe in that cause, as he supposedly felt that this was Jonas’ destiny and wanted to help guide him towards it. In fact, it was Jay Z who came up with the title Last Year Was Complicated after rejecting Unhinged as a title and asking Jonas how the last 365 days had been. If the end result is to be believed, last year was pretty arduous for Jonas, but that doesn’t mean he’s emerged from it with a greater sense of clarity or accomplishment. Jonas is an adequately marketable pop act, but with Last Year Was Complicated, that’s where it ends.

Timberlake succeeds as a solo artist because he came from a strong pop foundation with NSYNC, a good start towards the timeless-but-adventurous sound he would later achieve. Inversely, The Jonas Brothers had no functional real estate in pop: They were a tween-oriented Nickelodeon media entity whose glossy brand included sanitized pop punk that sounded like The All-American Rejects got slimed with Purell.

True pop is a relatively new game for Jonas, and after he got his first burst of it out of the way, he’s been left scraping the bottom of the tank (and largely coming up empty-handed). JT is also an infinitely charming and charismatic personality, and the youngest JoBro just hasn’t shown that he has that. At the very least, it doesn’t shine through in his latest batch of music, which comes off as ephemeral as the vast majority of contemporary Top 40 fodder.

Still, there are flashes in the pan that show why Hova believed in Jonas at all: “Voodoo” is a strong album opener whose exotic, alternative groove kicks things off with a dose of promise. The only problem, and it’s a big one, is that while Last Year Was Complicated is completely adequate, its highlights are a SparkNotes summary of the pop music from the past 12 months.

Everything that Jonas does well here has been done much better by somebody else, and those memories are still too fresh in the zeitgeist for this album to seem novel: “Voodoo” is fun, but it sounds like a watered-down DJ Snake skeleton track. “Champagne Problems” is propulsive with its basic percussion and bassy synths, but those three minutes would be better served listening to The Weeknd. “Touch” brings some more organic-sounding instrumentation into the mix, but we already have Bruno Mars. “Under You” makes it exceedingly clear that, like the rest of the world, Jonas also danced along in his car to Taylor Swift’s “Style”.

As an adage, “great minds think alike” is flawed: The reason a lot of great minds are great is because they don’t think like other minds. Trying to emulate your heroes is rarely successful because their success came from being the first to do what they did. It’s hard to make music that sounds fresh when nothing about it actually is.

Although not technically his sophomore album (he released a self-titled LP as 11-year-old Nicholas Jonas in 2005), Last Year Was Complicated nonetheless slumps under the weight of the hype and pressure that preceded it. It’s like Bobby Moynihan’s unreliable and mulleted Saturday Night Live character Anthony Crispino, who provides half-remembered “second-hand” news during Weekend Update: It’s close to what’s actually happening in the world and it’s still entertaining in its shortcomings, but it’s not what Colin Jost was looking for.

Essential Tracks: “Voodoo”, “Champagne Problems”, and “Under You”