The Felice Brothers – Life In the Dark 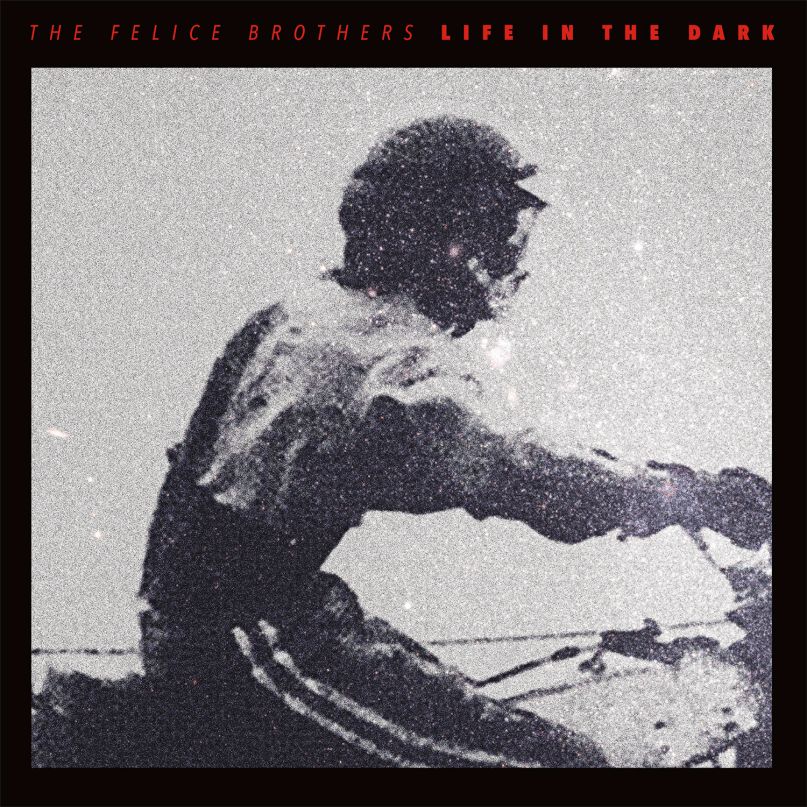 It’s a sweltering summer afternoon in New York City’s subway system, and five scraggly men stand on the platform with instrument cases ajar, making the kind of cacophony that sends some commuters’ eyes rolling while others dig in their pockets for loose change. Every sensory detail contained within this scene — from the thin reverb of the semicircular hall to the beads of sweat steadily dripping onto the young man’s accordion — is baked into The Felice Brothers’ DNA.

In the decade since they started making music, the plain and affable folk rockers have earned some lofty comparisons to Bob Dylan and The Band, thanks in no small part to vocalist Ian Felice’s nasally twang and penchant for silly wordplay. But to really understand Ian and James Felice and their honorary brothers in arms, it’s more helpful to look in the other direction, away from the stars and down into the subways where they got their start.

On their latest studio album, the appropriately titled Life In the Dark, The Felice Brothers come across as a ragtag, anonymous bunch of storytellers and social miscreants, playing music only as a means to afford the next train ride out of town. This isn’t reality, but they do a good enough job of acting the part. Like Dylan in his early years, they’re both strikingly talented and desperate to pass for something they’re not. The group has steeped itself in the mythology of midcentury America until past and present, fact and fiction become blurred; when Ian sings of “rivers of red majesty” and references the “land of the lost Cherokee” in “Jack At the Asylum”, there’s little to distinguish him from Woody Guthrie or any number of anonymous, guitar-wielding poets from the same lineage.

There’s a comfort in this familiarity, and if they catch you in the right mood, any of the nine songs on Life In the Dark can feel like slipping into a pair of worn-in dungarees. Ian Felice’s version of America may exist only in storybooks and lyric sheets, but ironically it’s the kind of thing nearly everyone can relate to. This is how The Felice Brothers have survived and even thrived for 10 years: by writing and playing the kinds of songs that compel folks to throw coins into their guitar cases before catching the L train home. Sure, their audience may have widened in that time and they may have indulged in a bit of electronic experimentation, but they’re still playing for pennies in their own minds.

This mentality leads to songs such as opening track “Aerosol Ball”, perhaps the most Dylan-esque of the batch in its gleeful, nonsensical wordplay and in the way Ian always seems on the verge of cracking himself up (see “I Shall Be Free No. 10” for the song’s closest spiritual predecessor). Against a steady, rhythmic fiddle and bass line, he packs in the rhymes so tight it seems as if every line is liable to burst. “The rain in Maine is made pf novocaine” gives way to “Every tooth in Duluth is Baby Ruth-proof”, and so on and so forth. While this kind of farcical poetry is likely to drive the folks over at Genius mad, it’s the perfect thing for catching the attention of passersby and drawing them in for a few moments of mindless pleasure.

“Plunder” uses a different trick to the same effect, rendering its refrain (“Plunder, plunder, rain and thunder”) in the same rapid-fire trochaic tetrameter that Shakespeare used in that famous line from Macbeth: “Double, double, toil and trouble.” The line is famous because its musicality makes it hard to forget, not because it contains even a trace of wisdom or common sense. Similarly, “Plunder” is one of the most effective tracks on Life In the Dark because it hammers its refrain into your head. This is folk music — really, all popular music — at its most elemental, a collection of verses that bide time between the rousing, singalong chorus.

Sometimes The Felice Brothers get a little too liberal with their pageantry and cross the line separating the playfully endearing from the cloying and artificial. The six-minute ballad “Diamond Bell” is one of these moments, telling the drawn-out story of a man who gets mixed up with a deadly gunslinger called Diamond Bell and ends up hanging from a rope for all his trouble. The song is filled with cliches pulled from books and movies about the Old West, and not one word of it rings with any kind of authenticity. Though they’ve got more folk/country cred than anyone from the Mumford & Sons school of songwriting, The Felice Brothers seem out of their depth here, reveling in tired imagery and pretending to make it fresh by changing just a few small details.

If Life In the Dark proves anything, it’s that the line between authentic and artificial isn’t always clear. One of the album’s quiet successes is “Triumph ‘73”, a melancholy tune about choosing the thrill of a motorcycle over a relationship that will likely end in heartbreak. If you couldn’t tell from that description, this one has Springsteen and Blood On The Tracks-era Dylan deep inside its veins. And yet, somehow, it works beautifully, painting a new and deeply human picture with the same old brushstrokes.

Who doesn’t occasionally feel the urge to ride off into the sunset and leave their cares behind, the wind blowing through their hair? It’s the opposite of cramming into a crowded subway car after a long day of unforgiving work. That’s life for quite a lot of us, but we get by with some help from the storytellers who help us imagine broader horizons, even if they themselves are packed into a six-by-six square of underground real estate, begging for some change, or even just a moment of our time.