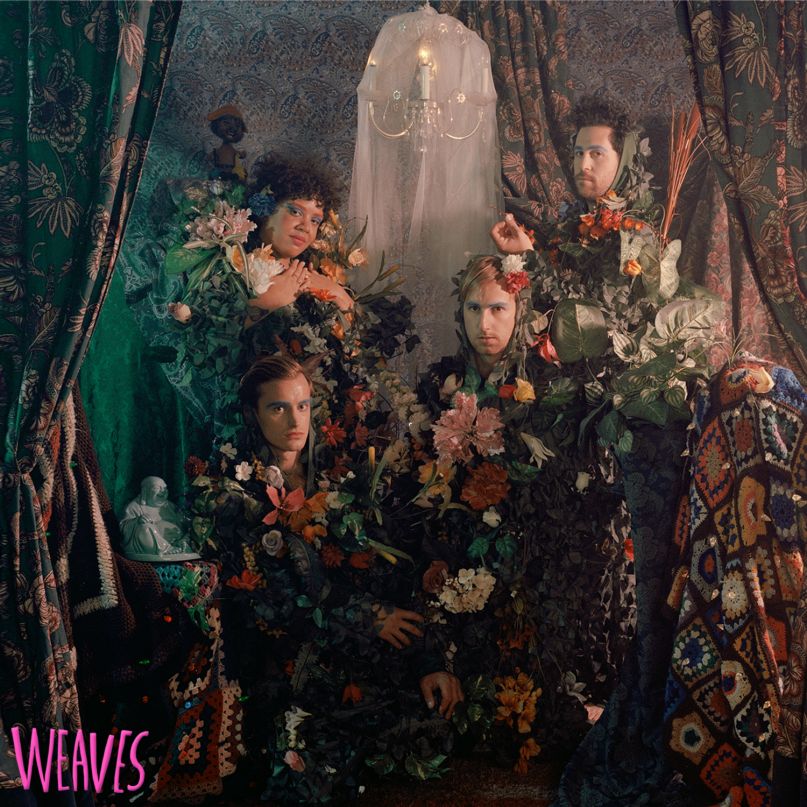 Picture the classic rock band. It’s likely you’re thinking of a four-piece: bass, guitar, drums, vocals. Though they might at first glance look pretty standard, Weaves are not doing that kind of math. On their debut, the Toronto quartet shed the restraints of indie rock structure and form, letting something more emotional drive their sparse and artistic sound. Emerging from their city’s well-established noise rock scene, Weaves’ music is difficult to pin down, yet undeniably memorable. A distinctive wonky guitar sound, commanding vocals, and disobedient rhythms create something beautifully unhinged and challenging.

Early single “Coo Coo” is a solid representation of how a band’s apparent dysfunction can actually function quite well. Other than the rolling patter of the drums, the song offers little in terms of stable ground, and is instead the sum of spats. The guitar comes in fits, and the twirling melody at the beginning quickly unravels into something sharp and full. The lyrical declarations of madness are reinforced by the frenetic instrumentation. The album is built on this sort of deconstruction, and as the songs rip apart, a rewarding sense of unpredictability builds. Where other bands might fall into incoherence, the eccentricities build into something more logical and fit into the a context of the rest of the record.

The weird whirls and snaps that guitarist Morgan Waters is able to provoke from his instrument are bizarre, but even when laden with effects, his riffs are always clear enough to work. Zach Bines’ bass lines boldly anchor the most heavy and dramatic moments on the record. Opening track “Tick” has an oddball energy, and the “tick” of the guitar line strikes the sort of spacey tone one might find on early Flaming Lips records. Most tracks, though, have a sharper, more punk-oriented edge, and songs like “Candy” suggest some potentially darker places for the group to shine its flashlights. Drummer Spencer Cole’s irregular rhythms and Jasmyn Burke’s tense vocals give each song added layers of quirk. Though the album rarely slows to walking speed, the dramatic shifts in pace and full stops change things up at every needed moment. If there’s a big criticism to be found, it might be the uniformity of the vocals. Although Burke’s voice is tight with urgency in every song, her tones sometimes fail to parallel the band’s volatile dynamics. It would be satisfying to see a wider range of feeling.

Weaves have put themselves at a compelling intersection of pop, noise, and rock. They’ve created their own unique sound, and their self-titled record features more than a handful of fun, exciting songs. Weaves may not be using traditional formulas to craft these songs, but they certainly have a handle on chemistry, and that gives them the potential to create something truly explosive in the future.