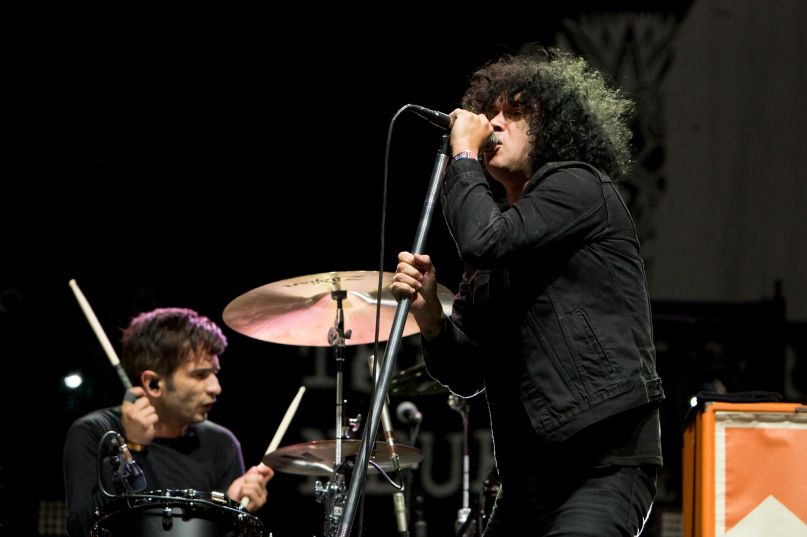 At the Drive-In // Photo by Philip Cosores

Somebody get Cedric Bixler-Zavala some warm salt water to gargle. Oh, and a refund for his New York City-based fans would be great, too.

As Brooklyn Vegan reports, At the Drive-In were forced to cancel their show at NYC’s Terminal Five tonight due to a nagging illness that has caused their curly-haired frontman to lose his voice. The unfortunate cancellation came just two hours before the show was scheduled to begin, as guitarist Omar Rodríguez-López and drummer Tony Hajjar came on stage before the opener and explained the situation to fans. The show should probably have been cancelled a lot earlier than that, seeing as how their gig Wednesday night in Washington, D.C. was called off for the same reason. Below, check out some fan-recorded videos that show Hajjar and Rodríguez-López breaking the news to the stunned audience.

This gentleman in the balcony seems delightful:

Shortly after the non-show, the band released the following statement:

Apologies to all our fans in NYC that were coming to our show. Cedric has a health concern with his vocal chords and can’t perform this evening. It is not possible to play without furthering his injury.

Thank you for your support!

ATDI has a goal to be a band for a very long time and we don’t want to impede that in any way.

We will be back!

Tickets can be refunded from point of purchase

At the Drive-In’s next scheduled concert is Saturday night in Boston. As of now, that shows remains a go.