James Wan can't decide if he wants to make you shriek, cry, or shake your head 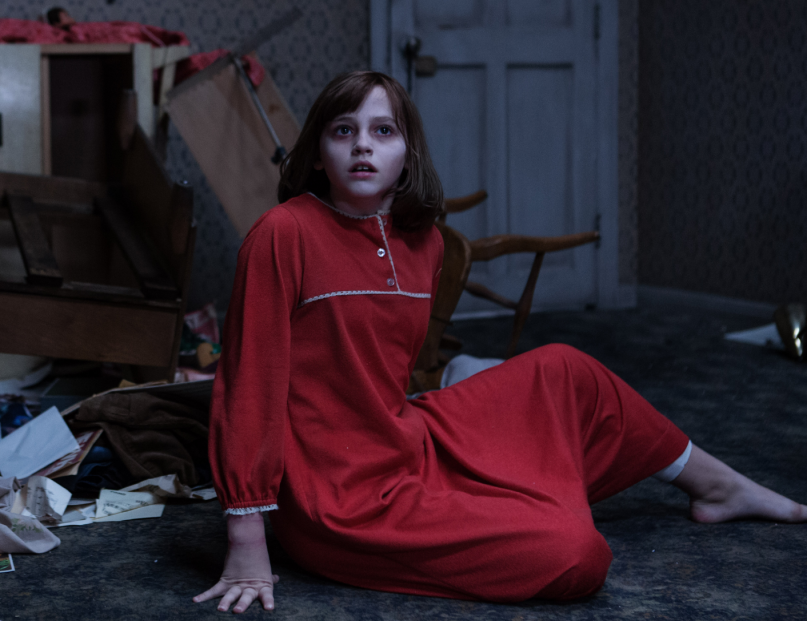 “Sometimes you gotta make a leap of faith — believe when nobody else will,” British paranormal investigator Maurice Grosse (Simon McBurney) emphatically pleads to American paranormal investigators Ed (Patrick Wilson) and Lorraine (Vera Farmiga) Warren. This exchange happens about three-fourths of the way through James Wan’s histrionic sequel to his 2013 horror blockbuster hit, The Conjuring. It’s one of a dozen seemingly meta contrivances that’s repeatedly thrown at the audience as if the producers are literally begging them to ignore the (easily Googable) fact that the Warrens were full of shit.*

Which is unfortunate because the whole “based on a true story” angle is not only well-worn territory, but also completely unnecessary in the Information Age. That gimmick may have worked wonders for, say, Tobe Hooper’s Texas Chain Saw Massacre way, way back in 1976, but that was because hunks in tight jeans weren’t Wikiing cool movie facts with their lady friends and discovering that a.) Ed Gein was actually from the Midwest and b.) never used chainsaws. Yet here we are in 2016, where, unlike the gluttonous riches of indie horror, the mainstream fluff continues to lean on old tricks and stale treats.

The Conjuring 2 could be the last gasp, though. Tired, worn-out, and spread thin, this second entry of what Warner Bros. and New Line Cinema are probably praying turns into a cinematic universe — more on that soon — contains absolutely nothing new to absorb. Creepy kids, violent possessions, old-timey toys, slamming doors, flooded basements, swirling furniture, gnarly old men, nu-metal demons, a Babadook knockoff, fast cuts, jump scares, and predictable callbacks haunt each and every scene of Wan’s would-be epic. It’s slick and stylish to the point of distraction. This isn’t horror; this is exaggerated carnival fare.

What’s worse, Wan fumbles any goodwill he cultivated with its stellar predecessor. At least that film knew how to juggle the two storylines — the Warrens and Ron Livingston’s nuclear family — and temper the extremities until the end. This time around, he goes tone-deaf, oscillating maniacally between clown shoes horror and perfume drama. Whenever the Warrens pop up, it’s as if the projectionist pulled a fast one and switched to a Lifetime Movie of the Week, complete with the most saccharine score to pop up in a horror film in years. By the end, you’ll wonder if the film itself was possessed … yeah, it’s that perverse.

One of the problems, at least with regards to the story itself, is that there’s simply too much going on. Even at a hefty 134 minutes, which is downright Apatowian for this genre, the sequel suffers an asthma attack as it huffs and puffs to touch upon every facet of what should be a straightforward ghost story. This is strange because, technically, the format hasn’t changed one bit; in fact, Wan mimics the original beat for beat, swapping the Annabelle cold open for Amityville and the Perrons for the Hodgsons. The difference is two-fold: this one’s 20 minutes longer and also far more transparent with its intentions.

Back in 2013, the idea of a sprawling cinematic universe wasn’t exactly en vogue, especially not for Wan’s little horror film that could — which, come to think of it, might have been the first summer blockbuster to star Lili Taylor since 1999’s remake of The Haunting. Anyways, that all changed when the damn thing raked in a staggering $318 mil worldwide, spawning not only this sequel but that much-despised spin-off film, Annabelle. As such, there’s a Marvel-esque mindset to The Conjuring 2, specifically how it keeps trying to be something bigger or bolder or broader than it ever really needs to be.

And that’s where the sequel stumbles and the horror starts feeling too calculated. Eventually, as the Warrens take center stage, the paint-by-numbers scare tactics take backseat to an even more pedantic mystery that oozes with the plastic suspense of a Dan Brown novel. By then, any attempts to be remotely terrifying are laughable at best as the characters trip, fall, scream, and run around to reach a conclusion that an over-the-counter Ouija board could have told you ages ago. In hindsight, you actually start feeling bad for this poor British family that’s been forced to share screen time with such syrupy melodrama.

To be fair, Wan does make a valiant attempt to match the style and locations of the actual Enfield poltergeist case, all the way down to the vintage ’70s wardrobes that can be seen in various eerie photographs scattered about online. Unfortunately, the film can’t shake its soundstage look, from the lighting to the exteriors to the weather, and this only adds to the nagging feeling that what you’re watching is nothing more than big-budgeted smoke and mirrors. This should be depressing, but in an era where prestige (see: Under the Shadow, Demon) and indie (see: It Follows, Creep) horror reigns, who cares?

*For what it’s worth, this writer believes in the paranormal.