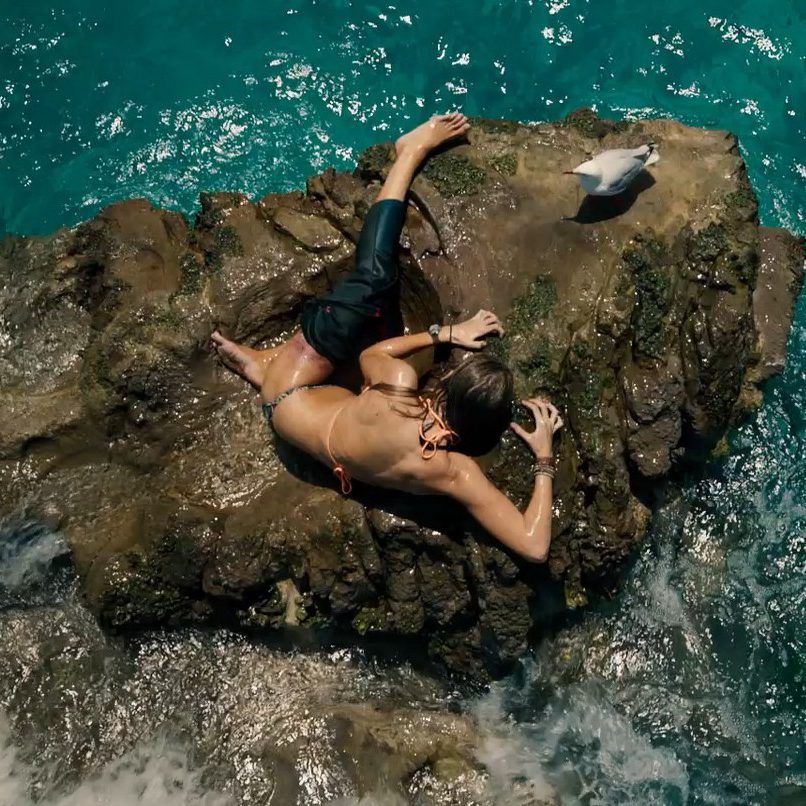 It’s imaginable that the worst part of being trapped out in the ocean, just 200 yards away from shore as a shark is circling you, might be the relative closeness of safety. Well, maybe the second worst part. But it’s a nightmare scenario in any case, knowing that everything you’ve ever known is just two football fields away and yet you’ve never been closer to death. It’s the conundrum and/or gimmick of The Shallows, Jaume Collet-Serra’s bottle thriller in a wide-open space. Surfer goes onto the rock. Rock is out in the water. Shark’s in the water. Her shark.

Nancy (Blake Lively) is stuck in the in-between in life, after a family tragedy saw her drop out of medical school and take to the adventures of the unknown. She’s a surfer, and seeks out a rare beach that her mother once told her about, to surf and forget her troubles for a while. (The film was shot in Australia, but takes place in Mexico.) For an afternoon, Nancy is in heaven. She surfs, she avoids the more irritable coral, she encounters some level of peace and unity with her world. But then it’s getting late, and Nancy decides to catch just one last wave. Birds are swarming on something, just a little further from shore. So she swims out, finds a mauled whale, and eventually collides head-on with a massive great white shark.

The early minutes of The Shallows suggest a slower-burning film, with the tension mounting and the faked jump scares arriving early and often. But once Nancy is toppled from her board and forced onto a rock that’ll only be available until the high tide in the morning, the film morphs with surprising ease into a stranded-tourist thriller pitting an endlessly resourceful woman with a propensity for swimming into hazardous rocks against what appears to be one of the hyper-intelligent great whites from Deep Blue Sea. The shark’s fin and silhouette are massive, and Collet-Serra mines the size disparity as frequently as possible, framing Lively as a very small speck in a very large ocean, one prowled by something she has no realistic chance against.

And yet, she finds it in her to fight back. The Shallows is an effective B-movie thriller, and this is owed in no small part to Lively, who manages to deliver a woman-in-peril turn that’s equal parts magnetic and unexpectedly deadpan. With his previous feature Orphan, Collet-Serra proved himself adept at teasing out the right sort of campy, exploitative notes within the lower-budget studio thriller. Here he finds a protagonist in Lively’s Nancy who can measure the gravity and increasing severity of her situation with an exhausted, are you fucking kidding me? resignation that comes off as unintentionally funny at first, but emerges as a slyly in-on-it performance on the actress’ part. It’s a leading role in the truest sense, because this is decidedly not a film that could work for any actor.

The film’s belief in and commitment to the simplicity of its premise takes it a lot farther than it might otherwise go. The Shallows is ridiculous by a number of measures, from Nancy’s tendency to explain key plot points aloud to nobody but a seagull she befriends on her rock (“Steven” Seagull, playing himself, and yes that is absolutely in the end credits) to the film’s tendency to amp up the drama by having Nancy continually hurt herself. But unlike a number of thrillers of its ilk, in which the protagonists keep the drama moving ahead by making an escalating series of horrible decisions, Nancy is a sharp mind with an uncanny (and convenient!) knowledge of how to treat and dress massive leg wounds, and The Shallows wisely mines its drama not from her stupidity, but instead from the inherent and massive disadvantage she’s left at. It also mines that drama from a shark that appears to be going to great lengths to stalk her, specifically, but who’s to say it doesn’t happen?

That said, the drama eventually turns for the patently absurd, particularly in a late-game blitz of activity that involves a fantastic answer to the castaway drama question of “what if the tools at your disposal can’t actually help you?” Because the film clocks in at a tight 80 minutes, there’s no need or time for extraneous drama. A subplot Nancy has about how she came to end up on this rock gives just enough to strengthen the character without wasting time, and it’s merciful given that Collet-Serra opts to work text overlays and FaceTime conversations into massive, screen-dominating fade-ins when they do happen. In its brevity and its right-side-of-corny tension, it’s the kind of quick, bloody, at times dubiously computer-animated feature in which studios don’t invest like they once did, and as they go, it’s an effective piece of nasty, occasionally science-defying genre filmmaking.

And if you care for thrillers that know how to take a moment or two to smirk at themselves, there are a handful of choice shots involving Lively’s massive adversary, and her battle maneuvers, that left the early screening audience cheering and howling. It’s the smartest dumb movie about a woman battling a great white you’ll see this year.