Growing Up with Don’t Tell Mom The Babysitter’s Dead 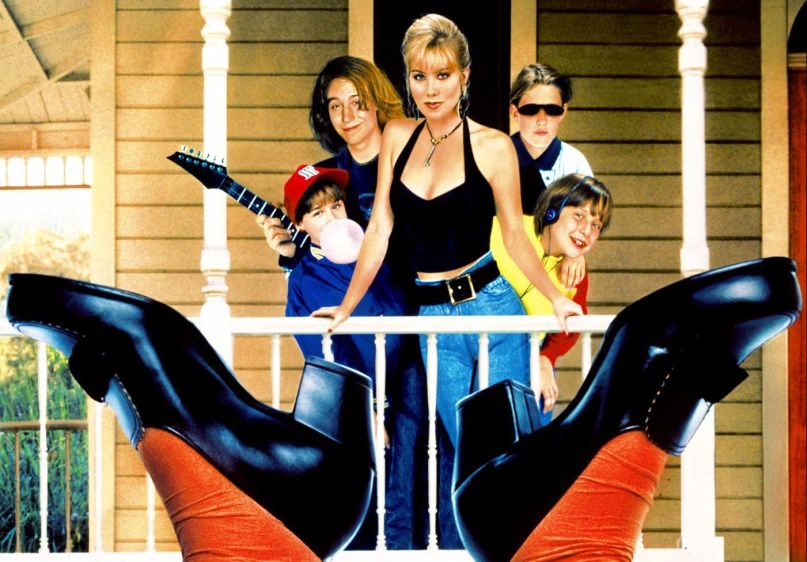 “Sue Ellen, every girl over 25 should have a cucumber in the house.” — Rose Lindsey (Joanna Cassidy)

Now there’s a line that goes way over your head at age six. Yet somehow I was instantly hooked on Christina Applegate’s cult classic, coming-of-age comedy Don’t Tell Mom the Babysitter’s Dead. Twenty-five years later, I can’t tell you how many times I’ve seen the damn film, which is probably a good thing because most of you would likely accuse me of hyperbole. Though, if I actually was tasked to throw out an honest estimate, it would probably be floating somewhere above 300 screenings.

Blame it on Blockbuster, sleepovers, college, or straight-up HBO, but Neil Landau and Tara Ison’s little movie about an older sister coming to grips with reality thanks to a crotchety old corpse has really stuck with me all these years. Much of this has to do with the fact that it’s 102 minutes of yummy comfort food — escapist fiction for idiots like me who love wasting afternoons rooting for Sue Ellen (“I’m right on top of that, Rose”) or shaking their heads at Josh Charles (“I am the stork of fast food”).

But really, there’s a genuine, captivating innocence to Don’t Tell Mom the Babysitter’s Dead. Sure, it’s technically an artifact from the ’90s, but when you sit down and watch it, the film never feels like it’s from that decade. Rather, there’s an indistinguishable aura to the comedy that places it in this bizarre limbo between the ’80s and ’90s, before the former decade had died off and the latter had figured itself out. It was too cynical for the Reagan age, but also too hopeful for Bush’s days.

Having said that, Don’t Tell Mom the Babysitter’s Dead is pretty campy. Director Stephen Herek, who had previously helmed midnight classics like 1986’s Critters and 1989’s Bill & Ted’s Excellent Adventure, embraced the B-movie title by sprinkling the film with shards of his then-trademark brand of surrealism. When the late Eda Reiss Merin’s terrifying babysitter hijacks the entire household, for instance, it feels like an outlandish Spümcø animated short. That’s not exactly a bad thing.

These quirky additions allow the film to have a little fun tonally, which explains why we almost don’t bat an eye when a gang of carjacking drag queens rob the Crandell’s blind. It’s a little left field, sure, but we also just witnessed the kids drop off a fresh corpse in front of a morgue and peel out as if nothing happened. This roller coaster style of storytelling is what makes the film such a unique experience or, as John Waters might argue, why a little camp goes a long way.

Still, it’s not at all surprising that the movie didn’t find an audience upon its initial release on June 7, 1991. Critics panned it — even Rolling Stone’s Peter “Four Stars” Travers, who wrote, “Blame the smash of Home Alone for the new herd of kids-on-the-loose movies. Let’s hope none are dumber than this one.” — and audiences simply ignored it, as the film’s paltry $4 mil opening weekend gross proved. Naturally, as most cult classics are wont to do, it scored big on home video.

Although I was only six years old (six and three-quarters, to be sure), I was one of the few moviegoers who saw the film in theaters. At the time, I worshipped my older cousin and adored being the little kid among her older, attractive friends, so they dragged me along one night to see it. In hindsight, talk of cucumbers were the least confusing bits of dialogue going down on screen for me, but I understood the concept of babysitters and the responsibilities of being on your own.

Less than a year prior, my younger (and only) brother was born — hey, Phillip — and it was a very bewildering time in the not-so-friendly Roffman household. My parents’ marriage was on the fritz, leading to some entertaining fights every other night, and I couldn’t exactly run off and hold up at Lizard’s like Keith Coogan’s rebellious Kenny. So, there were a lot of times I’d have to care for my brother, a natural part of my life that only progressed over the years as we both grew up together.

Watching Sue Ellen struggle and learn to keep things together for her four siblings certainly hit home for me. Maybe not in the theaters, but as the film became a standard for cable television, I came to recognize it less as a screwball comedy and more as a parable rich with timeless life lessons. Now, that may sound pretty asinine given its lewd title — to be fair, it was originally called The Real World — but when you really parse out the story and the themes, there’s so much to glean.

Landau and Ison’s unassuming screenplay weaves in a lot of subtle and not-so-subtle commentary about growing up. Of course, the ultimate pitch is toward kids who often dream of ruling the roost themselves, but the real beauty of the story is Sue Ellen’s first-hand experiences at adulthood. Office politics, industry jargon, and destitution are but a few of the many troubles lodged at the would-be twentysomething, and the film never lets up on the idea that the struggle is very real.

As Applegate told Buzzfeed last year, “I think people could really relate to Sue Ellen. She was kind of pissed off, she was not doing great in school, not participating in her family so much; she was relatable to a lot of teenagers who feel like the burden of the world is on them. They’re so dramatic about everything and I think in her success, there’s hope.” She added, “These characters give kids hope and I think that’s thematically what you walk away from it believing and sensing and seeing.”

She’s not wrong. Each character in the Crandell household serves a purpose. While Sue Ellen navigates the nasty waters of corporate America, warding off competition and sexual harassment, her brothers and sisters also learn a thing or two. Look no further than Coogan’s metal-loving troublemaker Kenny, a total bastard that refuses to help out, that is until he sobers up, stops cleaning the dishes with firearms, and recognizes the delegation of family roles. He even whisks the couch!

Everyone comes to terms with their own vices, and they’re all very palpable conclusions. Hell, I’d like to think I never risked breaking an arm after watching Walter fall from the roof while trying to obsessively fix the TV antenna. Or that I’ve always been wary of being too extravagant with crushes after seeing Zach lose a diamond ring to his moon goddess, Cynthia. Nowadays, I sympathize with Rose, a desperate employer scrambling for M&Ms. Shoot me if I ever align with Gus. Woof.

Looking ahead, it’ll be interesting to see how Don’t Tell Mom the Babysitter’s Dead endures as streaming takes over standard programming. Part of the film’s charm has been catching it on TV at random over the years, something even the stars are hip to, as Coogan recently admitted: “We never allowed people to become nostalgic for it because it never stopped playing on HBO. I think replaying it always on cable is what really kept it going.” Eventually, nostalgia will be the only thing keeping it from being buried six feet under, but even on that day, most will agree: She was a great babysitter.