The musical comedy trio speak to the creative process behind Popstar 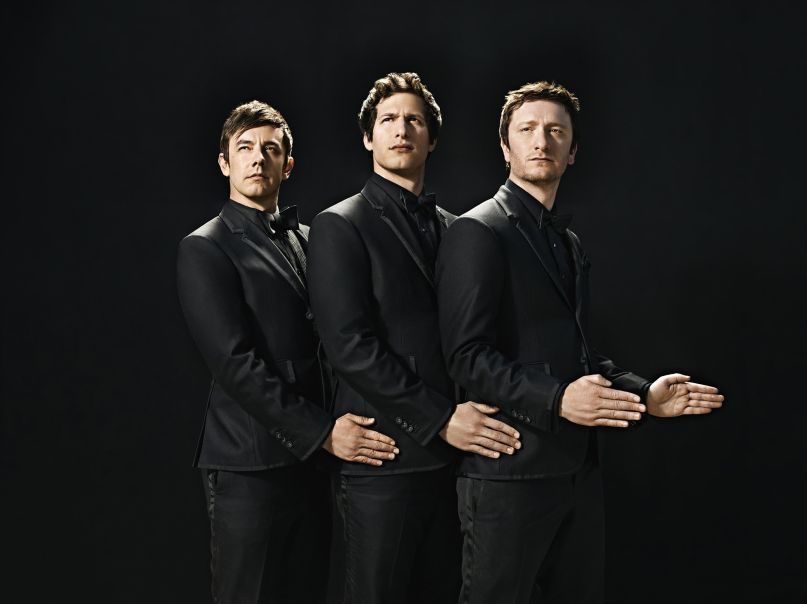 It’s been over a decade since The Lonely Island dropped “Lazy Sunday”, a rap video about cupcakes and Narnia that revitalized Saturday Night Live and inadvertently helped launch the YouTube platform.

In the years since, the trio of Andy Samberg, Jorma Taccone, and Akiva Schaffer has kept busy, releasing three albums under the Lonely Island moniker and separately appearing in a slew of films, television programs, and SNL cameos. On Friday, they’ll release Popstar: Never Stop Never Stopping, their second film following 2007 cult classic Hot Rod and perhaps their biggest undertaking to date.

Popstar focuses on Conner4real, an artist of the Justin Bieber ilk who has left his group, The Style Boyz, behind to work on a solo career. The film follows Conner as he readies the launch of Connquest, his sophomore album. Samberg stars as Conner, while Taccone and Schaffer play Owen and Lawrence, the other members of The Style Boyz that now work as Conner’s oft-demeaned DJ and a rural farmer, respectively.

The film is full of everything fans of The Lonely Island have come to expect from the group: catchy songs that revel in mocking ignorance, plenty of cameos from top-notch musicians and comedians, and all the dick jokes you can handle.

Speaking with all three members of The Lonely Island by phone from New York City, they reveal that the source material for Popstar was a mix of everything from Justin Bieber’s 2011 tour documentary, Never Say Never, to mid-2000s MTV shows like Diary (the one where each episode starts with the self-important voiceover, “You think you know, but you have no idea”).

“We were getting ideas from everywhere,” says Taccone. “We were even watching people’s tour documentaries that aren’t really documentaries exactly, but like, Wiz Khalifa’s shoots with his friends on tour and what their tour is like. We were just ingesting all of that stuff.”

The film, which all three wrote and which Taccone and Schaffer co-directed, is a very different beast from the Saturday Night Live digital shorts the group is best known for. Classics like “Dick in a Box” and “I’m on a Boat” were always made the week of the episode they aired on, a process that often resulted in late nights and rapid turnarounds. The group returned to SNL on May 21 with a new digital short, which also serves as the music video for Conner4Real’s Connquest single, “Finest Girl”.

The song, which features lines like, “She wanted to fuck me harder than the US government fucked Bin Laden,” is peak Lonely Island, a song about the military ethics of Osama Bin Laden’s assassination dressed up as a club banger about getting down.

“We were right back into that zone,” says Taccone of the experience. “We shot it all on Thursday and edited on Friday.”

Schaffer compares the experience of grinding out weekly digital short videos to the “24-hour film challenges” that now take place across the world.

Most seem to agree that the results speak overwhelmingly for the former. Comedy juggernaut Judd Apatow came aboard the Popstar project before there was even a script, and the film itself is a veritable red carpet of the music industry’s biggest names, many of whom have worked on past Lonely Island songs. While writing the script, Schaffer says they used real artists that they pulled out of a hat as placeholders, some of whom, like rapper Nas, ultimately appeared in the film. The cast also features many of the group’s Saturday Night Live chums, including Maya Rudolph as a representative for Aquaspin, an appliance company that agrees to program their products to play Conner’s new singles whenever the user opens their fridge or starts a load of laundry.

“When we first wrote the whole Aquaspin plot line,” Taccone remembers, “the whole U2/iTunes thing had not actually happened yet. We obviously have some sort of ability to predict the future.”

Another SNL alumnus who features prominently is Tim Meadows as Conner’s manager, a role that was written with him in mind.

“We have been admirers of his for so long,” admits Samberg. “We loved The Ladies Man and loved watching him on SNL, so we were just really excited that he was up for it.”

“He shows up in a lot of movies and is quietly the funniest thing in it,” adds Schaffer.

While there is little about The Lonely Island that could be considered “quiet,” they are definitely the funniest thing in Popstar, not only as their onscreen characters but as the creators of all the songs in the film. One of the many musical highlights is Conner’s single “Equal Rights”, which features a hook from Pink and plays off Macklemore’s “Same Love”. Ostensibly a song about marriage equality, in truth it exposes Conner’s own insecurities as he continually goes out of his way to mention that he’s not gay.

Schaffer says the conceit of writing songs for a character was “freeing, in a way. You knew there’d be this context to the songs, so they didn’t all have to stand alone exactly the same way a short would. Some of them could be more for story, and then some of the songs could stand alone completely.”

Popstar is perhaps an extension of this idea, a narrative through which The Lonely Island can continue their hilarious and subtly profound examination of our culture’s most glaring flaws. Just as the film delivers a solid base of plot and characters capable of withstanding the swift onslaught of jokes that fill its 86-minute runtime, the quality of the music has allowed the trio to write about a treasure trove of ridiculous subjects.

“[Adam] Sandler, “Weird Al,” Spinal Tap, Tenacious D, [Flight of the] Conchords,” says Samberg, “those are all folks we consider kindred spirits, and they all do that: make nice-sounding music so then the comedy is much funnier because of it.”

As for Popstar, the group seems grateful they’ve found the success necessary to turn what amounts to their fourth album into a full-blown feature film. One thing’s for sure: It’s a far cry from their days making shorts at SNL.

“We got to edit this for seven-and-a-half months as opposed to 15 hours,” says Taccone.

“You get way more time to formulate the story and make sure it’s to your liking,” adds Samberg. “There’s no stone left unturned, which is a much more satisfying creative experience.”