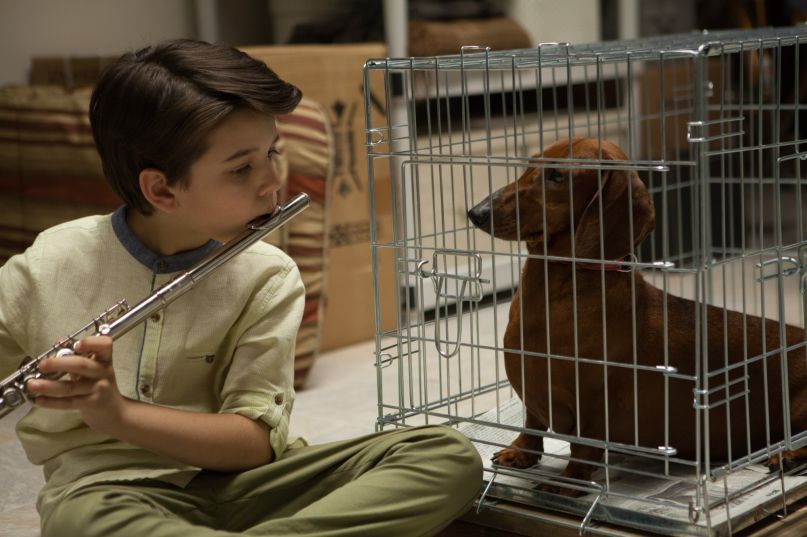 The following review was originally published as part of our coverage of the Sundance Film Festival 2016.

“Everything has a beginning, and everything has an end.” This is one of many sobering life lessons we learn over time, but one we traditionally never grasp until it’s too late. It’s also the crux of Todd Solondz’s latest cutthroat comedy, Wiener-Dog, a varied collection of quirky stories that meditate on the breathless march toward our respective graves.

The 56-year-old cult filmmaker, who smashed independent cinema to pieces over 20 years ago with 1995’s Welcome to the Dollhouse, offers a sardonic twist on mortality through the sordid adventures of an adorable dachshund. For 90 minutes, the titular pooch takes us to four very depressing corners of America that surprise us with their unlikely humor.

Admittedly, the dog’s an all-too-easy medium for an anthology film — we all remember Cat’s Eye, right? — but the canine speaks more to Solondz’s cynical insistence to pander to his audience. After all, everyone loves dogs — they’re adorable! They do human things! They’re funny! If this film’s campy intermission doesn’t clue you in, rest assured, he’s in on the joke.

Yet there’s something wildly emblematic about man’s best friend. A dog can provide a first lesson in death for youngsters, while also serving as a constant companion for those about to say goodbye. Solondz is hardly frugal with his concept, bookending the film with these two relationships, but he’s also not married to it, straying elsewhere in the middle to great effect.

What’s more, Solondz never compromises his respective stories. Even when the dog’s the central focus, as seen in the opening segment featuring Tracy Letts, Julie Delpy, and their precocious child, Keaton Nigel Cooke, we’re handed an ugly portrait of a dying marriage, one that can’t be saved by post-modern homes and European cars. That dog, though…

This subtle layering continues throughout, from the ensuing adventures of Dawn Wiener (Greta Gerwig) and Brandon McCarthy (Kieran Culkin) that touch upon dissipating memories and fresh starts, to the sad, aching, perishing career of Danny DeVito’s failed screenwriter-turned-teacher, Dave Schmerz, to the brisk conclusion alongside Ellen Burstyn’s bitter, regretful Nana.

Not all of it lands — revisiting Welcome to the Dollhouse’s Wiener and McCarthy feels a tad perfunctory, even if there’s a touching twist halfway through — but the film’s varied enough to coast along comfortably. It’s also just really funny, and once more, Solondz works with a cast that’s familiar with his strange beats and wicked humor.

As expected, Letts absorbs the asshole father to perfection, and watching him fumble around with the dog outside (“Heel! Heel!”) or offer choice lessons to his son (“You have to break a dog…”) is comedy gold. It’s a small role, to be sure, but he sells it so much that we’re laughing even at his actions offscreen, like when he impatiently honks outside.

Elsewhere, Culkin injects some surprising pathos in the ever-terrible McCarthy, and his tearful exchange with his disabled brother Tommy (Connor Long) bruises in all the right ways. (Can he please get more dramatic roles?) Similar applause goes to DeVito, who delivers an impressive dramatic performance that’s old-school and endearing all the same.

It’s a shame we’re given so little time with Burstyn. Though, considering her unremarkable situation — she’s waited on hand and foot by an orderly in a faded pink shirt from The View, while her loser granddaughter (Zosia Mamet) drains her finances — that’s probably for the best. Still, the Oscar-winning veteran adds a stoic showing that’s quite effective.

Also effective is Solondz’s direction. This is a stylish film that prods with its garish tendencies and thrives from its heightened naturalism. There’s a dreary, hazy wash to the proceedings that falls in line with the somnambulant storytelling at hand. Few directors can turn a long tracking shot of messy diarrhea into a work of art, but alas, that’s what happens.

You’ll laugh, you’ll cringe, you’ll wince, and you’ll sigh. Such is the genius of Wiener-Dog, and of Solondz, and why he remains a reliable visionary. In lesser hands, this anthology would turn into another hopeless parallel to 1989’s New York Stories. Instead, it’s a balmy, addicting stroll through his not-so-delirious vision of America that charms just as much as it haunts.