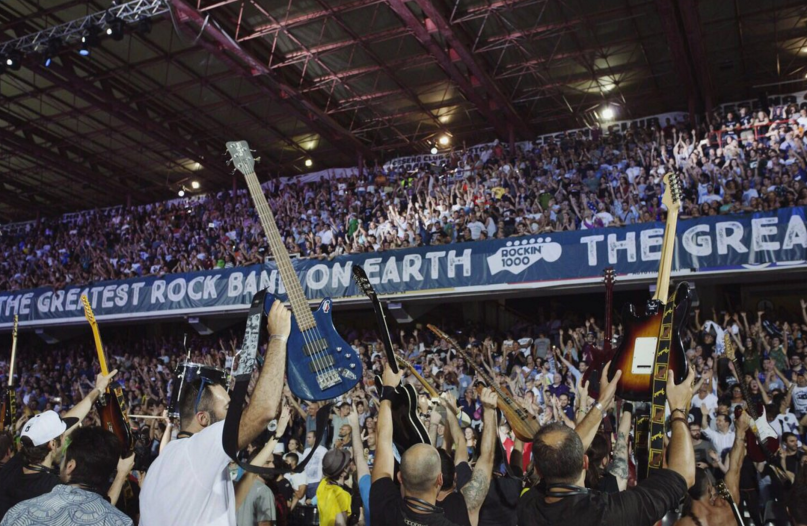 Last summer, the Italian city of Cesena brought us one of cooler music stories in recent memory. 1,000 musicians gathered together for a live performance of Foo Fighters’ “Learn to Fly” with the hope that it would compel the actual band to visit their fair city, population of 97,131. It worked, as Dave Grohl and co. made their way to Cesena in November 2015.

Last week, the horde of rockers — who refer to themselves “Rockin’1000”, even after adding 200 additional members — regrouped last week for a full-blown concert event during which they covered songs by The White Stripes (“Seven Nation Army”), David Bowie (“Rebel, Rebel”), Nirvana (“Smells Like Teen Spirit”), Blur (“Song #2), The Black Keys (“Gold on the Ceiling”), AC/DC (“It’s a Long Way to the Top (If You Wanna Rock ‘n’ Roll)”), The Beatles (“Come Together”), Patti Smith (“People Have the Power”), The Ramones (“Blitzkrieg Bop”), Steppenwolf (“Born to be Wild”), and The Verve (“Bittersweet Symphony”). There was even a medley of Jimi Hendrix and Led Zeppelin songs including “Purple Haze”, “Foxy Lady”, “Kashmir”, and “Whole Lotta Love”.

Check out footage of the performance below.

“Gold on the Ceiling”:

“People Have the Power”: