Scottish trio continue to charge ahead, but in a direction that challenges emotional payoff 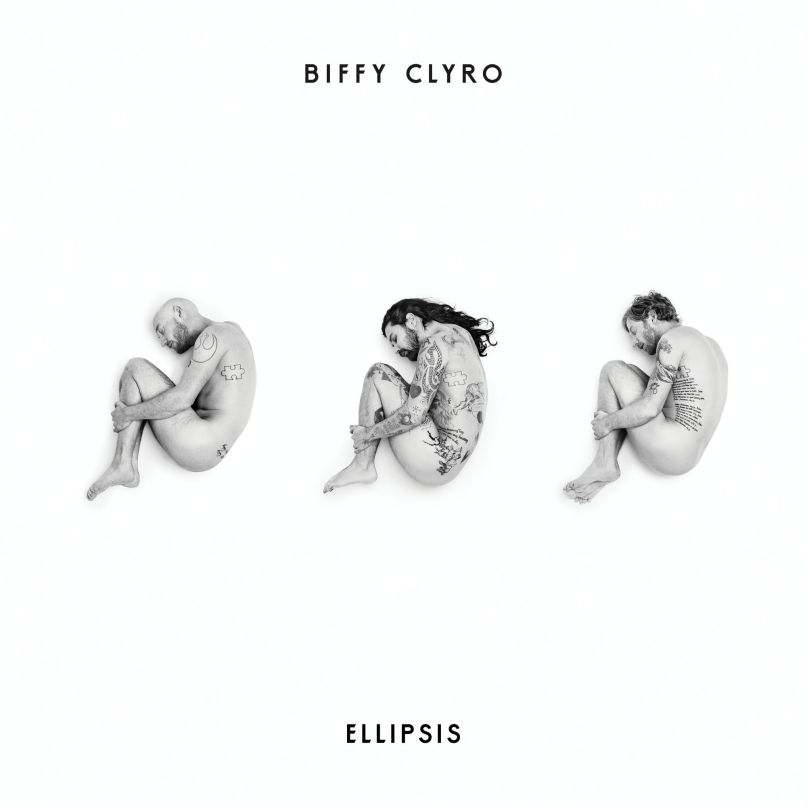 Biffy Clyro typically ease into their studio albums, slinking in with muted instrumentation that slowly amps up to explosions and declarations. Take a listen to the openers of Only Revolutions and Puzzle as examples. But the Scottish trio begin their seventh album, Ellipsis, on a different note: seconds of dialogue from the studio, where frontman Simon Neil exclaims, among echoing laughter, “Record this?!”

Neil’s disbelief is de-contextualised but understandable, considering how Biffy Clyro opted to work with Rich Costey on Ellipsis rather than longtime collaborator Garth Richardson. The trio feeds off Costey’s love of hip-hop (the band have cited A$AP Rocky, Kanye West, and Aesop Rock as inspirations for the record) and eagerness to “make things sound as fucked up as possible,” as they told NME.

But the studio snippet is also a knowing signal to the growing number of dubious Biffy fans alienated by the perceived mainstreaming of the band’s odd, proggy sound. As has been frequently noted, much of Biffy Clyro’s fanbase can be divided into pre-Puzzle diehards and post-Puzzle converts. The band’s social media pages swirl with comments lamenting the loss of Biffy’s edge. And so, the dialogue snippet is a wink and a nudge: “Hey, stay with us. Even we were surprised by how weird we got for this album.”

Unfortunately, it’s not very convincing, as the rest of Ellipsis bears out. It was once normal for the entirety of a Biffy Clyro album to be slightly off-kilter, even as recently as 2009’s Only Revolutions. But much of Ellipsis is comfortable, if not predictable. Biffy Clyro summon serious rage and power on “Wolves of Winter” and “Flammable”, yet in the end they remain perfectly serviceable but not particularly memorable rock songs. James Johnston’s energetic bass lines often pull Biffy Clyro songs out of this dull territory, but here he stays buried in the mix.

Although the album is antagonistic — Neil has characterized it as “fight rock, pint-in-the-face rock” — there’s no nerviness to Biffy Clyro’s rage. “We have achieved so much more than you possibly thought we could,” sings Neil on “Wolves of Winter”, positively brimming with pride. Much of Ellipsis was borne out of the frontman’s struggles with mental health, which explains its combative stance. But as a band, Biffy are no underdogs. They are festival headliners in the United Kingdom, and that indisputable position of prominence has influenced their sound. From the shimmering U2-esque guitar in the background of “Friends and Enemies” to the Muse-worthy solo on “Animal Style” (which is frankly conservative by Biffy Clyro standards), they recall their arena rock peers more than ever. Even the joyful, soaring “Howl”, which is to Ellipsis as “Walk” is to the Foo Fighters’ Wasting Light, is slightly hobbled by its dependence on whoa-ohs and background handclaps.

The only song where the stakes feel palpably high is “On a Bang”, which barrels ahead on Ben Johnston’s sharp drumming, a song with less regard for structure than the rest of Ellipsis. It calls back to the reckless, frenetic side of Puzzle, Infinity Land, and even Opposites‘ “Modern Magic Formula”. With “On a Bang”, Biffy seem to best fulfill the expectations set up by their cited hip-hop inspirations — as long as you disregard the tinkling flourishes that add a distracting sheen to the chorus.

Biffy Clyro have been more indulgent of their eclectic production tastes of late, relishing opportunities to expand their guitar-bass-drum configuration. But where Opposites at least prepared listeners for a mariachi band with the helpful song title “Spanish Radio”, here Biffy blindside with “Small Wishes”, a jaunty cut replete with bells and literal whistles, something akin to an attempt at Edward Sharpe and the Magnetic Zeros. Biffy Clyro have always had a sense of humor; “Bubbles” and “Born on a Horse” from Only Revolutions come to mind. The curious lyrics of “Small Wishes” (we meet a “lovesick” man who “stole our national thunder” and “the lizard [that] shit and held it under our nostrils”) are a breath of fresh air in an album bogged down with wolf imagery. But the track should ultimately have been saved for a B-side compilation.

The band take it down a notch with “Re-Arrange” and “Medicine”, acoustic songs in the long lineage of deeply felt ballads like “Machines” and “God and Satan”. Unfortunately, on the former, Neil fails to take advantage of his versatile and emotive voice, instead staying in the same upper register for the entirety and further weakening the already-bland song. The desperate, self-hating “Medicine”, on the other hand, denies the listener easy emotional payoff, and as such is an admirable entry for the Biffy ballad index. Clearly Biffy Clyro see themselves as strivers, a band that charges relentlessly forward. But at times, listeners might wonder if they’re headed in any interesting direction.

Essential Tracks: “Howl”, “On a Bang”, and “Friends and Enemies”