On their latest comeback album, iconic punks show they're (still) in no hurry to grow up 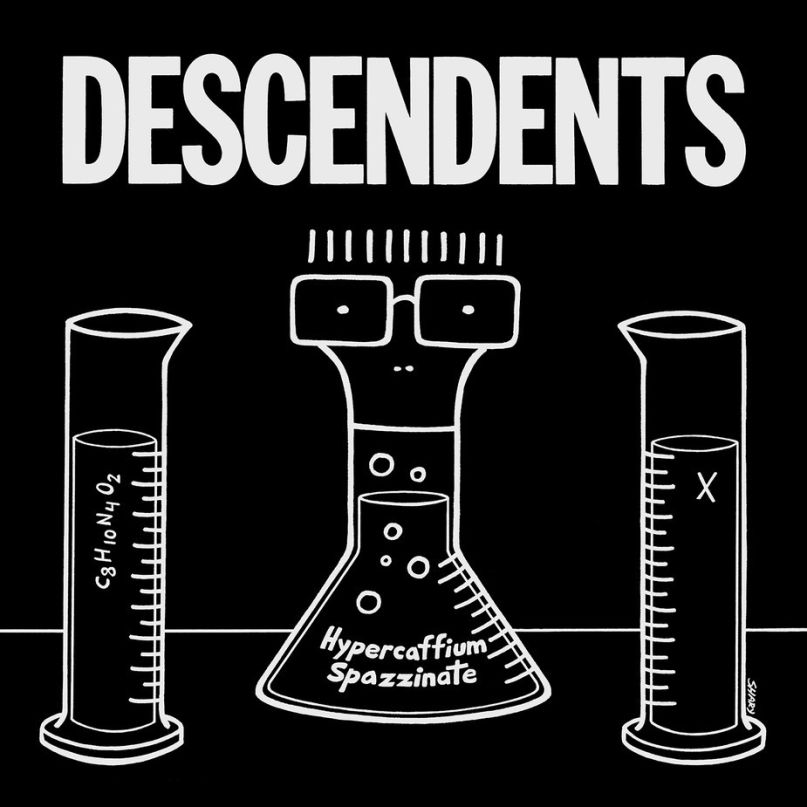 Though they started with a trip to college, nobody ever expected Descendents to grow up. The Peter Pan of punk bands has spat in the face of adulthood for nearly 40 years, penning snot-laced songs with titles such as “I Don’t Want To Grow Up” (1985) and “When I Get Old” (1996), the latter released when the members were already well into their 30s.

Now that bespectacled vocalist Milo Aukerman, drummer-songwriter Bill Stevenson, and their merry band of social misfits have returned with their fourth or fifth comeback album (honestly, it’s hard to keep track at this point), it seems appropriate that they would call it Hypercaffium Spazzinate. It’s a name that sounds overeducated but is really juvenile at heart, basking in the glory of stimulation without thinking too hard about the consequences.

Punk rock means a lot of different things to a lot of different people, but stimulation has always been a part of its core — strip away all the studs and safety pins, and you’ll find a genre of music focused on making you feel things. “I wanna feel this/ Gotta have to bear witness/ Gonna take pain straight the way I found it,” Aukerman sings on the chorus to album opener “Feel This”, celebrating sensation in and of itself as a sort of religious ritual. Descendents may shun the encroaching tide of years the way a vampire shuns the sunlight, but they’ve never refused to acknowledge that life is a joyous, fucked up boxing match, a delicious cup of coffee so hot that it scalds on the way down.

Like Everything Sucks and Cool to Be You before it, Hypercaffium Spazzinate showcases a version of Descendents that’s visibly but not audibly older. The group is no less energetic here than they were during their heyday, blasting off furious two-minute burners like “Victim of Me” and “Full Circle” (a song whose only chronological signifier is a reference to cell phone reception) while staying surprisingly light on their feet.

Fortunately, Descendents have grown up in some ways that matter. Rather than slap together some songs in the studio and simply call it a day, as they essentially did with 1985’s I Don’t Want To Grow Up, they’ve practiced patience and waited to arrive at 16 songs that feature either airtight pop melodies or a throwback to the fury of their early days. Never before have those two facets of the band’s personality merged so seamlessly on record, with straightforward hardcore anthems (“Testosterone”, “Human Being”) existing side-by-side with pure, unadulterated expressions of pop punk (“On Paper”, “Smile”). The songs here are notably tighter than on 2004’s Cool to Be You, which explains why they seem to linger in the memory even after just a few listens.

The funniest and most fascinating moments on Hypercaffium Spazzinate come when Descendents acknowledge their legacy and even take gentle jabs at themselves. “No Fat Burger” seems like a direct response to the band’s 1981 Fat EP, which celebrated greasy fast food excess with songs like “I Like Food” and “Weinerschnitzel”. This time around, Aukerman talks about trying to eat healthier in what’s probably the first hardcore song ever written about laying off the carbs and cholesterol.

Similarly, in album closer “Beyond the Music”, the band cheekily brand their sound as “frustrato-rock or chainsaw pop” before getting sincere and thanking music for giving them a lasting place and a community where they belong. In some ways it’s a callback to Everything Sucks closer “Thank You”, but it also looks forward to a future in which everything doesn’t suck. And why not? Because the music will always be there, fresh as ever, even as everything around it begins to decay.

Essential Tracks: “Victim of Me”, “No Fat Burger”, “Beyond The Music”