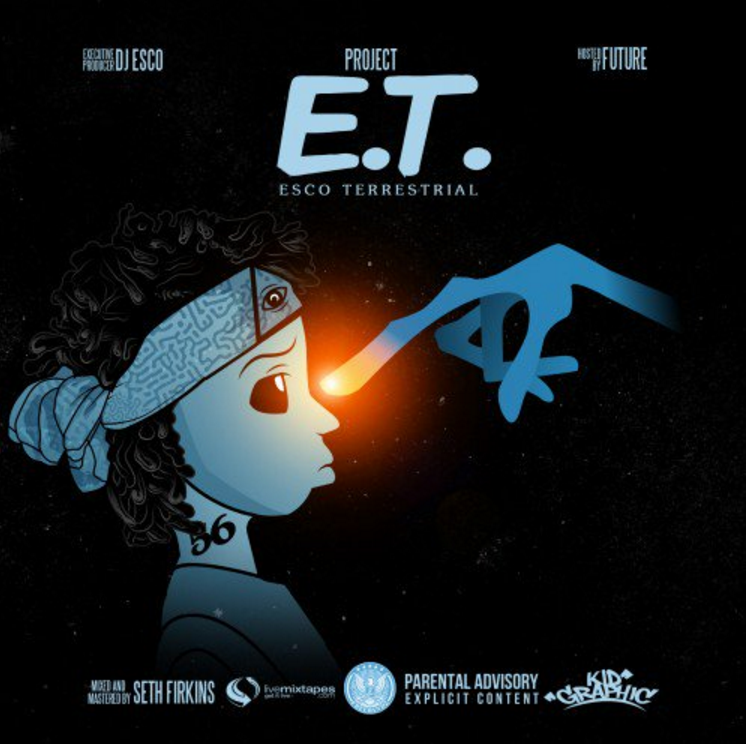 Future’s new Rolling Stone cover comes at a time when some fans are wondering if his legendary hot streak is actually coming to an end. That roll began with 2014’s Monster mixtape and has continued for the Atlanta rapper ever since. Future has gone from making regional street hits to making hits, period. Last summer’s DS2, the sequel to his breakthrough 2011 mixtape, cemented his bona fide rap stardom, selling 126,000 copies in its first week. He’s debuted new fan-favorite songs in 2016, too: “Wicked”, “Inside the Mattress”, and “Perkys Calling”, among others. His star, however, is no longer rising like it was this time last year. The rap world already projects others with bigger years in 2016, maybe even Future disciple Desiigner.

Project E.T.: Esco Terrestrial, executive produced by DJ Esco and hosted by Future, is not to be mistaken for a proper Future release. It moves along as something like a mixtape of Future duets for its first 10 tracks, featuring Drake, 2 Chainz, Juicy J, Philly’s on-fire Lil Uzi Vert, and both Rae Sremmurd brothers. On the 11th track, it becomes something else, with Future getting credited on just three of the remaining six songs. That’s where tracks are given to Casey Veggies and Nef the Pharaoh (“Stupidly Crazy”), Rambo So Weird (“Super Dumb”), and Stuey Rock (“Deal Wit It”). Overall, it’s an Atlanta-centric tape, with production coming in the form of 808 Mafia’s menacing lurch and Zaytoven’s reliable piano keys. Then again, Veggies and Nef’s sun-crisped West Coast outlier (“Stupidly Crazy”) is one of the most replayable songs here.

As for Future’s songs, many have at least one guest feature, and the guests on those tend to be as integral as Future. New Future songs are coming so fast that they don’t sink in right away, probably because you still have old ones stuck in your head. Inevitably, some Project E.T. songs will become huge the same way Low Life” has over the course of 2016. The thunderous “Check on Me” is the best of Future’s solo cuts here, a baller’s anthem that balances a repetitive hook and Future’s direct rapping to mesmerizing effect. “100it Bands” is the most popular song on the tape so far, but not just because it has Drake and 2 Chainz cameos; there’s also Future’s supremely catchy mumble of a hook. “Who” features Young Thug, and the song is a good example of why we should want to see chemistry between Future and his former rival rather than tension.

The guests are particularly important to Project E.T. because lyrically, Future is getting more and more redundant when he’s by himself. He’s also getting “more callous,” a pattern Sheldon Pearce pointed out in his CoS review of February’s EVOL. Instead of lamenting his depression, he’s now partaking in his many vices with reckless abandon. Future chronicles a seemingly permanent state of high-as-fuck-ness, one fueled by weed, molly, lean, Xanax, Percocet, Vicodin, Adderall … you name it. He’s sex-obsessed, but usually unattached to the women he sleeps with. You already know this. Do we really need a new Future song that goes, “Ratchet ass bitch, I’m tryna fuck you right now/ Thotty ass bitch, I’m tryna smash you right now”? There are only so many ways to talk about the same subject matter, and despite how much pleasure Future supposedly takes in his wickedness, he can sound bored at times.

It’s the final third of the tape where other rappers get a chance to shine. Again, Veggies and Nef’s “Stupidly Crazy” is a standout, one of the best songs either rapper has produced. The virtually unknown Rambo So Weird gets his big break on “Super Dumb”, with a fantastically strange, honking delivery that somehow brings to mind both James Brown and Fetty Wap. St. Louis native Stuey Rock gets his turn on “Deal Wit It”, an ecstatic, singsong banger. DJ Esco has mainly been known for his friendship with Future so far, but these songs show where he could be headed with his circle of collaborators. As a Future release, Project E.T. is inessential compared to 56 Nights, DS2, or even EVOL. Even if a little lacking, it’s better as a meeting of many of rap’s major players and a few of its freshest newcomers.