Way Yes founder strikes out on his own for a gloriously weird, weirdly glorious debut record 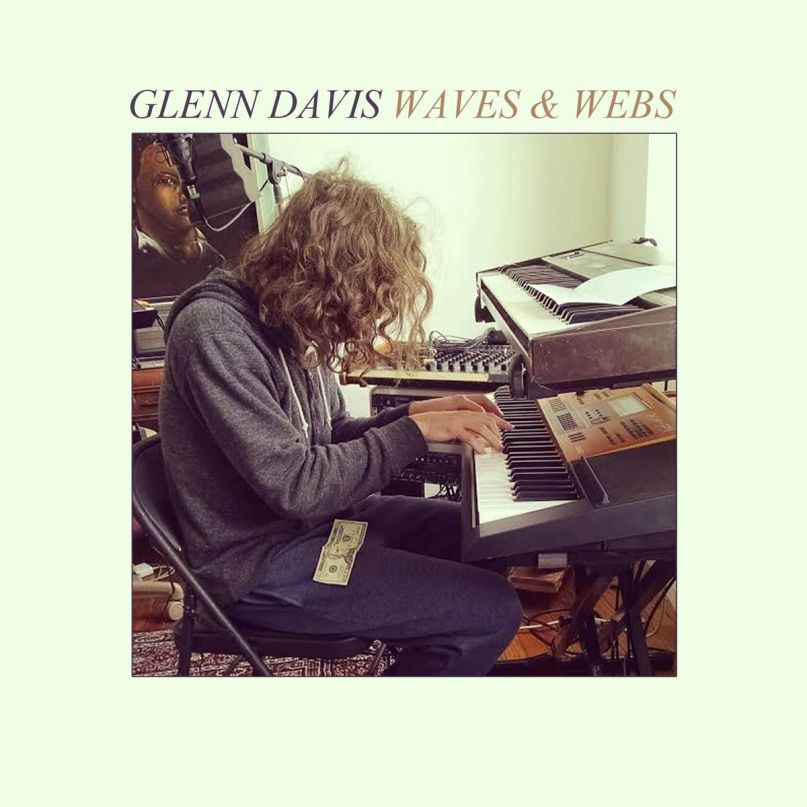 Glenn Davis, founder of Columbus, Ohio outfit Way Yes, is only being honest. On the opening track from his debut solo record, Waves & Webs, he warbles in his unmistakable baritone, “Say what you mean to say.” Such circular logic lies at the bottom of all discourse regarding forthrightness. If we only knew the nature of meaning, the essence of truth, perhaps saying what one means would be less complex. If only we could escape our own sense perception, perhaps we could see more rightly. On track three, a lightning strike hook set against downstroke guitars, Davis sings, “Be honest, but if only it’s something I want to hear,” a winking nod to the way truth collides with the subjective.

Davis wrote Waves & Webs in the wake of his failing marriage, an event that he weaves in and out of the songs with varying degrees of explicitness. The slow-driving ballad “Come Back” features a chorus that says as much. The sadness is counterpoised with bunches of hooks and taut pop constructions. Even on the lachrymose “Come Back”, he hits the listener with an overdriven key change in the final chorus. The irony of using pop’s best trope to work through such devastating lyrics begins to explain some of the power of Waves & Webs. “Every song is a slow song/ Every song could be slowed down a little more/ Could be sadder with a minor chord/ To me every song is a love song,” he sings on “Every Song”, both with and without irony. The record is abject sadness set to bubblegum hooks, a juxtaposition Davis either delights in or can’t escape. Perhaps a cocktail of emotion and response is as close to objective truth as we — and he — can get.

Davis seems interested in convergences of all kinds. Waves & Webs draws from many corners of pop geography. R&B inflections find their way in on the silky “Tipping Point” and the glittering “Super Tough”, among others. Drum loops and keyboard progressions dance in sequence, a white boy from Ohio fascinated by the power of slinky R&B arrangements, another pleasant disjoint.

The earworms are buried everywhere, and you’ll find yourself singing along with the darkest parts of Davis’ recent romantic history. “Run Your Course” could fit a mid-’90s middle school slow-dance, which generates plenty of pleasant nostalgia until you consider the terrible implications of the title. Even if we believe Davis when he sings “every song is a love song,” “Run Your Course” implies love is a disease, best left to its own devices. Maybe it kills you; you’ll still coo along with the eponymous hook. Quite simply, Waves & Webs is an incredibly satisfying record, even when its pleasures are unexpected, disquieting. It’s gloriously weird, weirdly glorious.

The spare, acoustic “Say Something” follows a familiar arc: Davis setting up in medias res, having his one- way conversations with his now departed partner. We know how the story ends — they don’t make it — and the power of hindsight is crushing, as Davis sings, “I’m willing to get down on my knees/ What can I do to make you see/ You belong with me.” We don’t know what Davis did, but whatever it was, it wasn’t enough. He returns to the truth problem: “Say something/ Be real/ Say whatever it is that you feel,” he sings, grabbing at the objective with his subjectivity. We don’t know what she couldn’t say, but, whatever it was, she couldn’t say it.

Ultimately, in Davis’ world, it’s an honesty problem, a truth in itself. The record confronts such absences with forthrightness. The worst bits are here — pain you can slow dance to. Maybe, if we’re being honest, Davis is right: All songs are love songs.

Essential Tracks: “Off The Line”, “Be Honest”, and “How They Used To Be”