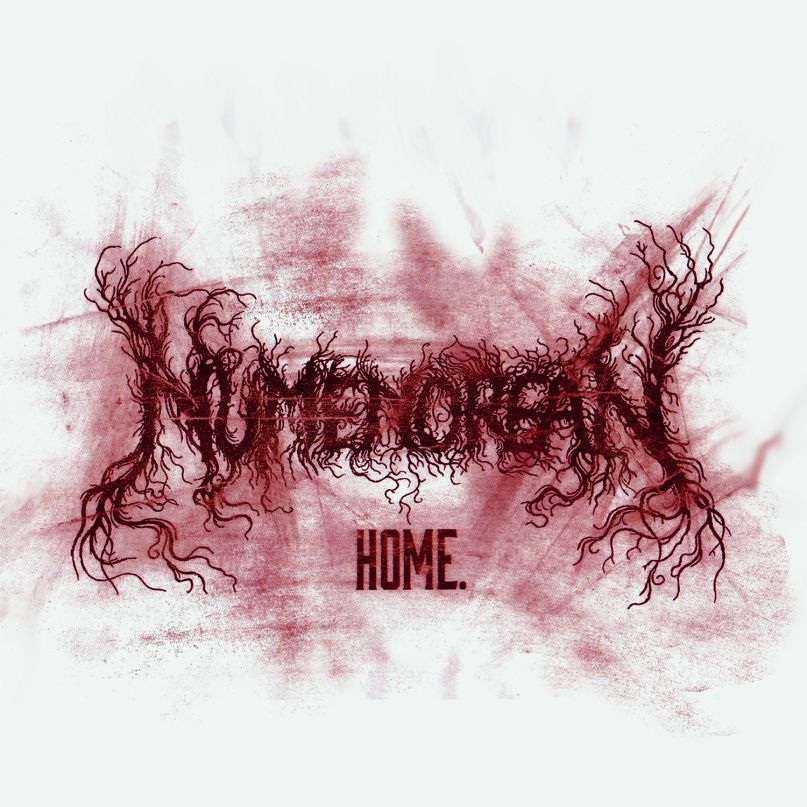 Numenorean are about to turn a lot of heads. Where their post-black metal counterparts chose to adorn the covers of their albums with bright colors and stylized type, recreations of space age memories, or surrealist photography, the Calgary-based band have picked something much more striking. With a warning to readers that the following image might be upsetting, we’ve linked to the intended album art for Numenorean’s debut album Home here. Outside of potential shock value, the photo finds its meaning well within the record’s declared purpose. Conceptually, the album writhes among our innate longing for a return to a childlike innocence, which you can nearly see on the bloodied young girl’s face. As the band writes in a statement, despite the violence and tragedy of her death, she “doesn’t have to go through all the pain and sorrow of becoming an adult.” Meanwhile, Numenorean invite listeners (i.e., those that have remained existing) to observe and reflect upon what’s been lost as time goes on.

Staying true to this philosophy from the start, the first track begins with a sense overwhelming anguish as a woman sobs. Speculation might direct listeners to attribute the sobs to a mother in mourning or, more broadly, someone overcome with all that life has given them. From there, spaced guitars briefly lead further into a place of mediation where lies a final struggle for the will to live. Here are introduced the desperate and strained vocals of brothers Byron and Brandon Lemley, whose voices interweave throughout the record to form its ironclad philosophy that, as they say on “Home”, “There is no comfort.”

Despite all this despair, the warm characteristics that have become trademarks of post-black metal persist. Bright power chords soar above blazing white, with drummer David Harrocks’ blast beats matching at a blistering speed. Post-rock interludes offer moments of self-reflection throughout the album as well. Narrated by thoughtful and ethereal picking, these moments aid in accepting and greeting the abyss from which Numenorean’s music screams back. Going in and out like an infinite tide, Home’s power comes from the insurmountable waves of howls and riffs that suddenly supplant the sublime instrumentals. This can best be experienced sequentially in “Shoreless” and “Devour”, where the former’s contemplative, reverb-heavy instrumental is given purpose just as soon as it is dashed upon the rocks of the latter.

Finding comfort in the quest for the innately familiar is a purpose well fulfilled on this record, but it also serves as a hindrance. The focus is so singular on Home that the band sounds apprehensive to break from the established format. The post-black metal tropes become too familiar by the second half, and there aren’t many surprises left. The band establishes a modus operandi on the first track and remains there for the rest of the record. Of course, maintaining a narrow focus can be a powerful choice, but the album’s journey is somewhat lost in the stagnation. The ideal experience can be found through reading the band’s brief manifesto while listening to the album front-to-back and meditating on the ideas put forward by the band. And yes, this would include looking at the album cover for a time.

Keep looking and listening, though, because in such morbidity, a sort of peace can be found. The young girl is forever innocent in the minds of those that remember her, and she has avoided whatever anguish she might have faced. She is at peace, unlike the rest of us who will never find that kind of innocence and peace again until our respective demises. Until then, we’re charged to live a life worth living because it’s likely not worth anything in the end apart from the cherished memories of those who knew us. It’s fascinating that Numenorean brings us out of our comfort zones in order to aid us in finding a better one. Through a meditation on life’s turmoils, the band leads a valiant effort to guide listeners nearer to a sort of existential peace. It isn’t reached necessarily, but the door is at least opened. Controversial artwork aside, it’s an album that deserves further discussion for its admirable motives and thoughtful execution.