Are We Finally Ready to Do the Right Thing?

In the wake of recent tragedies, Spike Lee's film raises more relevant questions than ever 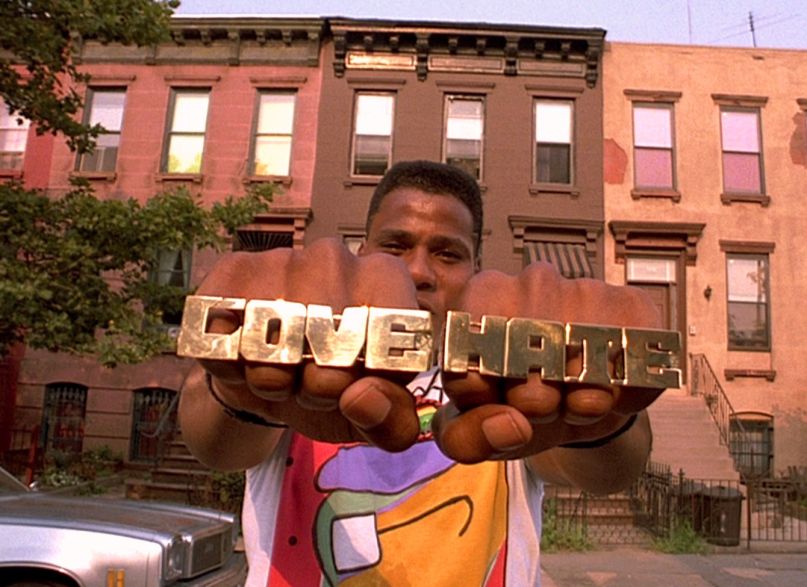 Music, Movies & Moods is a regular free-form column in which Matt Melis explores the cracks between where art and daily life meet.

I knew going into the theater last night that things would be different. How could they not be? I’d seen Spike Lee’s Do the Right Thing dozens of times, but never on a proper movie screen. And not since before hoodies and raised hands had become tragic symbols and police protests and Black Lives Matter hashtags had become culturally ubiquitous. And I certainly had never watched Lee’s racial pressure cooker a week after videos of two black men being killed by police – Alton Sterling and Philando Castile – had gone viral. By the time the movie’s tensions boiled over and the three white cops choked Radio Raheem outside Sal’s Famous Pizzeria, the scene felt like it never had to me before – all too familiar, all too real.

Of course, Lee went to great lengths to make his opus feel authentic. Do the Right Thing was actually filmed in Brooklyn’s Bedford-Stuyvesant neighborhood rather than on a remote Hollywood backlot. Condemned crack dens were vacated, set pieces were erected in vacant lots and as building fronts, and locals populated the neighborhood as extras. It’s a film made by, written by, and mostly starring blacks, yet its appeal has always stretched far beyond the black community. However, for many of Lee’s white fans, myself included, the movie’s opening credits might just as well be preceded by the words …in a galaxy far, far away. Only now that tragedies like last week’s seem so commonplace does Mookie’s “Bed-Stuy Do or Die” neighborhood begin to feel maybe not right outside our doors, but at least in our solar system.

For years white people have watched films like Do the Right Thing and listened to black music like outsiders peeking in through tinted windows. In some instances, art provides the preponderance of what we know about folks who don’t live among and look like us. In Signifying Rappers, late author David Foster Wallace describes this cultural eavesdropping as a train that passes through but never stops in black neighborhoods. Riders, in other words, can pluck the cultural fruits of the village without having to risk actual encounters with its natives. The safe distance this type of observation-deck scenario affords rarely gets mentioned in discussions about white privilege (yes, the ‘p’ word). And it extends beyond whites indulging in African American art. It’s why white people can learn of a tragedy in a black community on the news, feel genuine sympathy, and then return to normalcy in the span of a commercial break. Remoteness between peoples makes it possible to look away from plight and injustice — or at least put it out of mind.

That separation begins at birth and becomes all but permanent as children enter our public school systems. As a former “urban educator,” a euphemism that simply means one who teaches primarily non-white children, I’ve seen part of yet another generation of black and Hispanic students in Chicago shoulder the terrible afflictions that accompany segregation. I’ve also visited high school classrooms in some of the wealthiest school districts in the country, one a relatively short drive north of the city. Not only are the children of color where I taught receiving nothing like an equitable education, despite the passionate work of many dedicated teachers, but these two groups of young people are destined to grow up as complete strangers – each vaguely aware of the other but worlds apart. As Michael Eric Dyson wrote last week, “At birth, [whites] are given binoculars that see black life from a distance, never with the texture of intimacy.” They’re binoculars that, even on a clear day, cannot see into the classrooms, neighborhoods, and homes of my former students. And what we can’t see, we can soon condition ourselves to ignore and neglect.

And yet, amid all these systemic forces bent on separation, whites are starting to see with increasing clarity certain realities of black life too horrifying and tragic to ignore. Last week’s killings contained the type of chilling footage that should only ever be seen in movies. In the case of Castile, he slumped in agony live on Facebook, blood soaking through his white shirt as a panicked officer tried to rationalize what had just happened. These aren’t visuals one can easily dismiss, and they can’t help but make us reconsider much of the African American art we adopt as entertainment. In the current climate, Kendrick Lamar’s “Alright” isn’t just one of last year’s hottest tracks but an anthem of frustration, fear, and anger that continues to rally protesters. And even a nearly 30-year-old film like Do the Right Thing feels less like a stylized day in the life turned tragic and more like the Eric Garner story three decades before its time. African American artists have always used art to reflect harsh realities of black experience, but rarely have their most troubling narratives so disturbingly matched the national evening news.

Feeling frustrated and powerless, my eyes and mind were drawn to verbs during last night’s screening. Do the right thing. Fight the power. These are statements that call for action. As Public Enemy’s “Fight the Power” blares in full effect over the opening titles, Rosie Perez dances with unrelenting energy and determination. She wears bright red boxing gloves and a fighter’s robe in one sequence, shadowboxing with the camera, teeth clenched, snarling. Last night, it felt like you were either in her corner waiting to be tagged and come in swinging, or it was actually your chin she was trying to cave in. Meaning well and sympathizing from the cheap seats safely outside the ring is no longer enough – not that it ever was. Sitting idly by may not be the same as condoning, but with stakes so dire, what type of person settles for resignation without first throwing a few punches of their own?

“Always do the right thing,” Da Mayor tells Mookie. Of course, that advice is easier to give than follow. Is the right thing constant or a shifting target? Is it the same for everyone? A couple weeks ago, my father opted not to buy ice cream from the local Dairy Queen my family has patronized since I was a child. He made the decision after seeing a flier in the window promoting an NRA talk on the benefits of the AR-15 rifle, an event scheduled less than a month removed from a gunman with a similar weapon murdering 49 in an Orlando nightclub. For my father, taking his business elsewhere was doing the right thing. For others, it may have been talking to the establishment’s owner, convincing other customers to abstain, or perhaps even protesting at the upcoming NRA event. For some anonymous Chicagoans, doing the right thing was posting fliers in Logan Square a few weeks ago labeling Brock Turner — the Stanford swimmer recently sentenced to a criminally short six months for sexual assault — a rapist. For Diamond Reynolds, doing the right thing was live streaming her boyfriend, Castile, after he had been shot by policeman Jeronimo Yanez, a decision that may have protected her and her four-year-old daughter and one that further demonstrated the deadly consequences of our country’s unstable racial climate.

My own efforts to do the right thing have largely come as a teacher. I haven’t always succeeded. When students have brought names like Trayvon Martin, Michael Brown, and Tamir Rice into our classroom, I’ve sometimes spoken when I should’ve listened, not understanding that their experiences carried far more insight than the view through my white binoculars. Teaching taught me to speak when I am the authority and to listen and ask questions when I’m not — to make room for other voices. One of those other voices emailed me in March to tell me that he was accepted into a four-year university, a major victory coming from his school and neighborhood. In a few short months, he’ll be sharing classrooms with many students who only know about him via white binoculars, movies, and hip-hop songs. But they’ll share those classrooms all the same, and only in that way can familiarity and understanding between peoples begin to replace ignorance and fear.

One moment caught me entirely by surprise during last night’s screening. When Mookie hurled the trashcan through Sal’s window, scattered applause came from pockets around the theater. For some, Mookie was doing the right thing. In their minds, Sal’s pizzeria had to burn to the ground in recompense for what the police did to Radio Raheem. That reaction speaks to the power and relevance of Lee’s film. Nearly three decades later, Do the Right Thing still raises questions and asks audiences to try and piece together answers for themselves. After a week in which two black civilians and five policeman senselessly lost their lives, finding those answers has never felt more crucial.

And that’s the triple-truth, Ruth.