Looking back on the enduring legacy of the most useless, unreliable screwups of '90s film 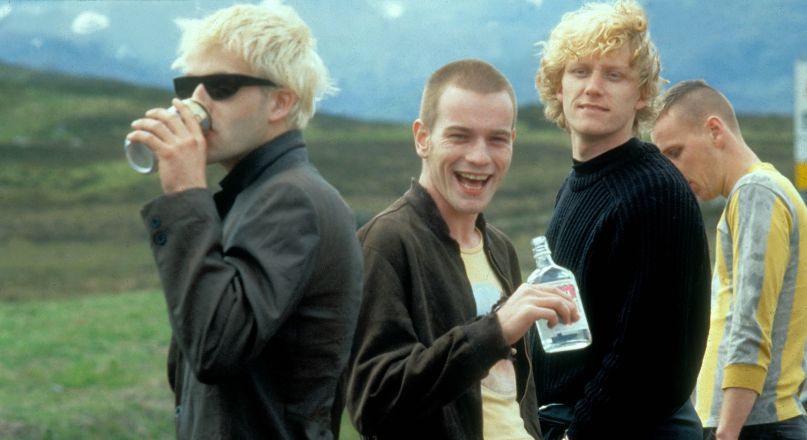 Dusting ‘Em Off is a rotating, free-form feature that revisits a classic album, film, or moment in pop-culture history. This week, Drew Fortune looks back at the legacy of Danny Boyle’s Trainspotting as its 20th anniversary sprints by.

Like a rollicking foot race to hell, the pounding drumbeat of Iggy Pop’s “Lust for Life” drops us straight into the world of Danny Boyle’s Trainspotting. It’s a drab, largely monochromatic Edinburgh, a decaying relic recalling the post-industrial blight that inspired Ian Curtis to rally against the drudgery of modern life, before it finally took his own. Hence, the nutters and scammers of Trainspotting, led by the anti-hero Renton (Ewan McGregor), the amiably dim Spud (Ewen Bremner), the slimy Sick Boy (Jonny Lee Miller), and the psychotic Begbie (Robert Carlyle) lust for their respective stimulations, whether that’s sex, wealth, violence, or their shared love (save for Begbie) of heroin. “Heroin’s got a great fucking personality,” muses Sick Boy before shooting up. What separates Trainspotting from so many of its ilk, especially the dour drug movies of the ’90s, is that it has a great fucking personality. You actually want to hang out with this crew, and that’s what makes it the best drug movie ever made.

The drug movie is a bit of a gray area, especially when substance use or abuse appears prominently (Dazed and Confused, Easy Rider) but plays a supporting role to a greater theme (coming-of-age/road movie). For the sake of argument, let’s call a drug movie anything where a narcotic and/or its addicts get top billing. Rattling off a quick list of titles that fit the bill: Requiem for a Dream, Drugstore Cowboy, The Panic in Needle Park, Spun, The Man With the Golden Arm, Fear and Loathing in Las Vegas, etc. This shouldn’t be confused with midnight or cult movies where you’re supposed to take drugs, like the pot cloud that commonly surrounds El Topo or Pink Flamingos. Trainspotting came along at a time when the AIDS scare had mutated into heroin mania. After the ’80s crack epidemic, heroin returned in a big fucking way in the ’90s, lending itself to the heroin chic of Pulp Fiction and the trend of dark-circled, pale-skinned fashion models. Into this bizarre fascination with the drug came Trainspotting, a film ultimately condemning heroin and fearing HIV, without forgetting the joys of narco-nirvana and, in its own jaundiced way, life itself.

Whereas drug movies, before and after, were almost always mired in doom and gloom, Trainspotting still feels like a mai-line shot of B12, a film pulsing with the rhythms and pleasures of lives lived outside of polite society. Consider Renton’s parents, a TV-Bingo-valium zombie couple. They laugh at inane television while informing their son that every chance he’s ever had, he’s blown it by stuffing his veins with that filth. But what they forget, as Renton informs the audience via his near-constant voiceover, is the pleasure. Boyle, working from a screenplay adapted by frequent future collaborator John Hodge from Irvine Welsh’s eponymous novel, remembers to have fun along the road to ruin.

In their off-time, Renton and company dance, guzzle milkshakes and take potshots at random passerby (and their poor dogs) with a BB gun. It’s not about mayhem, but about their insatiable lust for life, and their fever is infectious. Fun in drug movies is usually dopey and over-the-top (the “Macarena” supermarket dancing in Go, The Wolf of Wall Street‘s Quaalude crawl). It doesn’t seem like it would be much fun to hang out with Raoul Duke and the wolflike Dr. Gonzo as they vomit, wield knives and terrify their way through Vegas. Likewise, turning tricks in The Basketball Diaries and Less Than Zero makes the point and then wears it out, like Jerry Stahl spiking a neck vein in Permanent Midnight. But a night out with the boys of Trainspotting as they bounce about town, arguing the virtues of Sean Connery or musicians that “had it and then lost it,” would be the epitome of a night well lived.

Requiem for a Dream is the most honest drug film ever made, but that film takes gloom and desperation so far that I hardly know anyone willing to revisit Hubert Selby’s world twice. Trainspotting rewards those up for it upon frequent viewing, and its humor only grows richer. The first viewing is an aural and visceral thrill ride. The iconic soundtrack, most notably the heart-wrenching final strains of Underworld’s “Born Slippy”, and the infamous “ceiling baby” are most frequently the biggest takeaways. But upon repeat viewings, the film emerges as more of a buddy comedy than a shock-to-the-system, anti-drug film. Spud’s speed-addled job interview is a masterpiece of verbal dexterity. Begbie’s self-aggrandizing story of an epic billiards win, and the subsequently more truthful account provided by the doomed Tommy, is a brilliant piece of physical comedy.

The ecstasy of drug use can be handled with extreme clumsiness (Vinyl), or with a lovely touch, like the opiated bliss of Leonardo DiCaprio’s Jim Carroll running through a hyper-saturated flower field in The Basketball Diaries. Trainspotting’s “toilet” scene, where Renton metaphorically dives into the “worst toilet in Scotland” to retrieve opium suppositories, is scored by Brian Eno’s hypnotic “Deep Blue Day”. In his single-minded dope vision, and the resulting hallucination, Boyle and Hodge create one of the most iconic, and oddly, “true” visions of pure addiction. In Renton’s underwater adventure, surrounded by a brilliant sea of blue, Renton zeroes in on his targeted suppositories. But along the way, he swims past a spiked, underwater land mine before retrieving his prize. It’s the feeling of copping a gram just as a cop zooms past on another call. It’s the single-minded obsession of texting your dealer frantically, foregoing food, sex, or life until you finally get the green light to come over and score. Even Renton’s detox transcends the norm, avoiding the standard bleary street jonesing in favor of hallucinations and sickness in his childhood bed.

Trainspotting is ultimately about a lonely man surrounded by mates he has outgrown. As Renton fights to get clean and attempt a “straight” life, he is called back into the fray for one last scam. There’s a great moment, after the boys pull off a skag deal for a measly 16,000 pounds, when they all hug; they’re innocent kids again, who’ve just won the football game. But the moment cannot last, and that’s ultimately what elevates Trainspotting to the top of the drug movies list. It’s sad, because leaving the life and your buddies behind, is one of the hardest parts of sobriety. In a sideways-skewed view, the ending is uplifting, as Renton must escape his friends and everything he’s ever known to move forward. This requires ripping off his mates.

As Renton walks off into uncertainty, “Born Slippy” pulsing, his voiceover returns to the “Choose Life,” speech. Walking straight toward the camera, Renton’s face morphs into a surreal, creepy smile as he absorbs the frame. Informing the audience cheekily that he’s going to be “just like you,” we know that he will never fit into square society. He’s far too unique. He possesses too much lust for life. We’d like to think that he might be all right on his own weird path, as he’s “done with that sort of thing.” He also leaves a present for his only true friend, Spud. We’re left with a smile, as doom and gloom thankfully recede into the past. Cheers, boys.