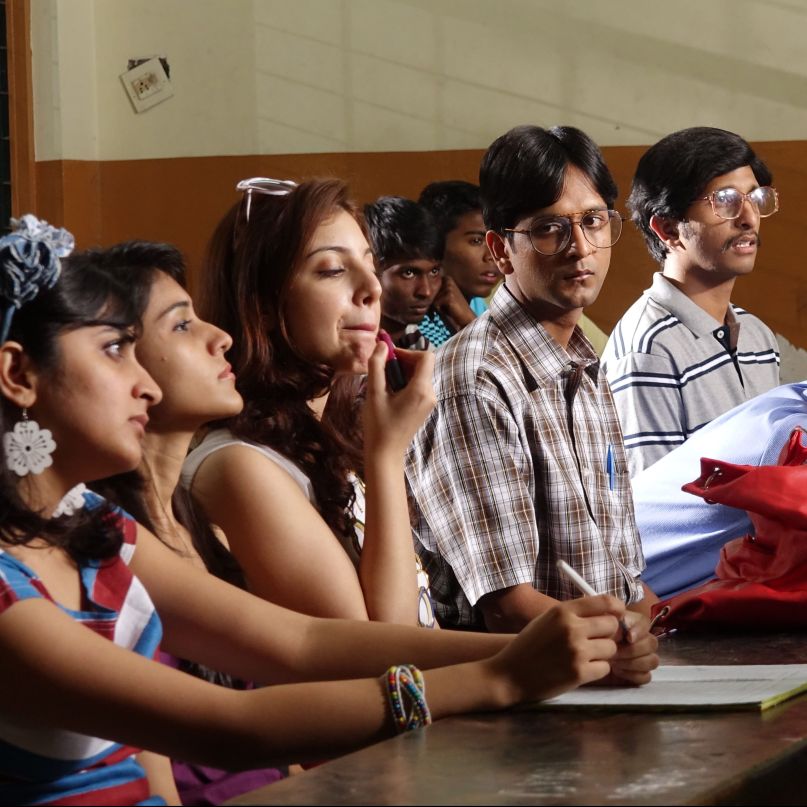 Brahman Naman is like a crispy Samosa with nothing at the center. The Netflix release, directed by Qaushiq Mukherjee, pays homage to American sex comedies from Porky’s and Revenge of the Nerds to There’s Something About Mary, but lacks the heart to go along with the excess of raunch.

Naman (Shashank Arora) is a budding quiz master who wears his intellect as a suit of armor; he  spends his days sharing bits of random information (did you know Joyce used “feck” to mean “steal” in Portrait of the Artist?) and sexual trivia with his teammates, Ajay, Ramu, and Randy. Naman and his buddies are obsessed with sex. They treat pornographic magazines like sacred objects and devise Jackass-ian (read: potentially fatal) ways to get off. In one scene, Naman ties his member to a ceiling fan and turns it on. The deed seems less pleasurable than it is a rite of passage for young men with idle hands and wandering minds.

Arora has an easygoing chemistry with his co-stars that’s reminiscent of early Noah Baumbach. In the great director’s early masterpiece, Kicking and Screaming, a group of reluctant college graduates substitute pop culture minutiae for the things they’d rather not say — particularly their shared fear of adulthood. “You all talk the same,” a female friend remarks.

In Brahman Naman, though, the foursome fear the opposite sex, who are treated both as objects of lust and hostility. Ash (Sindhu Sreenivasa Murthy) is a quiz groupie who makes her interest in Naman absurdly overt, in the way that girls in indie coming-of age movies often do. She’s intelligent and of Naman’s caste, so what’s the problem? Ash has acne, which makes her a kind of untouchable. To have the hope of kissing him, Naman forces her to wear a veil. The protagonist grows up just enough throughout the course of the film to potentially earn her love, but perhaps too late for Ash to wait around for him.

Although Brahman Naman sidesteps easy redemption, it’s heavily dependent upon its Western influences in ways that prevent the film from being its own unique creation. Ever the apt pupil, Mukherjee has clearly been studying up. The film is like a Hindi mashup of Rushmore, American Pie, and Napoleon Dynamite — a little precocious, a little gross, and a little too quirky for its own good — and it rarely comes alive on its own merits. Its pleasures inspire the gentle recognition of a spin on well-worn tropes, rather than its own earned insights.

The biggest problem with the film is its young male leads. Although Brahman Naman has a vague plot (will they win the big match?), it’s essentially a hangout comedy about boys who realize that the world, while abundant in theory, may promise them little. Naman’s family wants him to make carpets for a living. For such a film to work, the viewer should want to spend time with the characters and luxuriate in their surroundings. Mukherjee creates a Bangalore that looks lush and lived-in, but his male characters are so fiercely off-putting that you want to get as far away from the scene as possible.

Brahman Naman repeatedly straddles a fine line between juvenilia and the outright reprehensible. While partying with a rich, attractive classmate, Naman and Ajay debate taking an upskirt photo of a passed-out co-ed. They decline not because it constitutes a sex crime but because of their “conservative” upbringing. When a rival quiz hopeful refers to Naman as an “alcoholic” and a “sexist,” it’s like the voice of God bellowing through the clouds.

Those words are spoken by Naina (Anula Navlekar), a young woman who calls Naman on his shit the first moment the two meet, just strangers on a train. She points out, matter-of-factly, that he is in love with her. They share a thermos in between train cars, and she continues to speak with unbridled frankness. “It’s a funny thing about knowledge,” says Naina, when Naman pays her the backhanded compliment of remarking upon her intelligence as if it’s a surprise. “It’s been known for more than one person to have it.” This is the movie’s best scene, but like a speeding locomotive, it’s gone much too quickly.

Naina is a great character, willful, witty, and self-possessed. She would have been a great subject for a movie. It’s just too bad she’s relegated to teaching life lessons to yet another boy who doesn’t quite deserve them.