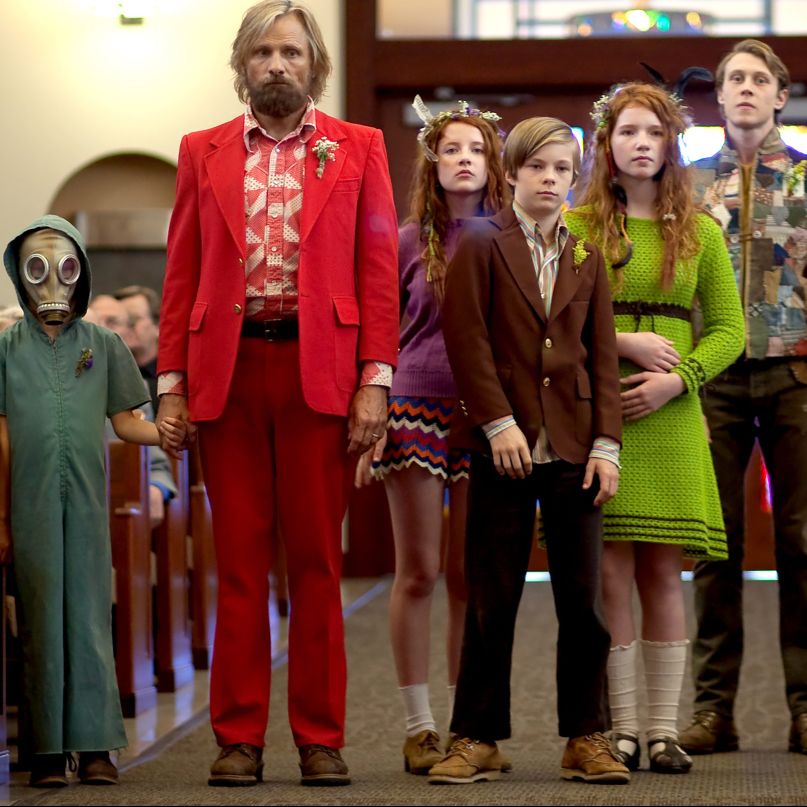 Captain Fantastic might give you some fierce flashbacks to one of the worst high school “types”: the Thoreau-fetishizing kid who might identify themselves as a sapiosexual or brag to potential lovers about how they were arrested at a protest. You know the one. The dipshit pseudo-intellectual who likes the idea of intelligence as a self-aggrandizing status symbol more than actual, challenged intellect. The kind who’ll grow up to ignore paying any of their taxes on the grounds that it’s the government who owes them, but isn’t above depending on familiars for help if life actually gets hard as a result.

It’s this dipshit ideal that drives Captain Fantastic, and it renders the whole film frustrating in byline and incessantly grating in execution. The film opens on a seeming idyll in the Pacific Northwest, a forest home where Ben (Viggo Mortensen) and his six children live in a kind of philosophical tableau. In the mornings they rise early, do chores, and enjoy demanding exercise. They pass the days learning basic skills like how to kill and prepare your own food, or how to make your own clothing. They read books, but only books of intellectual merit. There is virtually no technology in their camp/home, and in fact Ben rears them to loathe most modern inventions; they’re invented by predatory capitalists and used by mindless consumers, whose survival instincts have gone slack in the face of modern convenience.

Ben’s a consummate revolutionary, an idealist who refuses to let his children enjoy bourgeois culture but encourages them to celebrate Noam Chomsky’s birthday as a holiday where each kid gets one (practical) present. And his worldview goes on unchallenged until he goes down to a nearby town to call and check on his wife, who’s been hospitalized with an unspoken mental illness for some time, and discovers that she’s passed away. (Committed suicide, specifically, as Ben tells the kids; it’s imprudent to lie to children in any context whatsoever, after all.) It’s through this that the family leaves the forest, to pay respects to their departed mother despite the strong wishes of her parents, who hold Ben responsible for both her death and the “corruption” of the children.

Captain Fantastic functions at once as a skewed kind of redemptive indie road movie, and as a parable about the alternating joys and agonies of fatherhood. As the former, it’s shrill and steps on its own points early and often. As the latter, it’s marginally more effective on occasion. Mortensen gives a complicated performance within a character that more than a few viewers may find themselves wanting to strangle by film’s end. For all of the idealism on hand, Ben is a selfish man in a number of respects, one who isn’t above teaching his kids how to fleece a grocery store or refusing to allow them to attend their mother’s funeral, out of the fear that their grandfather (Frank Langella, strong but underused) may well try to take the only six people he has left away from him. And Mortensen grounds all of Ben’s cruelty in a kind of scarred vulnerability that’s effective, even if the character’s narrative turns do him few favors throughout.

Ben and his wife (seen only in hallucinatory flashbacks) wanted to raise their kids in a better world of their own creation, and it’s this ideal that makes his eventual cruelty and borderline dictatorial behavior all the more unsettling. When Bo (George MacKay, recently of 11.22.63), the eldest child, tells his father that “I don’t know anything,” it’s true in more ways than one. Ben has successfully bred a legion of precocious hyper-intellectuals who share in his dripping contempt for anything resembling a “normal” society, but he may have also ruined all his kids. Bo doesn’t know how to talk to a young woman they meet on the road, the kids don’t know how to relate to anybody except each other, and it even seems as though Ben has started to go a bit native in his time away.

Writer-director Matt Ross explores the question, early and often, of what exactly is so wrong with Ben’s choice of lifestyle for his family. He visualizes the forest home as a paradise, and the various suburban spaces and sprawling highways as a constricting force in contrast. Particularly in a stop with some of their relatives and their privileged teenage sons (played as obnoxious to the point of caricature), the gulf between the deafening volume of their hyper-violent video games and the family’s gentle forest home is massive. The trouble with the juxtaposition, in this case, is that Ross seems to firmly land on Ben’s side, even as the film peels back just how far he’s gone to maintain the life that he and his wife (and eventually, he alone) has decided is best for his family. It’s his right, but Ben is a toxic creation, a man willing to go as far as endangering the kids he claims to protect just to prove that his radical ideal is correct to those around him.

Captain Fantastic loses its intriguing premise in a muddle of ideas about the redemptive power of family and the right of all people to live as they please. Particularly in the film’s final minutes, which see it work through a series of escalating narrative copouts just to frame Ben as a sort of misunderstood punk hero, the film reveals itself as less of a thoughtful consideration of the lines between boldness and arrogant hubris and more of a prolonged rant about how great the world would be if we all just gave up our lazy social norms, read more of the “right” books, and handled anyone who disagreed with a condescending, above-it-all head pat. It’s a disappointing film, a strangely unintelligent handling of an intelligent idea. By the time Ben and his family show up to their mother’s funeral in loud, ostentatious attire, to give screechingly tone-deaf speeches in front of a grieving family in a fit of aren’t-we-great performance, you’ll find yourself just be left waiting for a moment of sweet reprieve from the lot.