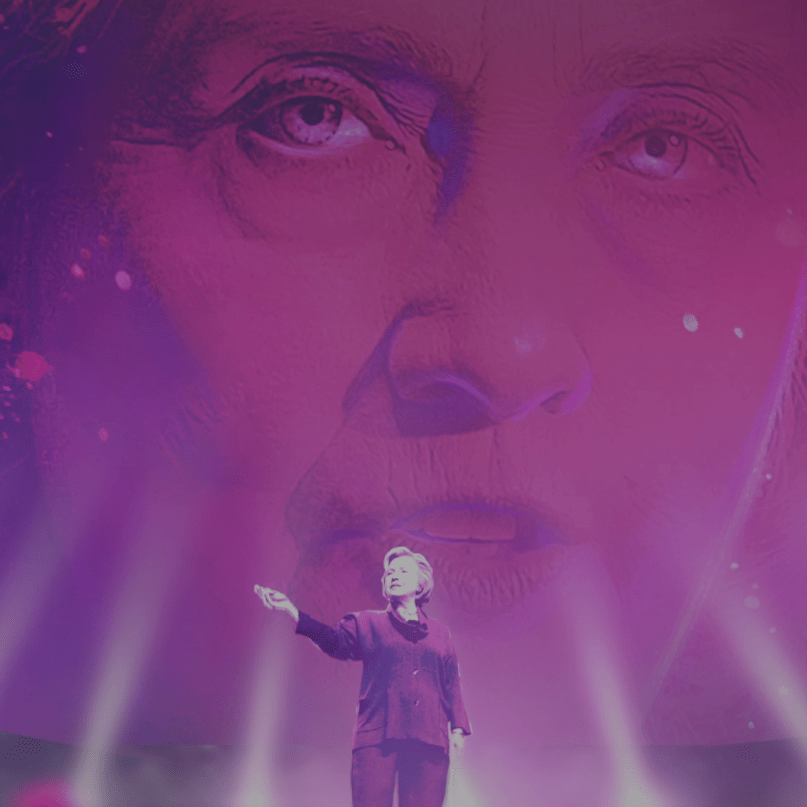 To pick a fight with a filmmaker like Dinesh D’Souza, or a film like Hillary’s America: The Secret History of the Democratic Party, is to give the two respective burning trash fires more credit than either warrants. After all, he can’t even get the title of his well-released smear piece quite right; there aren’t many secrets in Hillary’s America, and to be perfectly honest, there isn’t a ton of Hillary either. A film released just in time for the Republican National Convention, whether as a way to kill some time after Scott Baio’s speech or as an aperitif at the end of a long day of ruddy-faced screaming, Hillary’s America promises to convert the moderates, galvanize the faithful, and linger at no short length on all the ways in which the country’s going to hell if a Democrat wins another electoral cycle. So, here’s D’Souza once again to tell you who the real enemy is in a way designed to leave you asking as few questions as possible.

The first problem, among a litany of them, is that D’Souza’s been here before. Fans and/or avid hate-watchers of the filmmaker’s repeated affronts to the documentary genre will see no shortage of similarities between this and D’Souza’s earlier features. In 2016: Obama’s America, he raged about a number of vague points, easily predictable with a general knowledge of how world politics work in the modern era, and spends a few early minutes of Hillary’s America repeating those points at length, with flashbacks to that prior film, in order to establish that a) he is a person worth trusting, because he’s telling you he had these things right before, and b) that he told you so, America. In America: Imagine a World Without Her, a lovely people’s history that posited how Native Americans should just be grateful for the land that settlers did give back to them, he planted a number of anti-Hillary seeds among the anti-Obama invective just to hedge his electoral bets.

Those seeds haven’t grown into anything of worth, though, so D’Souza has to spend most of the portion of Hillary’s America that’s actually about the titular character dragging out the same “Saul Alinsky-ite” rhetoric used in America. As a whole, Hillary’s America is a work of repetition for a would-be documentarian and functional propagandist who only knows three speeds: elimination of context, shame, and fear. D’Souza has released a film every election year (or close to it) since a Bush wasn’t president, and as he will remind you occasionally during the film, he’s also a successful author over the same time frame. He is, above all things, an incorrigible shill.

Hillary’s America starts off in D’Souza’s characteristically modest house style; as a big band plays a variation on “Happy Days Are Here Again,” D’Souza is here to show you how, despite all these recent claims of racism and homophobia and violence against the Republican Party, it’s actually the Democrats who were slavers and Klansmen and rapists and political bullies and murderers. But before Hillary’s America can get to the real talk, it has to address what virtually nobody but D’Souza must have considered the elephant in the room: his indictment for campaign fraud two years ago. D’Souza served time for misreporting campaign donations, and accordingly spends almost twenty minutes at the beginning of Hillary’s America reframing his conviction as a smear job by the Obama campaign, a corrupt attempt to silence a cultural dissident with power. (This is driven home by a re-enactment of D’Souza’s trial, in which the contrite director has to weather a contemptible liberal judge openly laughing at the idea of a conflict of interests.)

D’Souza goes to prison, and after a number of quaint observations about how guys like him don’t typically wind up in jail, he sets about talking to people in the yard (almost exclusively non-white) about how street gangs function by conning innocent people out of their hard-earned money and manipulating them into thinking it’s normal. Tabling the utter hilarity of D’Souza’s desperate attempt to sketch out a central metaphor for his movie, and also his fundamental misunderstanding of what street gangs are and what generally sustains them, D’Souza sets out after being freed from prison to expose the Democrats for their true sins. Here’s a brief list of things for which D’Souza holds the party responsible, just in the early minutes:

-the terrorist attacks in Paris
-psychological evaluation in jail, which D’Souza refers to as “re-education”
-the coming of a “United States of Islam”
-putting away people like him, who don’t commit “real crimes”
-Social Justice, which is flashed onscreen as a buzzword with a red background at one point because D’Souza has figured out that cutting out the middle man and instituting Pavlovian conditioning is faster
-attempting to “steal America”

That last refrain is an idea to which the director refers often throughout Hillary’s America: the notion that Democrats are out to steal the country from hardworking Americans. But of the film’s 107 minutes, only the last half hour really touches on the upcoming election. Most of the film concerns itself with that subtitle: The Secret History of the Democratic Party. The film exists mostly to manufacture easily digestible arguments, with not a ton going on in the logic department, which will allow the (ideally receptive) viewer to debunk common liberal talking points. It’s a versatile tool. Through his History Channel-esque re-enactments, D’Souza serves up “edutainment” by the gross. For instance, the next time that college-aged Dem in your life tries to bring up the recent accusations of racism against the GOP, you too can launch into an extended rant delivered in D’Souza’s mix of condescension and paternalism about how the Democrats owned slaves, and Andrew Jackson was a Democrat and did horrible things to slaves and Native Americans, and how Ida B. Wells also upheld the Second Amendment, and and and and and-

The kind of film that D’Souza makes leaves little room for dialogue and far less for any kind of dissenting opinion. Hillary’s America doesn’t want to teach people how to push against the political status quo, after all; it’s well and truly in the business of the exact opposite. D’Souza wants to help you explain to the liberal in your life, or perhaps even straight to them, how childish and naïve and ignorant they are. At two different points in the film, D’Souza enters a Democratic history museum and later Hillary Clinton’s campaign headquarters, sneaks past any security, and makes his way into “restricted areas” full of hidden Democratic conspiracy secrets, because physically entering a visual metaphor is the level of subtlety with which he addresses the complex minefield of modern politics.

And while the film’s bombast is pretty damn funny up to a point, with its relentless score and “gotcha” informational structure living up to that “from a producer of Jurassic Park” tag as much as possible, Hillary’s America becomes dispiriting after a while when the sober reality sets in of people interpreting D’Souza’s mix of frothing rage and easy targets as fact. D’Souza builds strawmen for a willing audience to tear apart at the seams, all while assuring them that nothing they believe is wrong and that it’s actually those nefarious liberals trying to take your country away from you. His historical factoids are delivered with little to no context (for instance, it’s curious to know what some of the film’s target demographic might make of Wells’ notion that every black home should be armed to protect them from murderous whites), which leaves Hillary’s America to simply kick back and rile people up.

When the film eventually does tire of distilling history into the most Rupert Murdoch version of itself, the “Hillary” portion of Hillary’s America fares no better. Most curiously, D’Souza redraws the Alinsky connection in order to suggest that Hillary’s true goal was to push the scourge of “progressivism” (this year’s preferred trigger word) by taking the government over “from the inside.” While it’s heartening to see that D’Souza does indeed understand how politicians often have to be elected to work inside the government, it’s a loud whistle that does little more than rile the passions of those who see the country changing and want it to stop, to return to an equilibrium that “makes sense” with no interest in or regard for those who might think otherwise.

Hillary’s America is repugnant, and while it exists to get people who stand against it yelled at as much as anything, it’s essential that D’Souza not simply be written off as a hack pandering to a willing and lucrative audience regardless of the moral implications, though he is. D’Souza peddles the kind of “media” that’s become cancerous to the country he unyieldingly purports to worship. There is no dialogue, no other side of the story, no research. There’s little more than nonstop empty rage and a late call to action to agree with the film after it’s duly pummeled you into submission, and get out to those ballot boxes. The film never once offers solutions to any of its conundrums, or addresses the ostensible second option at the polls this year. It offers nothing more than loud noises and social flashpoints, letting an audience scream “NO!” at abortions and social change and “YES” at “America” and actively discourages any kind of critical thought along the way. It’s politics as a series of buzzwords, aimed squarely at an audience whose intelligence the film disrespects from start to finish.

In fact, let’s just conclude with an illustration of how D’Souza sends a happy, rallied audience onward into the larger world. After the film’s end credits (set to a country ballad about raising one’s voice and declaring how sick you are of liberals), D’Souza returns to the re-enactment of the language class he taught in prison for immigrants, and concludes with this sentiment, literally the last thing said aloud in the film: “How do you know when you’ve become an American? When you’ve become a Republican.”