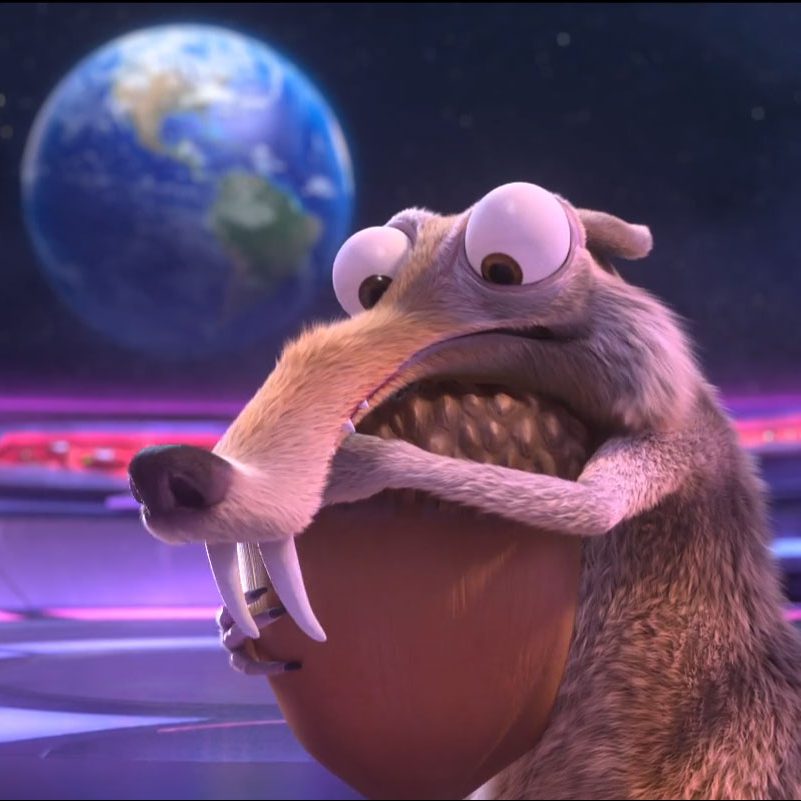 Here’s to a generation of pedantic little know-it-alls. Ice Age Collision Course nurtures them, empowers them, and welcomes them.

The fifth film in Blue Sky’s 14-year nest-egg franchise is opening in theaters across the country, and since the 2002 original, Ice Age, things have gotten a little screwy. In Ice Age: Collision Course, evolution is in fact a farce, for creation was literally the act of a prehistoric rat, trapped in a spaceship and knocking around planets arranged like a pool table triangle in a galactic game of pinball. Jupiter’s great red spot, an Earth-diameter storm visible on the surface of the planet? The mighty space rat did that in a little fender bender. The moon hovering around the Earth? An accident with a flying saucer’s tractor beam. Scrat even triggers the Big Bang, and creates the constellations in his image. Oh, righteous Space Rat, it is all so strangely beautiful. And scientifically baffling. But kinda funny.

And that’s the giddy little cosmic joke of Ice Age: Collision Course, a loose romp of science and sensationalism in an otherwise cooled-down franchise. Think Duck Dodgers meets Itchy & Scratchy inside of The Land Before Time. Here, dinosaurs, mammals, and chummy weasels live together, and the creators are all well aware of the problems in depicting such history. (The film even touts a glorified Degrasse-Tyson cameo to assure audiences over how dumb everything sounds.) Parents will nap, some kids will be amused, and the nerdiest viewers will have good reason to point out flaws in the movie’s not-so-intelligent designs. In the beginning, there was the Space Rat and the Earth, says Collision Course.

Come to think of it, let’s go back in time on this franchise. The first film was about unlikely creature buddies. There was a woolly mammoth named Manny (Ray Romano, totally in it for the money), a sabretooth tiger named Diego (Denis Leary, coasting on a sneer, likely also in it for the money), and a sloth named Sid (John Leguizamo, enthusiastically geeky, lisping, and still giving it his all). Since the first film, the three have made families, dodged logic, met new characters, and run a spectrum of sitcom actors given 15 lines at a time. (This newest entry features Modern Family’s Jesse Tyler Ferguson and Nick Offerman, in tiny parts.) The recurrent message: creatures across all of Mammalia can get along! This franchise has built up a tiny universe of loudmouthed critters from that core trio of characters. Sight gag, profit, repeat.

This chapter, however, spells possible extinction, as a large asteroid is hurtling toward Earth. Will Manny reconcile with his rebellious daughter in time? Will Sid find a mate that will put up with him? Will Leary put a cigarette down long enough to read his meager lines? Will the film give distinct actresses like Jennifer Lopez, Queen Latifah, and Wanda Sykes more than a few words of dialogue (answer: no)? Only a Hail Mary scheme involving magnetic crystals being shot out of a volcano at the end of 94 minutes’ worth of science and gross-out humor will answer for anything.

Now, computer animation has come a long way since 2002, and the film’s color wheel of vast geodes, purple skies, and rodent cocktail bars are something marvelous to behold. The humor, while frantic, sneaks in odd, unexpected gags here and there. When Sid says that the coast is clear after a meteor shower, only for a gag explosion to occur right in his face and leave him with burnt ember nipples, it’s delightful absurdism in the vein of Looney Tunes. And there’s a manic, enjoyable weasel by the name of Buck that resembles Errol Flynn on speed, flying and singing through trees to the tune of The Barber of Seville. And again, the bunk science is almost like a provocation to the audience, which is amusingly uncommon in a kiddie romp like this.

But here we are with a $2.9 billion series, blasting out the funnies as fast as it can before the narrative and/or commercial end is nigh. Ice Age: Collision Course will babysit kids starting next spring on home video, but perhaps the Ice Age series could benefit from finding some fresh new life later in history. As for now, it’s just more anarchy in the BC.