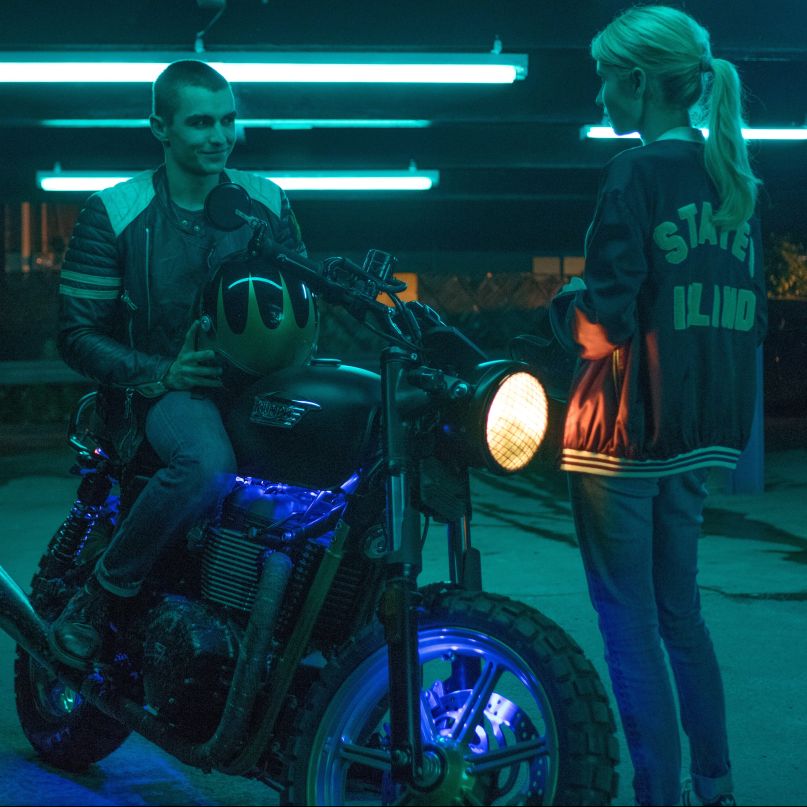 Co-directors Ariel Schulman and Henry Joost’s documentary Catfish offered an eye-opening revelation about social media’s ability to present ourselves as we’d like to be, even if the truth is sometimes less glamorous. Schulman and Joost’s latest collaboration, the teen thriller Nerve, throws little bits of The Purge and David Fincher’s The Game into the current trends of social media virality and augmented reality games, and the film surprisingly hits more often than it misses.

Based on a novel by Jeanne Ryan, Nerve posits a world in which the titular underground social media app (let’s call it Evil Snapchat) encourages its users to be either ‘Players’ or ‘Watchers’. Watchers pay a flat fee per day to watch Players run out into the world to perform a series of escalating dares for both money and followers. As clumsy as the metaphor is at times, it’s laudable that the concept somehow folds everyone’s fears about Facebook, Uber, Instagram, Periscope and Pokémon Go into one neat little package.

In the film, Nerve’s latest unexpected star is Venus Delmonico (Emma Roberts), a Virginia Woolf-reading, old-fashioned camera-wielding supermodel who doesn’t take risks and plays it safe in the midst of the public mania over Nerve. That is, until peer pressure from her Nerve-star friend Sydney (Emily Meade) leads her to start a series of increasingly popular Nerve dares with the wry, handsome, and mysterious Ian (Dave Franco). As Vee enjoys her newfound fame, however, the game takes control of her life in unexpected ways, testing her friendships and even threatening her safety.

If it’s okay for the Purge series to be nail-on-the-head obvious about its political metaphors, Nerve should be allowed a little leeway for its amped-up view of social stardom. After all, Schulman and Joost get a lot of mileage out of Nerve’s interfaces and overlays, the camera moving through smartphones and laptop screens like something out of Minority Report. The Internet stuff is a bit goofy and on-the-nose, but it meshes organically with Michael Simmonds’ neon-tinged cinematography. One recurring image, of the New York City skyline punctuated by colored lines indicating characters’ positions by their Nerve handles, is particularly striking and effective as a method of establishing geography.

For the first two-thirds of the movie, provided you can get behind the concept, Nerve actually turns into a relatively nuanced exploration of virality’s effects on young people’s relationships and sense of identity. Jessica Sharzer’s screenplay is spotted with some cringingly overstated dialogue at times (“It’s easy for you to be brave behind your screens!” Vee hollers at a crowd of onlookers late in the film), but she manages to explore different ways in which the app simply amplifies the existing tensions between young people. Peer pressure, lovesickness, and teen jealousy existed long before social media – the Internet has just made it much easier to apply that pressure.

While Roberts and Franco are reasonably charming and engaging in their roles, what’s most remarkable is the dimensionality Nerve gives to its supporting cast, particularly Meade’s Sydney. Syd starts out as the popular ‘mean girl’ who keeps Vee around as the boring friend who makes her look good, but over the course of the film admirably juggles her jealousy over Vee’s increased popularity with genuine concern over her friend’s well-being. It’s their friendship that proves more genuinely engaging than the ephemeral thrills of the dares.

For all of Nerve’s initial charms, though, a lot of that goodwill is thrown away in its sledgehammer of a final act, which abruptly shifts the film into action-thriller mode. Users are warned that “snitches get stitches,” and reporting Nerve to the police (who apparently don’t have access to the App Store) may have life-threatening consequences, as the dares become increasingly more dangerous. While raising the stakes isn’t necessarily a bad idea, the resolution is bafflingly ludicrous, including quite a few creaky ‘90s clichés about hacking as these otherwise interesting and personal stories take the backseat to a simplistic journey to take down the system.

Nerve is refreshing and frustrating in equal measures, mining a genuinely inventive concept for some memorable, Mean Girls-esque pathos about the ways in which the Internet is changing and magnifying social structures for young people today. It’s just a shame that Schulman and Joost expand the scope of the story beyond the characters and into the kind of violent, high-stakes pageantry typical of teen summer thrillers. Let’s just hope and pray that Pokémon Go doesn’t result in everyone battling to the death as well.