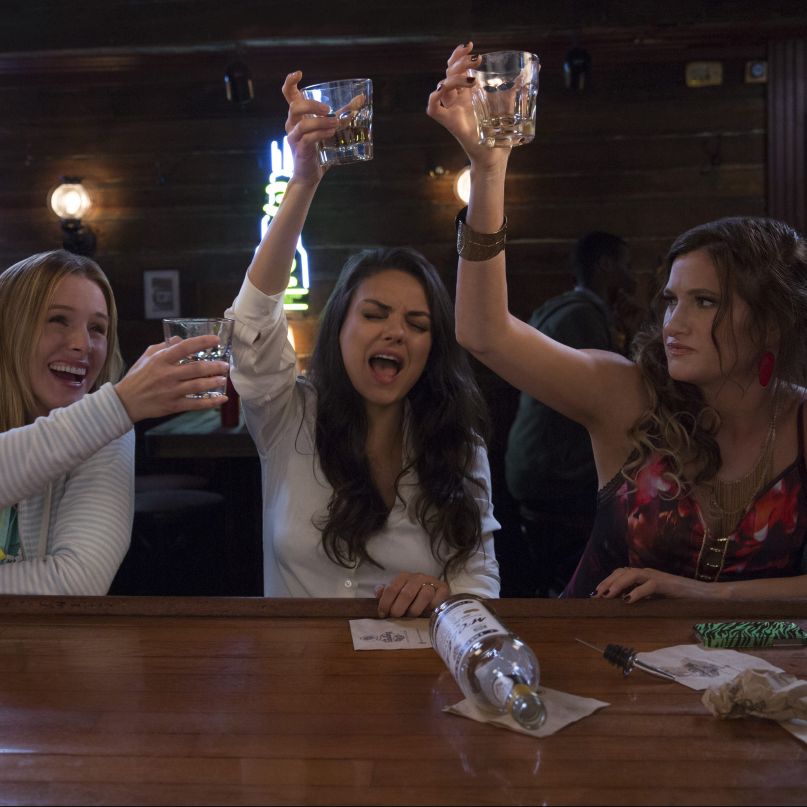 Bad Moms defies the obvious openers one might expect in a review of a movie with that title. No, it’s not bad. No, it’s not very good. Bad Moms falls somewhere in between, neither delivering the unabashed debauchery its name implies, nor neglecting the emotional realities of its titular moms. It’s a frustrating cocktail, but like the cheap wine swilled throughout the film by its heroes, Bad Moms still manages to get the job done.

That’s mostly thanks to its largely female ensemble, the core of which can be divided into two groups: bad moms and bad guys. The former is led by Amy (Mila Kunis), who tells us in an early, awkward exposition dump that she has two kids, an unhelpful husband, a job with a bunch of youngsters, and a whole world of “perfect mom” pressure on her shoulders. Through Amy, we’re introduced to the ringleader of the latter group: villainous PTA President Gwendolyn (Christina Applegate, clearly having a ball), an elegantly coiffed despot who makes Mean Girls’ Regina George look downright loveable.

When one of Gwendolyn’s PTA meetings pushes Amy right over the edge, Kunis finds her own clique, and that’s when the film finally picks up steam. Kathryn Hahn and Kristen Bell, respectively playing the hard-drinking single mom Carla and teoverwhelmed shut-in Kiki, are handed the lion’s share of the punchlines in Jon Lucas and Scott Moore’s inconsistent script, and they deftly swing for the fences at every opportunity. More importantly, they offer up the bulk of the film’s emotional heft, balancing the jokes about dicks and whippets and fistfights in the Trader Joe’s parking lot with honest-to-god compassion and concern for their kids, their friends, and even their foes.

Unfortunately, supporting characters are just that, and the majority of the film focuses on Kunis’s Amy, a character too flat to be worthy of the talented performer filling her shoes. Kunis can be much funnier, and much more empathetic, but here she’s largely saddled with marching us through the plot, setting up others for the jokes, and telling us how exhausted she is without ever really showing us why. Yes, these women — and Amy in particular — are overwhelmed, overworked, undersexed, and vastly underappreciated. But when they embrace the “bad” part of “bad moms,” they do so with seemingly unlimited funds, constantly available babysitters, and few consequences beyond hangovers and pissed-off kids.

But if Lucas and Moore do their six stars — Applegate’s joined by toadies Stacy (Jada Pinkett Smith) and Vicky (Annie Mumolo) — a disservice with their muddy script, it’s nothing compared to the problems heaped upon the film by their direction. The Hangover writers also step behind the camera here, filming the whole thing like it’s a cross between a laundry detergent commercial and an episode of Desperate Housewives. Intrusive pop tunes let the audience know exactly what to feel at any given moment, choppy editing means the film itself sometimes steps on Hahn and Bell’s very funny toes, and an inconsistent tone jolts the story between satire and sap without any particular warning.

Still, Bad Moms has heart, and plenty of it. It’s got more than a few solid jokes. It has moments that may make audiences cheer, particularly if they’ve had a few. There’s even a surprisingly moving credits sequence, which no viewer should miss. Bad Moms isn’t going to break any barriers, and it’s not going to land itself a spot in the comedy hall of fame. But sometimes a person deserves a break from it all, and for about 100 minutes, this top-notch cast offers just such an escape. Hire a babysitter, sneak in a flask, and enjoy.