Has Charlie and the Chocolate Factory Sweetened with Age? 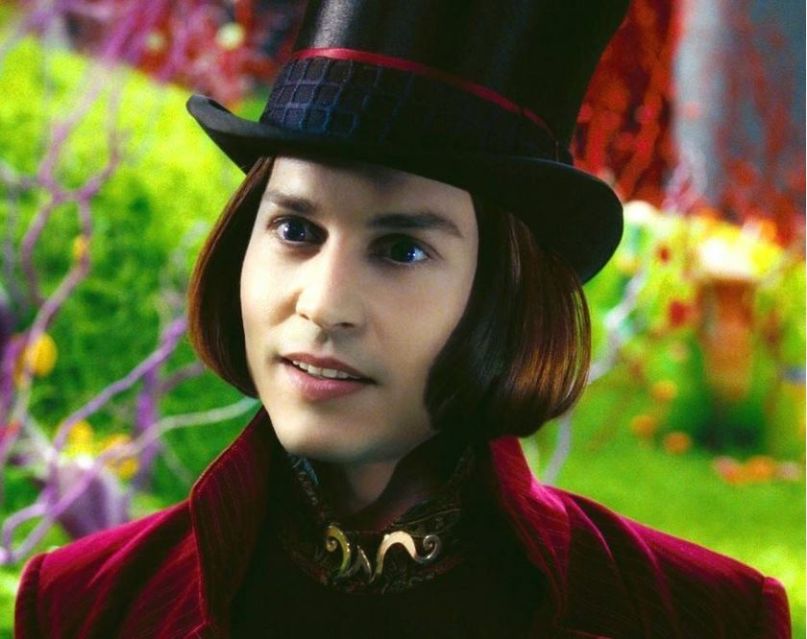 Page to Screen is a monthly column in which Matt Melis explores how either a classic or contemporary work of literature made the sometimes triumphant, often disastrous leap from prose to film. This time, he punches his golden ticket to revisit Tim Burton’s adaptation of Roald Dahl’s Charlie and the Chocolate Factory.

Adapting a children’s novel that has already been made into a beloved film paints a bull’s-eye squarely on the filmmaker. No doubt director Tim Burton understood this when he opted to bring his singular cinematic style to author Roald Dahl’s tale of a poor boy, an eccentric confectioner, and his fantastical chocolate factory. Flanked by screenwriter John August and his own Willy Wonka (Johnny Depp), Burton paddled against the rushing chocolate river of adoration that accompanies Mel Stuart’s Willy Wonka & the Chocolate Factory – a film that takes over our televisions during the holidays, boasts one of the most recognizable characters in movie history (Gene Wilder’s Wonka), and features a handful of memorable songs that bubble like fizzy lifting drinks.

Upon its release in 2005, Burton’s treatment of Charlie received feedback as mixed as an assortment of Wonka’s most savory sweets. Most critics lauded the film’s visual extravagance while maintaining reservations about Depp’s portrayal of Wonka, which exuded none of the warmth or charm of Wilder’s more endearing version. And while families indeed flocked to theaters (the film grossed $475 million worldwide), the general consensus suggested that the public only had a permanent place in their candy hearts for one cinematic chocolate factory – and it wasn’t Burton’s. That’s not an astonishing verdict given the director’s polarizing storytelling and visual styles, the latter of which audiences tend to find either breathtaking or nauseating. After all, chocolate and an upset tummy are an unpleasant pairing.

A decade later, Stuart’s Chocolate Factory continues churning with the shelf life of an everlasting gobstopper while, by comparison, Burton’s factory feels shuttered, with the Oompa-Loompas likely having been deported into the vicious clutches of whangdoodles once their work visas expired. Can this be a fair fate, though? Is Burton’s film really “an insult,” as the characteristically mild Wilder un-mildly commented a couple years ago? Does Charlie deserve to be remembered and discussed in its own right rather than merely as a point on the continuum of Burton’s filmmaking career? A decade removed, maybe we’re finally able to determine whether this particular blend of Wonka’s chocolate sweetens or grows bitter with age.

For those who first met and fell in love with Charlie through Dahl’s novel, Burton’s adaptation offered hope of a more faithful trip to Mr. Willy Wonka’s chocolate factory. Dahl, despite having worked on early scripts for the 1971 film, came to disown Stuart’s adaptation. In addition to a casting disagreement (Dahl preferred British comedian Spike Milligan as Wonka), the author also objected to several plot deviations (like the fabricated fizzy lifting drinks scene), the entire Slugworth subplot (invented by uncredited screenwriter David Seltzer to create a villain), and a perceived shift in focus from Charlie to Wonka as the main protagonist. Insult perhaps followed these injuries when Dahl alone was credited as the screenplay’s author in the film’s famous, mouthwatering opening titles. One almost has to wonder if Dahl didn’t dream up some confectionery comeuppances for the responsible parties.

With Dahl’s widow, Felicity Dahl, on board as Executive Producer, certain concerns of her husband were absolutely remedied in Burton’s version. Charlie once more became the titular character, 007 Slugworth’s mission got aborted, and the fizzy lifting heist, which partly decarbonated Charlie’s bubbling integrity, got poured down the drain. Additionally, trained squirrels, not an educated eggdicator, remind us that Veruca is a bad nut rather than a bad egg (semantics, though her squirrelly fate feels far more devious and delightful), and longtime Burton musical collaborator Danny Elfman extracted lyrics from the actual Oompa-Loompa songs found in Dahl’s novel. While these changes definitely claim some authenticity for this particular adaptation, where Burton, August, and Mrs. Dahl truly succeed in channeling the spirit of the novel is in capturing its dire and, at times, quite dark tone.

From the opening exterior shots of Burton’s film, we see a bleak industrial town with Willy Wonka’s factory looming tall above the Buckets’ home, a slanted shack that appears to be one stiff gust from folding upon itself. Charlie goes to sleep each night staring through a hole in the house’s roof, not so much as a pane of glass separating him from the wind and snow or obscuring his view of the chocolate factory. In Dahl’s novel, Charlie obsesses about the factory, inhaling the smells as he passes its gates each day. In the film, we see that same obsession. Charlie decorates his room with candy bar wrappers, drawings of Wonka’s factory, and even a scale model made out of irregular toothpaste caps his father brings home from work. Wonka’s factory, in plain sight, represents everything Charlie and the Buckets don’t have and likely never will have — including enough food to survive.

When winter sets in and Mr. Bucket loses his job, the Buckets don’t tighten their belts like most families might — because there’s nothing left to tighten. As a family, they begin to starve. Dahl not only relates the hunger Charlie endures as he tries to make it through the days on almost zero nourishment, but depicts him as stunted by the lack of food and, on multiple occasions, describes him as a skeleton. Burton has commented on casting actor Freddie Highmore as Charlie in part because he naturally looked gaunt and underfed. It’s an important detail. The Buckets aren’t merely looking to catch a break to ease their struggles; they need a miracle just to survive. In the novel, when Charlie finds some money in the snow, he doesn’t run to buy a Wonka’s Whipple-Scrumptious Fudgemallow Delight to look for a golden ticket. He gobbles it up in desperation and then guiltily spends money on a second, which contains the fifth and final ticket. Similarly, Burton’s Charlie believes the last ticket has already been found when he purchases his lucky candy bar. Neither Charlie is looking for a prize, only something to quell his hunger. In titling this chapter “The Miracle”, Dahl speaks of stakes far more than touring a chocolate factory, even one as famous as Willy Wonka’s.

Nothing about Burton’s chocolate room — not even the real chocolate river — looks appetizing, his visual palette making everything appear far too decadent and alien to be eatable, um, edible. But that same style that makes the candy look so unappetizing perfectly draws out the unsavory characters of Charlie’s fellow golden ticket holders. Just by looking at them, we know something has gone terribly wrong. They appear misshapen, overripe, and spoiled in some way. Like one of Sherwood Anderson’s grotesques, some unfortunate aspect of their characters has made them grow strange and repulsive. Augustus Gloop is a greedy glutton, Veruca Salt a spoiled brat, Violet Beauregarde a win-at-all-costs competitor, and Mike Teavee an antisocial couch potato, and all appear ghastly alongside a thin but normal-looking Charlie, who Dahl describes as “The hero.” In a story that largely comes down to weeding out the bad children from the good, Burton’s visual style effectively does most of Mr. Wonka’s vetting for him.

Plenty about Charlie still doesn’t digest well, though, and much of that criticism falls on Depp and Burton’s baffling take on Willy Wonka. In interviews, both have likened the character to a “local children’s show host — a guy who definitely puts on a face every day.” Tired Michael Jackson comparisons aside, this Wonka is an odd fish, naturally recoiling from others and so socially awkward that he requires cue cards to function in simple conversation. It’s a far, far stretch from Dahl’s Wonka, who isn’t incapable of normal interactions, just aloof, a genius with maybe one too many candy-making ideas bubbling in his brain to allow his priorities to match his guests’. But Burton and Depp go well beyond showing the quirks of Wonka being locked up in a factory for years with only doll-sized Oompa-Loompa’s for company.

You guessed it, boys and girls. Origin story. They laid the chocolate maker down on a couch for psychoanalysis, and, wouldn’t you know it, this Wonka has daddy issues. (As George Carlin once said, “Hell is full of dads.”) Never once when reading Dahl’s novel, or watching Stuart’s adaptation for that matter, does one wonder where someone like Willy Wonka comes from; audiences are more than willing to believe that such eccentricity could spring from genius and that such genius exists. But Burton and co. succumb to that modern Hollywood temptation of trying to explain … everything. In storytelling, when we scratch away at a character, sometimes we do discover an unexpected shine from beneath the surface; in this instance, though, our beloved chocolatier just loses his luster. It’s a choice that only distracts from the irresistible premise behind Dahl’s novel.

As mentioned before, one of Dahl’s criticisms of Stuart’s 1971 adaptation is that Charlie takes a backseat to Wonka. That’s debatable, but they arguably do become co-protagonists. In Burton’s, though, we get the full-fledged Willy Wonka Story, including a complete break from the novel’s ending in order for the candymaker to resolve matters with his dentist father. Charlie still shines as a mentor who teaches Wonka a lesson — perhaps making the boy heroic in a different sense than Dahl intended — but we’ve drifted so far from the delightful premise of the novel, a timeless cabbage soup-to-chocolate bars tale. A goodhearted boy who has always gone without while less-deserving children have gorged themselves on easy street their entire lives finally gets his golden ticket and a taste of the sweet life. We delight in the sweet, devilish justice doled out in Willy Wonka’s factory. Unlike the real world, here is a place where the good get punished and the rotten get rewarded … wait, strike that, reverse it. It’s a simple but delicious idea — a fantasy where people actually get what they deserve — and far more amusing than playing pseudo-shrink.

The small writing hut in Dahl’s garden still sits much as he left it when he died in 1990. The cozy shed, full of homemade creature comforts, is where the author rewrote Charlie, by his count, five or six times. That Charlie and the Chocolate Factory has yet to make it to the big screen. Stuart’s classic lightens the stakes and tone, and Burton’s promising reimagining ultimately distracts itself from the heart of the tale. But that’s the nature of adaptations. As much as filmmakers may love a story, no two will retell it the same way, and none will ever look upon it precisely as its author does. In other words, it might take another miracle for Dahl’s most golden ticket of all to find the same shimmer on the silver screen. But as Charlie teaches us, miracles can happen.