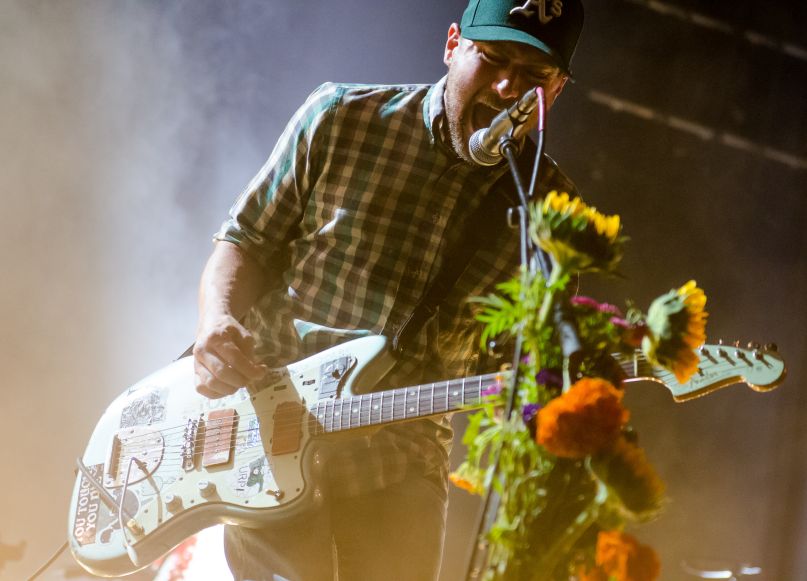 When someone shows you a concert bill that has Modest Mouse and Brand New listed together at an iconic arena like Madison Square Garden, it’s not unreasonable to anticipate the former would be the closing set and the latter (sorta) hometown heroes would open. Looking at the general public’s knowledge of each band and their respective catalogs, that’s a fair expectation. But last night’s show inverted any attempt at what expectation even means.

For one, Isaac Brock and company did indeed take the stage first. For another, the alternative veterans are known for putting together vastly different setlists on any given night, a move which usually leads to the excitement of the unknown for most acts. With Modest Mouse, however, it’s become more of a crapshoot. The unpredictability means you’re never quite sure what sort of set you’re going to get: either pure gold, pyrite, or something in between. Thursday’s set was, unfortunately, one of those fake gold rings dusted on the outside with the real deal.

Crowd favorites peppered the set, like opener “Bury Me With It”, “Dashboard”, and “3rd Planet”, as did deeper cuts like “Night on the Sun” and “Tiny Cities Made of Ashes”. Still, by the time they got towards the end of their time, there was a bit of detectable listlessness. They lackadaisically switched up their planned setlist, and pretty much everything after “Missed the Boat” came off like they were just trying to get to the end of their set.

There was one big spark right at the finish, as Brock turned to a slightly confused and instrument-less Jim Fairchild and said, “You’re gonna need a guitar for this, Jim.” In the same breath, he screamed out, “This plane is definitely crashing!”, the opening lines of “Shit Luck”. Yet even that rager felt cut short, a single encapsulation of the entire set’s uneven ebb and flow.

The crowd, 95% of which was clearly there for Brand New and only Brand New, were largely uninterested in the entire performance. While there were a few Modest Mouse diehards (one guy up front wearing a Brand New shirt was even singing every line), there were considerably more lifeless youth leaning on the rail, waiting for something to grab their attention. And the band certainly has the talent, repertoire, and (most of the time) the energy to turn in stunning live performances, but they weren’t connecting this time out, and it frankly felt like they were only half trying for the most part. The set was fine — maybe even pretty good — but in a greedy venue like MSG, it needs to be more than that.

And this is where it suddenly made perfect sense that Brand New were the final act. It certainly was appropriate for the setting, as Jesse Lacey and the Long Island boys haven’t played a true headlining set in the city since — get this — 2009, according to Setlist.fm. There was an intimate gig in Brooklyn in 2013, but for a local favorite to stay away from major venues in the area for that long is practically unheard of, and for their fans, a true crime. So having them take the top spot as this co-headlining trek came through was nothing if not fitting, even as it was unanticipated by many. After all, how many emo-leaning pop punk outfits can headline Madison Square Freakin’ Garden?

Lacey took the stage with an understated innocence, introducing his band with a simple, “Hello, we’re Brand New” — as if the entire arena didn’t know. It was a humbleness that showed multiple times throughout the set, like when he was thanking the crowd and the house lights all went up, revealing the full scope of the crowd to the frontman. “Well, I didn’t need those lights on,” he said shyly. “I was pretending it was just these five rows right here. It’s a little more nerve-racking now.” Nerves be damned, though, because the band came out strong and they came out hard, dropping “Sink”, “Gasoline”, and “Millstone” right off the bat. It’s amazing that they could open with two tracks from their least appreciated record — 2009’s Daisy — and show how even their lower points are packed with highs.

Unlike the evening’s openers, it’s far easier to know what to expect from a Brand New setlist in terms of structure; even the stage hasn’t changed much over the years, except for perhaps a few dozen more flowers being weaved across their equipment. Even so, it’s the ferocity with which the songs are delivered and the subtle touches that keep things interesting. It’s the way “Sic Transit Gloria… Glory Fades” can transition so well into the slower paced “Okay I Believe You, but My Tommy Gun Don’t”, two tracks with different energies yet somehow the same passion. Or how a nearly impeccable song like “Limousine (MS Rebridge)” can be altered slightly throughout and given an extended outro, with the final refrain being belted out a handful more times than on record, and not lose a drip of its power.

Those sort of shifts could crash in a giant arena like MSG, but it was quite the opposite last night. That’s how Brand New succeeded in ways that Modest Mouse didn’t. The setlist was great, though there was some potential room for it to be even better (where were the new tunes or recently re-recorded rarities?); yet they played it like it was the most awesome show they could give, and so that’s what it felt like.

It’s how it needed to feel, too, if all those murmurs of their impending breakup prove true. There was something in Lacey’s demeanor in the few times he spoke that seemed to hint as much. As he came out alone to launch the encore with “Play Crack the Sky”, he told the rapt audience, “I wanna say thanks in the right way, but there’s really no words.” His voice was filled with a sweet sadness, one that gave the impression they really are winding down. If they are, it’s clear they’ve got one more album in them and likely a tour in support, meaning there’s a fair chance this won’t end up as their final NYC gig. Should that unexpectedly turn out to not be the case, however, at least Brand New will have delivered a performance of which both fans and band members could be proud.