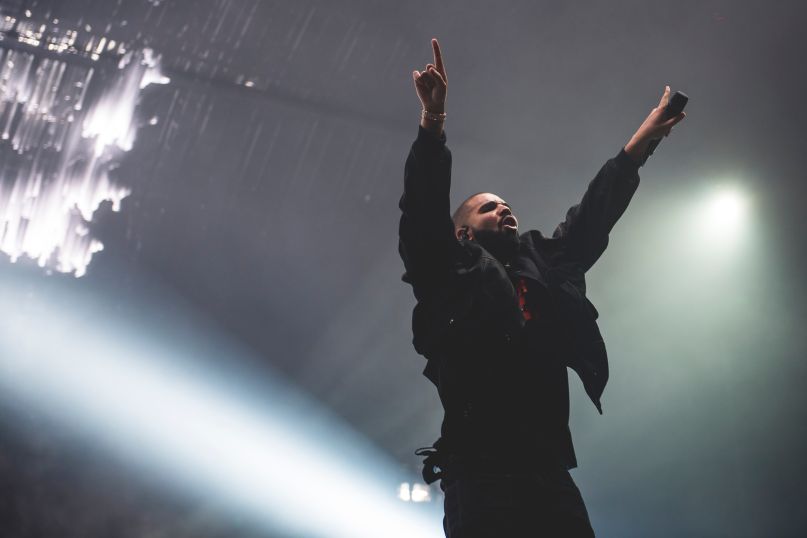 It’s no secret that Drake thinks highly of himself — his song “Legend” boldly asserts his immortality as an artist, living or dead.

The concept was less than convincing when the Toronto rapper opened major shows with that tune last year at Coachella and Austin City Limits, then proceeded to stop-start through snippet-packed sets in which he struggled to appear larger than life and more like one small man strafing across an enormous stage. But by the time he’d busted out that anthem to close his nearly two-hour set last night at Austin’s Frank Erwin Center — the first stop of the Summer Sixteen Tour, co-headlined by Atlanta trap sensation Future — he’d cleansed any doubt that his legacy will last far past his lifetime.

“This is the first show of the tour, and ya’ll got me feeling like this is the best show of the fucking tour,” he harped after ripping through the opening hat-trick of “Summer Sixteen”, “Still Here”, and “Started From the Bottom”.

Given how insatiably energized he appeared throughout the entire affair, it didn’t feel at all like he was blowing smoke. And Future expressed a similar sentiment during his literally fiery, 28-song, high-octane set, which drew overpoweringly loud, all-in chants during highlights “Fuck Up Some Commas” and “Jersey”.

Drizzy abstained from joining on the latter collabo, but got his biggest boost when his Atlanta counterpart joined late in his set for a six-song run that peaked with a pyro-packed rendition of “Big Rings” and ended with the chill vibes of “Diamonds Dancing”. Future’s presence overall was an enhancement, but for Drake in particular, every element of this explosively energetic tour kickoff — from his nearly 50-song, career-spanning set list to the dazzling production — felt like the answer to all criticisms recently thrown his way.

Of course, many of the cuts included were, again, snippets strung together. But where last year’s jaunt saw his mojo continually stifled by constant starts and stops with too much gabbing between songs, the flow of this show rarely dipped long enough for adrenaline to dissipate. His movements were downright ferocious early on as he challenged the audience to “keep up” with a medley of non-stop hits: “0 to 100” > “The Catch Up” > “6 God” > “No Lie” > “Versace” > “Over” > “I’m On One” > “Up All Night” > “Miss Me”, all in a matter of minutes. He only slowed down briefly for a few slow jams — “Fire & Desire”, “Come and See Me”, and “Faithful” (featuring opener Daniel Daley of DVSN) — where he proved his equal worth as an R&B singer.

All the while, the production eradicated any notion of the stage swallowing him up. Platforms laden with LED screens constantly rose and fell around him, filling up empty spaces. Hot-as-hell multi-colored pyro accented what seemed like every other song (third to last track “Know Yourself” concluded with an all-out fireworks finale that sparked a deafening standing ovation). And most impressive of all was a canopy of glowing balloons suspended by nearly invisible strings that enhanced “Hotline Bling” mid-show, then continued to rise, fall, and rotate in varied colors and patterns (including a massive red “6” looming overhead when Future joined for “Grammys”) throughout the remainder of the show. The concept was genius: From all vantage points in the 17,000-capacity arena, the multi-dimensional balloons bridged any void between performer and audience, making the experience feel fantastically intimate despite its actual enormity.

Whoever designed that shit deserves an award – it was on par and more extraordinary in spots than Beyoncé’s mind-blowing Formation World Tour setup or anything Kanye has ever done. Drake deserves equal creds for surrounding himself with such first-rate conceptualizers. And for all his egocentric lyrical boasts, he gets more mad kudos for using his show to disseminate a timely message, all the while making sure the fans know he’s nothing without them.

“Every day you wake up is a blessing,” he said amid three of his fiercest cuts — “Hype”, “Know Yourself”, and “Energy” — before closing on sing-along “Legend”. “You could make a change in your life or someone else’s, so please … stop the bullshit. That goes for everybody. I want to see all these faces at the same concert … I don’t want to lose nobody in this building because I’m going to go work on a new album and come back to Austin, Texas. I love you more than you’ll ever know.”

As much as the Summer Sixteen Tour is “the party of a lifetime” that he promised at the start of the show, it’s also an assertion of Drake’s masterful artistic fluidity, his surefire vehicle to Hall of Fame status and beyond.

Setlist:
Summer Sixteen
Still Here
Started from the Bottom
Feel No Ways
Childs Play
Fire and Desire
Come and See Me (PARTYNEXTDOOR cover)
0 to 100 / The Catch Up
6 God
Worst Behavior
We Made It
Blessings (Big Sean cover)
All Me
No Lie (2 Chainz cover)
Versace (Migos cover)
HYFR (Hell Ya Fucking Right)
Keep the Family Close
9
U With Me?
Headlines
Trophies
Faithful
Pop That (French Montana cover)
Over
I’m On One (DJ Khaled cover)
Play Video
Up All Night
Play Video
Miss Me
Play Video
Crew Love
Play Video
Hold On, We’re Going Home
The Motto
Right Hand
For Free
My Way (Fetty Wap cover)
Hotline Bling
Back To Back
Work (Rihanna cover)
Take Care
Too Good
Controlla
One Dance